I recently acquired an acoustic coupler, and I am wondering how to use it properly. I can get it to generate the carrier if I whistle into it. I tried that when I connected it to the terminal and when I pressed buttons it changed the modulation.

I press a button labeled AC DAA, and it stops generating tones when I whistle.

The foam covering the mic and speaker has started to disintegrate. What kind of foam should I replace it with, and how do I possibly remove the rubber cups?

I did a quick search looking for the above info, but all I get are results for modern modems.

What make and model of coupler is it?

Most couplers need to be manually set to be the ANSWERING modem or the ORIGINATING modem by a switch.
O

The modem is made by Tek-Com Inc. There is no discernable model number. Stand by for some pictures.

Well, DAA stands for "direct access arrangement", a bit of kit leased out by the telcos just after the Carterfone decision that allowed a subscriber to connect to the phone lines with an isolation circuit. Before that, the only way to hook up to the telephone lines was with an acoustic coupler. Any direct hookup had to be performed by the telco--no exceptions.

So that switch changes between the coupler and the direct hookup. DAA's were not sold--you paid for their installation on your line and you paid a monthly charge for the lease.

The coupler cups were made of neoprene foam, usually cast in a shape to accept a standard handset.

Thanks for the help guys. So it probably is just that my modem is originate only. I can verify that the modem does not have a switch for the handset because I can activate the carrier by whistling.

There is a small hole on the side of the modem that leads to a potentiometer, I assume that that would be the volume for the modem's speaker.

Yes, almost certain originate-only, given the time of manufacture. The reason that answer-only modems were less common was because those were usually hooked directly to the phone line, were often rack- or shelf-mounted (mainframes and minis used them, after all) and made by a handful of manufacturers (mostly AT&T and leased).

Remember also, that phone networks between, say, AT&T and GTE were often acoustically coupled at the interface. I remember that during the 70s, if you were calling San Jose from Los Gatos, you felt fortunate to get 300 baud without a ton of noise.
O

It is kind of surprising that there is no answer mode because I have seen a video on Youtube of a Livermore modem from the 60's (one of the wooden box ones), and it made a tone when it was turned on and acting in originate mode. I guess that a carrier detect circuit was not present in early modems. As for other acoustic modems that I have seen they probably have an answer mode since they are newer and people would have been more likely to use/need it.

I am guessing that my modem is from the early to mid 70's based on the look of the circuit board. I did not think to check the date codes on the chips to confirm that though, but I can do that tonight.

What was the purpose of acoustically coupling the two networks together? I know that the phone companies were extremely protective of their lines at that time, but it seems like they would sign an agreement or something so they could directly connect them. The more I read about the history of the telephone system the more it fascinates me.
O

Here are the photos: 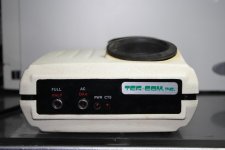 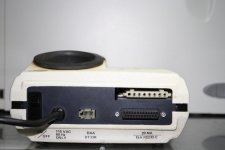 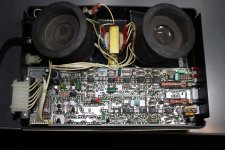 The date code on the ICs is 7741, so I am guessing that the modem was made around 77, unless I read the code wrong.

Looks about right for 1977. Nice that it's also got current loop, which means that it can drive a teletype without the use of an EIA RS232-to-Current loop converter (Teletypes until about the Model 40 are basically current-loop machines in their native state).

Remember that AT&T and GTE were pretty much the only telcos servicing the US in the urban market. And they charged for everything. Want Touch-tone dialing instead of rotary? That'll cost you--every single month. How about a Princess phone instead of the basic 500 series desk set? That'll cost you--every single month. On the other hand, you could get basic "Lifeline" service for about $3/month--and that included the phone. So the network was guarded jealously and built to last decades--as were the telephone sets. Nobody bought them--they just leased them. And the really cleaned up from business customers. Hardly anyone even remembers KSUs and the like anymore.

For some time during the 70s, Ma Bell got very touchy about people using their modems on standard voice lines--sometimes threatening to disconnect your service if you didn't order a "data" line. It's been more or less a continuous war against Ma Bell and her descendents ever since.
O

Thanks for all of the info it has been really helpful and cool.

As for the current loop, I unfortunately do not have a teletype yet , but luckily my terminal has one as well as RS-232, so I might give that option a try. When I make a successful connection with it I will be sure to let you guys know.

I didn't even think of that. My plan was to see if a friend could use one of my more modern modems, and I use the coupler. Would a mid-90's Supra modem work? I also have an Hayes 8-bit ISA modem in a Compaq, and a mid-90's modem in my AT.

I think that you can configure most of the more advanced 90s modems to do just that. I know that I could restrict the answer tones on my USR Courier modems.
O

Telus still operates a dial-up system which seems to not mind running at 300 baud. Of course it assumes you switch to PPP mode or similar after you login.
O

Thanks for pointing that out. Their website indicates that their dial up is only available in British Columbia and Alberta. I am nowhere near near there.

Also, does anybody know where I can find the specifications for the Bell 103 standard? I have been searching for it, but all I get are Wikipedia articles and other encyclopedia stuff that have no info at all.
Last edited: Jan 24, 2013
O