Anyone hear of a Zeus 80 computer?

I was able to acquire a Zeus 80 computer. If I was to describe it in one word, I would use the word "heavy!". It's an all-in-one S-100 based computer with integral 12" monitor and dual 8" drives with a S-100 four or five slot S-100 card cage. I just got it so I'll blow some dust out of it before I take pictures and try it but it's a beast. And it's Canadian which probably explains why nobody has heard of it.

Here's a pic from the brochure: 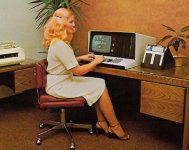 I have the PDF brochure and documentation at http://vintagecomputer.ca/zeus-80-computer/

I guess this didn't get too far out of Toronto or was this a rebranded computer of another brand?

Any info is much appreciated.

I've never heard of it - and I'm Canadian and have been researching computer history for decades.

Where do you find these relics, snuci? As I recall, you also have a super-rare IMSAI PCS 80.
M

Oh wait, is this it here?

(As a fellow Canadian, I'm sure you'll appreciate that I'm typing this on a Canadian-made IBM 3278 keyboard :D)

That is the one. Picked it up yesterday with a couple of other items. I am going to go over it with a fine toothed comb on the weekend and try to power her up. I does have lots of software.

I consider it a pretty cool find because it's Canadian. I am trying to find Canadian built computers specifically so I couldn't pass this one up. So far, I only have a Dynalogic Hyperion but I'd love to find some early equipment like an MCM/70 or anything else that was made here. Hopefully something lighter next time The brochure says 55 lbs. That is most definitely an understatement.
M

I'm still looking for an early Burroughs ICON - made in Canada, specifically for the Ontario Ministry of Education:

Volker Craig terminals are made in Canada. IBM had a branch in Toronto, where they made all the beam spring and Displaywriter keyboards, possibly entire terminals. I vaguely recall a huge early green-screen wordprocessor also made in Canada.

Hrmm.. I thought I had posted a reply but I must have not saved it.

Mr.Amiga 500, I am particularly fond of Canadian equipment as well. I'd love to find an ICON although I'm not sure if I've seen one in person. I do remember the Telidon system that I played with in school but I don't remember the computer that it was on. It was probably an ICON. That was awesome and was one of the things that influenced me in moving to the computer field.

At Seneca College, we used Volker Craig terminals but they were little used next to the DEC VT-320 terminals next to them. I also worked in IBM manufacturing at Don Mills and Eglington one summer assembling mainframe communication hubs of some sort. That location was later Celestica.

My dream machine would be to find an older MCM/70 computer. Other than the Zeus 80, the only other Canadian computer I have is the Dynalogic Hyperion. That is a pretty slick machine too.

In other news, I have been able to get the Zeus 80 fully operational after some clean up and redoing the keyboard. If anyone has any documentation on lubricating the Shugart 8" floppy drives, I'd love to see it. It's an interesting computer with an extra large MPU board (about 1.3 - 1.5 times the height of a normal S-100 card). The system came with 100+ 8" floppies to explore as well so that will be fun when I can get back to it.

There are maintenance manuals on the SA-800 drives on bitsavers.

I've looked those over twice and can take them apart but they really don't mention lubrication points (I didn't expect they would). I'm just wondering if anyone has a recent write up on lubricating the drives. Still works great but it is a little noisy.
You must log in or register to reply here.
Share:
Facebook Twitter Reddit Pinterest Tumblr WhatsApp Email Share Link
Top