I've got a /// that won't boot. Symptoms: I flip the switch, and (if cold-booting after it's been off a while), the screen tries to sync - all wavy and such, for about 20 seconds and finally stops as seen in the attached photo. Subsequent boots jump right to the same screen.


I can do a CTRL-Reset about three times with the same result. On the 4th try, it won't even reset.

Here's what I've tried:
* viewed with composite monitor and a IIgs RGB monitor. Same picture, although that IIgs monitor is really sharp!
* has a 256 5v memory card - replaced all 32 PROMS with new ones - no change.
* taken the memory card off and rebooted - no change
* pulled C10 - C13 PROMS from the MoBo with memory card off. Same result.
* tested the pins from the power supply, all have correct voltages.
* removed the keyboard cable from MoBo - same result. 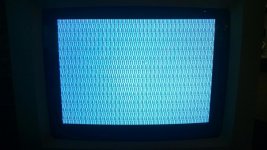 I've mashed all of the chips down with no effect. So before I go much further, just wanted to know what I should try next.

I've looked at the A3 Service Guide, but it seems like it troubleshoots from the machine at least a minimal boot.

Did you lift up the chips before pushing them down?

You checked your voltages but how is it for noise and ripple? You will need an oscilloscope to test this.
C

I've purchased another logic board with somewhat similar results. However, when I take the memory card off, the screen is just all white. Is this normal for a /// booting w/o the memory card installed?. There's a couple of other things it does when I tap on various locations on the board - different patterns or "static-y" screen. But when I lift the board up from the base pan, it seems to improve (back to a white screen). So either the pins on the bottom of the board are shorting on the pan or there's solder traces that are shorting/not making contact.

I'm going to put some thin cardboard down between the logic board and the base pan to see if that helps. The kind you get in dress shirts, etc.
So overall, I think the no boot problem is related to my memory card. I'm also going to remove all the 64x1 memory chips and start reloading them one by one.
C

Ok, I've got the logic board "stabilized" as it, without the memory board, boots to a white screen. After I mount the memory board, it still boots to a white screen. I added my RAM chips to the bottom row - same results. I then added RAM chips to the top row, starting left to right. Same white screen until I get to about the 6th or 7th chip from the right. When I add that chip, the screen shows a "blocked" pattern made of "un-characters" and the screen flashes. As I add more chips the rest of the way across, the patterns change and continue to flash.

So basically, the memory board sockets 2 thru 7 or 8 from the upper right make the screen flash with odd blocks of characters.
I can ctrl-Reset and the screen blanks, then returns to the same pattern.

I've tried different RAM chips in those sockets with no change.