I still feel like a total fool for spending $230 on this, even though it was stated in the auction that the LCD did not work and you could see the original $25 goodwill blue wax crayon pricetag on it, but it arrived yesterday finally.

Short of the documentation and the fiber optic cables for the trackball and keyboard (I am by the way looking for these now) it's a complete 512k system and it's in excellent shape.

Thankfully the display was quickly sorted out. I noticed that the two case screws were stripped and that meant someone had been inside. Opening it up showed immediately that the display connects to the main logic board by means of those annoying laminated copper ribbon cables.

I replaced it with a regular ribbon cable and the LCD sprang back to life and I was able to boot to DOS 2.1 and eventually GEM 1.2. I also cleaned and regreased the Sony floppy drive and scouted out how to further upgrade the unit. There's already sixteen 32K ram chips installed with space for another sixteen which maxes the system easily to a meg. I'm curious as to what the expansion connector on the back is and just how similar it would be to ISA which would open doors to things such as even more memory and possibly a hard drive other than the rare 10mb Rodime drive.
Last edited: Jul 25, 2011
L

Wow, that's a cool computer. I've only seen a few pictures of it in their old ads, never more than just the front of the machine, though. Thanks!
J

If you want the text of the technical manual (no illustrations) and/or schematics, let me know. I'm also quite interested in the contents of those floppies, particularly the GEM ones.
N

The Fiber optics to the keyboard thingy was a bit mad. it was supposed to be a cordless keyboard, which didn't work too well, so they ended up connecting it with cords!
Sadly mine's missing the microphone. There was supposed to be really early voice recognition software for that machine, so if you find some on the floppies, give me a PM please!

I can quite easily generate images of all four floppies which contain all the initially included DOS, GEM, and voice processing applications using rawread. PM me if you want a set. I however am supposedly missing the bundled software (SuperWriter, SuperCalc, SuperPlanner, ACTdiary, ACTsketch, and Activity). Either this system didn't include it because the pouch fits only four disks, it was a fifth loose disk, or there was more than one set of four floppies that you could get with the system. It would be cool to find them as GEM with only a paint and write app isn't all that fun and DOS 2 is a little limiting on what software I can use on the PC emulation.
The full technical manual would be nice. I found the schematics but I need additional information on the expansion connector because in my dreams I'm seeing an 8-bit ISA slot.
Last edited: Jul 25, 2011

Well I have not owned the system for a full month yet and it's already on the "working, but unuseable" shelf. I personally can not troubleshoot what happened to the floppy drive (won't initialize properly) and with no floppy drive I can't do anything with the system which is a bummer as I was getting ready to add in another 512kb of ram and see how it likes a NEC V20.
I have also noticed that some of the plastic components are warped. The keyboard most notably. I did however find a copy of dBase II for the system though.

Sorry for a reply on this old post. Just got two FP with dead LCD, came here with Google. A white FP, what a beautiful system !

Does Somebody had finally disk image of the software ?

Wich type of ribbon do you used to repair the screen ?

I just replaced it with regular grey ribbon cable. Nothing special there.
The disk images should now be available online somewhere...or at least I've put them online a few times.
If you can't find them I can probably temporarily put my set back up.
S

Unfortunately the GEM disks for the Apricot Portable/FP are very much lost and not in the archive of disk images online (though one of the F10 install disks is along with the applications disk). (See: http://actapricot.org/support/apricot_apridisk.html ). Unfortunately none of them have the Portable/FP VDI display drivers.

In that list you'll see the Activity etc. floppy images. You'll need to convert them to normal floppy images using LibDsk (https://www.seasip.info/Unix/LibDsk/) before writing them to floppy.

Unfortunately the owner of the actapricot.org web page has abandoned it so no new software will be uploaded.

I'm in the process of (slowly) collating those disks images into a more coherent set but they are very adhoc and there seem to be no complete sets.

Therefore if anyone has complete sets of images it would be very useful to have them as ZIP files.

With regards to the display, I have looked at replacements. There are some (expensive) 640x200 LCD displays on AliExpress which look like they would fit and the LCD driver circuits *may* be compatible with the output from the FP but the backlight certainly wouldn't be as it requires a far higher voltage. The cold cathode light would have to be replaced with an LCD lighting strip somehow.

[/Unfortunately the GEM disks for the Apricot Portable/FP are very much lost and not in the archive of disk images online (though one of the F10 install disks is along with the applications disk). (See: http://actapricot.org/support/apricot_apridisk.html ).
Click to expand...

That is absolutely untrue. One of the first things I did when I got this machine was dump the floppies, which include GEM. If you search hard enough on this forum I know I attached them to a post but if you REALLY need them, let me get home and I can stuff the four images into a zip file.
That being said, I've never managed to get the ACTivity disks to work. I can write them out but they crash out on what feels like a video mode compatibility issue.

Speaking of disks, The above copy of DBASE II lasted two uses and then the media unstuck from the metal hub. D'oh!
It's been in storage ever since because even if you glue the hub back on you've lost the index timing alignment and that meant ten years ago you couldn't even image it. Now however there's so many raw disk imaging tools out there it's possible to read it as-is, realign the data and write it back out to a new diskette.

I need to do a Youtube video on this before I get beaten to the punch again. Neat machine. I did get the floppy drive working again after a good cleaning and MAN that LCD screen has awful reflection issues.
Last edited: Dec 20, 2021

NeXT said:
Speaking of disks, The above copy of DBASE II lasted two uses and then the media unstuck from the metal hub. D'oh!
It's been in storage ever since because even if you glue the hub back on you've lost the index timing alignment and that meant ten years ago you couldn't even image it. Now however there's so many raw disk imaging tools out there it's possible to read it as-is, realign the data and write it back out to a new diskette.

I need to do a Youtube video on this before I get beaten to the punch again.
Click to expand...

Unfortunately, 3.5" disks are not quite that simple. The metal hub is smaller than the opening in the cookie. If you randomly glue it back in, it will most likely be off center. That throws reading way off. You will need to use some re-applyable adhesive that is strong enough to not come undone while spinning. I have not found the right solution for this. It takes much trial and error to get it "centered" (usually one side touches the cookie) the way it was originally. A flux dumping tool, and graphing the dump with HxC can give you some idea of how far off you are.

Not having to get the zero track simply takes the problem from being impossible to a royal pain in the butt.

How badly do you want DBASE II for Apricot computers?

NeXT said:
That being said, I've never managed to get the ACTivity disks to work. I can write them out but they crash out on what feels like a video mode compatibility issue.
Click to expand...

Yes, those default Activity disks are for the F1/2/10 and don't have the PORTLCD.GSX loaded from ASSIGN.SYS. I'm just making up a set of bootable disks (Activity + Tutorial, Activity+Diary+Async and possibly SuperWrite/SuperCalc soon) now that I have the FP fully operational and an external Gotek connected. GSX is awful as there's no autodetection of the system so the first driver in ASSIGN.SYS gets loaded.

The set of GEM floppy images for the FP would be very much appreciated.
S

Here are the first two disk images (along with FlashFloppy config and image config files). These are 720K floppy images. http://www.lingula.org.uk/~steve/share/Apricot/FP-Activity.zip

If you need a board to convert between the Apricot 26 pin cable and the standard Shugart 34 pin then I have a board here: https://github.com/stephen-usher/Apricot-Floppy-Converter

Note: To convert cables fit header pins for the 26 pin socket on the underside of the board. If I did this again I'd route the "Head Load" signal to the Shugart "Motor On" so newer drives don't keep spinning and wearing out the floppies.

Note 2: On the same Github site I have an F1/F2/F10 RAM upgrade and a board to slow down the floppy controller so that it can be used with later 300RPM drives.
S

Oh, I can't edit my post. The pins on my converter board need to go on the top, not the underneath of the board. (It's originally design to fit in the socket on the F1/F2/F10 motherboard.)

The ACT Apricot Portable had some basic form of speech recognition/control in 1984. Wow.

ACT deserves more kudos for their industrial design work in the early 1980s.

Curious - did you get that mouse/trackball to work? I have one but missing driver/utilities. 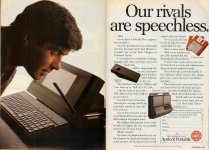 I've got the "mouse" working. The Portable needs a later version of the driver than that for the other F Series. The disk images I shared above have that driver installed. (You can write the images to real floppies using RawWrite on PCs or dd on Linux/macOS. They are standard 720K.)

With respect to the voice recognition, there's a whole chip devoted to it. The driver states that it's a very, very early version of Dragon Naturally Speaking. Although I have a driver I don't have any floppy images with the training software. (I also don't have a microphone.)

Anyway, here's my rather sun tanned machine testing the floppy... 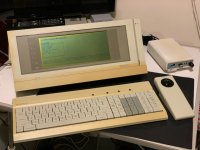