I have several BA23 enclosures with differing cooling assemblies and power supplies.
I'm not sure everything is still as it once was when it was sold.

Where/when and in what combinations were the following cooling options used:

What are the differences between the three PSU versions (besides the known 12 V 6A/7A)?

The front fan baffle/cowling accomplishes that most of the front fan cooling effect is concentrated on the PSU and card cage; the cooling of the two drive bays at the front of the BA23 will get worse because of that.

A fully loaded card cage with power consuming modules might be a reason to use the baffle.

Using an RD53 and a TK50 in the front drive bays might require more intensive cooling directed to the bays by not employing the baffle.

Quotes on the baffle:

Page 3-24:
"On some systems, remove the fan baffle and baffle holder from the front fan."

Page 8-32:
"Remove the fan cowling and cowling holder (if present)."

Quotes on the PSU versions and fan voltage settings:

"The power supply has also two +10 Vdc at 0.45 A fan outputs for the front and rear dc fans. You can increase the fan voltages to 12 Vdc by changing a power supply jumper. However, the KA630 CPU module's thermal and acoustical specifications are based on the +10 volt setting."

I don't have answers to your in-depth questions about these variations of the BA23. I was unaware of a variable speed fan version.

However I too am interested in the print set of the H7864 should you locate one.


I will be watching this thread with great interest.
L

I too would very much like a print set for H7864! These all seem to have been made by Astec. 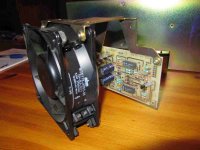 It is attached (via a bracket) to the rear fan and can thus meter the temperature of the air passing by.

I assume that it was meant to reduce the noise level, not the energy consumption (saving energy wasn't that important back then).
I don't know (yet) whether all fans support being speed controlled; on the ones I have at hand at the moment it says: operating voltage range 5.5 to 14 volts.

The jumper for the reduced fan voltage is hidden inside the H7864. You have to remove the PSU from the BA23 to access it. 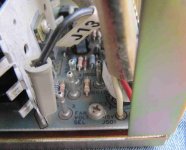 With the H7864-B it is placed where the front fan protrudes into the PSU, see: 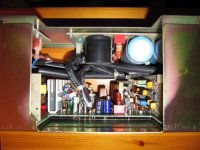 I think at least all BA23s/H7864s from the start of the MicroVAX II have this jumper; I don't know about earlier ones (probably the H7864 version without suffix; mine are -A or -B).

By having a closer look I found out that:

The Edited Modules and Options List '91 specifies the H7864-B as: "THERM PROT" which sounds like "thermal protection/protected".
I don't know whether that refers to the fan speed control or an extra (unknown) feature of the PSU itself.

With both H7864 and H7864-A the cable for the rear fan is part of the PSU, the front fan is connected with an extra cable plugged into the PSU front.
Most H7864-A front fans seem to have the baffle attached.

This is the sticker telling how to configure the fan supply voltage for use with the fan speed control:

The blurredness is NOT the photo, the sticker quality is that bad!