Hi all,
I have a chiclet 2001 with a fully working romset - except for the char ROM. I order to prevent the old chips as far as possible I planned to replace them with EPROM, as I did for the RAM set.
No need for a new idea: on the D'Asaro's web page you can find his clever and sleek solution, very compact. The only con is that it's a little tricky and it was released for PCBexpress, that doesn't allow to export the Gerber files.

Since D'Asaro released it as an open project, I saw no problems to make an easier version and release the gerber for anybody who need it.

After built my own PCBs and test them, I released the gerber files on PCBway shared projects. Use PCBway if you like it, or get the Gerber zip file there and use any other service,like jlcpcb.com or whatever. I also attached the Gerber files here.

Here's the link to PCBway: https://www.pcbway.com/project/shar...540_ROMs_PET_2001_early_version_ee077568.html
It's still in revision while I'm writing, so it could take some time to be available. 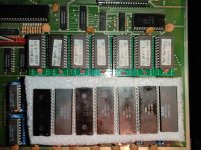 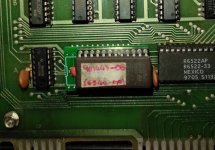 it works as character ROM replacement too 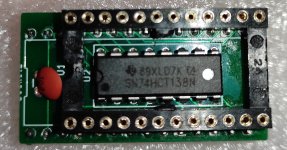 the prototype. The final version is a little bit narrow to perfectly and has a better silk text

The thing I like about the D'Asaro adapters is that he used thin pins on the adapter so that it does not damage the IC sockets. Most IC pins, across their flat faces are only about 0.28 to 0.3mm thick. Whereas many IC common adapter pins are closer to 0.5mm and some thicker. Also some of the Commodore IC sockets were not wonderful being "single wipe" types and they are really easily de-tensioned by putting a thicker pin in them, then later they will not connect to a standard IC properly and they are stuck with the adapter.
N

Likewise I use edge pins on my adapters rather than using turned pins... https://www.tindie.com/products/nivagswedna/replacement-pet-rom-6540-pre-programmed/