I've had a DECSystem 5000/240 for a while and recently decided to check it out. I cleaned it up and tested the PSU offline and it appears OK. I connected the PSU to the system board via the large ground and +5V cables only and no issues, PSU fans turn and some LED's are active. I switched it off and then connected the 12V connector to the system board and after powering back on I got a little flash from by the 12V connector and no fans or LED's. Quickly powered it off and checked around the area by the 12V connector and low and behold I had a short circuit surface mount diode, I photographed and removed it (photos to follow). Oddly when I now plug the 12V connector in I get output on my VT terminal and the self test apart from NVRAM battery all pass. It has 64MB RAM and 1MB NVRAM. The DECSystem has no Turbochannel graphics unlike the DECStation. I plugged an expansion box into the SCSI port and the devices are seen but this expansion box was from a VAX/MicroVAX so I'll have to add a HDD. I have a DEC RRD CD-ROM for the expansion box. I've looked on this forum and Google for Ultrix images to burn to CD (if they existed, tape seems common but I suspect that may be for the MicroVAX Ultrix??) but none of the links or .img downloads seem to work. Does anyone have any pointers to working downloadable images? TIA.
Last edited: Jun 24, 2022
B

Edit: I think I have an original Ultrix CDROM from the software products distribution, but that would take longer to fish out. No idea on the version.
Last edited: Jun 25, 2022
P

I've been given an image to trey from a DEC enthusiast in the UK to try (Thanks Rob). I'll give that a try next week. Here are some photographs of the shorted diode in case anyone else has a dead DECStation/DECSystem 5000. I intend to replace the diode. 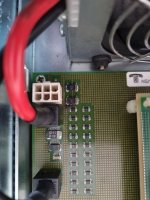 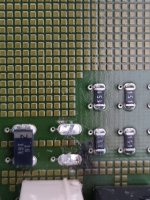 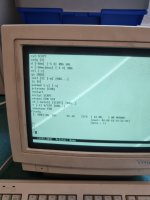 Thanks Bitly for the offer, think i have the 4.5 img now.

That is not a diode. It is a 10uF 16V tantalum capacitor. They are prone to short circuit ( and burst into flames )
P

Thanks MattisLind for the information.
P

I have been struggling to burn the Ultrix images to CD-R but after a lot of trial and error and testing I've managed to burn both a 4.3 and a 4.5 iso. I used UltraISO but had to throttle back the write speed of my writer from 24x to 4x. I can now boot both the 4.3 CD and 4.5 CD but after displaying the Ultrixboot banner and then starting at 0x0003000 the DECSystem reboots back to the >>> prompt. So I still have some troubleshooting to complete but at least it is a start. It may be that have and RZ29b installed in the expansion and box this is 4.0GB so I'm going to look for a smaller SCSI HDD to see if that is causing the issue.

Early DEC CD-ROM drives don't really like modern CD-R media. I had to swap the drive in my VAXStation out for a later SCSI CD drive before it would recognize the OpenVMS media I'd burned.
P

commodorejohn said:
Early DEC CD-ROM drives don't really like modern CD-R media. I had to swap the drive in my VAXStation out for a later SCSI CD drive before it would recognize the OpenVMS media I'd burned.
Click to expand...

Thanks, I'll dig a more modern SCSI CD-ROM out and give that a try. I've tried a couple of RRD42 already.

If you are struggling for a suitable drive, I think I have a SCSI DVD you can borrow.
P

Thanks g4ugm for the offer but I think I've made good progress. I dug out an NEC SCSI CD-ROM drive and while looking in the box I found a DEC RRD43, I've previously only tried known good working RRD42 drives from my VAXstations's.
I connected up the NEC drive and attempted to boot (boot 3/rz4/vmunix) LED on CD-ROM drive flashes and then nothing on terminal. I thought I'd try the RRD43 anyway, connected it up and using the previous command the DECsystem now boots and asks me if I want to 1> Basic Install, 2> Advanced Install, 3> System Utilities (or similar) I selected basic install and picked RZ0 ( RZ29 4.3GB HDD) and install fails after a while with unable to create partition g for /usr. I tried booting again with advanced install this time but after entering the requested info I get failed to create partition g /usr. I swapped out the RZ29 for an RZ28 2.0GB HDD and ran basic install this time it completed the installation.

System now boots from RZ0 (RZ29 2.0GB HDD) into Ultrix 4.5, see attached photographs. My plan is to replace the HDD with a SCSI2SD card moving forward. I suspect that 4GB HDD is not supported but I many try again with either OSF/1 or NetBSD if I can source the images.

The DECsystem doesn't have a graphics card unlike the DECstation, but I think may leave i t like this unless I come across a cheap supported TURBOchannel graphics card.

So what I've learned,

Interested in your efforts to get OSF working. There are kits to build tapes around but I've never gotten it working. The kernel boots but craps out so far through. It's been a while since I looked at it so I forget the exact message.

There is no SIMH MIPS simulator. There's a chap on Twitter who got OSF/1 working on GXemul though. Something else I've not had much luck with!
P

Hi ethump, glad to here another DEC MIPS machine is working. That's three I know of in north of England. I haven't looked at OSF yet.
E

If memory serves, cm_validate checks kernel mods to insure they are compatible before loading. Do you have any unusual hardware attached? Maybe strip the chassis down to the minimum and see if it will boot then.

It's a bare-bones single motherboard system. Everything is part of the mobo (SCSI, network etc). The only things I have to add are the storage peripherals. There's no frame buffer, serial console only.