I hope to see owners of the QX-10 & QX-16 join this group and share knowledge.
V

I found your forum when looking for information about the QX-11. I actually owned a QX-11 when I was young (about 15).

One of the incompatibilities with the IBM-PC was the video output. By default the QX-11 came with a 640x400 / 320x200 video resolution. The monitor was a green phosphor monitor that show really crisp video. As a matter of fact, the QX-11 was able to display 80 text columns, which was not the normal back in the day.

In order to run some MS-DOS programs, specially those programs that use IBM-PC native video modes (or graphics) you have to add a CRT card. The CRT card would emulate the IBM video (but still using a 640x400 video resolution). I saw with my own eyes a QX-11 connected to a color CGA monitor, so I know it was possible to create a video cable that will connect your video output to a regular CGA monitor.

I found the QX-16 technical documentation manual outside this forum, but probably you guys already got a hold of it. But by reading the manual I am convinced that the QX-16 was EPSON's attempt to create a hybrid machine, some kind of QX-10 + QX-11 in one body.

The QX-16 comes with a proprietary video card (based on the NEC 7220 video chip) and it also have a CRT card to display "IBM" video (just alike the QX11). The QX-10 comes with the Valdocs system, I remember my QX-11 didn't come with Valdocs but it actually came with an EPSON "Valdocs" keyboard.

I don't remember if I had to plug my monitor to power or if the power was provided by the PC. It is interesting though that your EPSON Monitor do not have the QX-11 (Q601A) as a compatible machine, so I wonder if the QX-11 and the QX-16 share the monitor.

Based on how close the QX-10, QX-11 and the QX-16 were released, I have no doubt in my mind that EPSON used the same design for all three. I think all three QX-1x will share the same power supply, same video circuit, same keyboard interface, etc

I'm attaching a picture I found in facebook of someone that had a QX-11. I actually did try to reach out to this user to see if he still have it but I haven't been able to get a hold of him...

I'm from Venezuela (a country in south america) but living here in the US. I actually contacted EPSON in my country to see if they have more documentation or an actual QX-11 in storage. If I heard anything from them I will share it here.

Please let me know if I can help with the restoration of this QX-16 .... BTW, if you can dump the ROM for QX-16 somewhere that will be great. If you don't have an EPROM programmer I can actually borrow you mine .... 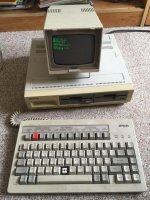 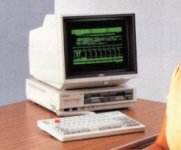 Thank you the information on the QX-11. It doesn't seem to be just an updated QX-10 with a 8088 card as I've seen reported elsewhere. The QX-11 sounds like a very different computer in many ways. The QX-16 (and 10) have simple ROM's and both DOS and CP/M are on 5.25" diskettes and boot each time you turn the computer on. Other wise all you get is a message telling you to load an OS. The monitors in your photos don't match the QX-10 monitor that I'm using on my QX-16. Even the keyboard appears to be different.
V

Yes... the QX-11 was a standalone system, not a card. But as I mentioned before the QX-11 seems to have the very same video system than the QX-10 and QX-16... the QX-11 also have a "CRT" card to emulate IBM Video. I'll bet you those two 3.5 disk drives use the same FDD controller as the QX-10 with different geometry compared to a IBM DOS formatted disk, as a matter of fact that was part of the problem to install software in those QX-11, it was really hard to format those diskettes...

I just found an article that says that the QX-11 and the QX-16 could use the same monitor. The monitor still uses the DIN cable connector but it have an independent power supply/power cord. My options are limited, but if I'm able to get a hold of a QX-11 It will be great if we can compare it with your QX-16 ...
You must log in or register to reply here.
Share:
Facebook Twitter Reddit Pinterest Tumblr WhatsApp Email Share Link
Top