Getting started with a minimal pdp-11/53

I have just received my first ever PDP-11 and as a complete PDP newbie I'd really appreciate some clues.

Additionally the seller threw in M8043 - 4 line async. This is not fitted.

It has an RX-50 drive, console and printer ports and nothing else.

I have started it and worked through to the initial prompt. I've used "MAP" to see that it has 1.5mb of RAM and it is trying to boot off the RX-50.

I have two questions (so far )... Can anyone point me to a floppy disk image that I can use to get it to boot into something?
Secondly. In its current state, i.e. no hard disk controller, what can I run on it?
Thirdly (I knew two questions wouldn't last). Is there an easy way to put any kind of common hard disk or flash card onto this.

I only picked this up because I'd read a little here and thought it might be fun but I can already sense my getting hooked.

Maybe the quickest way to get a disk based setup going would be to find a working ST-225 to use as an RD31 with the M7555 RQDX3 you have.

You will also need the XXDP utilities, and you can run a tu58 emulator on a PC and attach to you second serial port (called a SLU -serial line unit) in dec-speak.
C

Don's site for the emulator is here:

I'll take a look at those.

It's all still very new at the moment. I'm using an old PC as a terminal and so using it for a TU58 emulator seems to fit right it.

Until I've got a hard disk, what are my OS options?

I think for a floppy-based system, rt11 is the only option.

The M7555 is a hard and floppy disk controller. You can use an ST506/412 interface MFM hard disk. The most reliable is likely a ST-225 if you can find one or have one around.

This is a very, very nice system to start out with. With what you have, once you have a hard disk, you will be able to use the ethernet adapter. I do suggest that you start with RT-11 as has been suggested above.

What enclosure is this system in? If you can upload a picture, it would help us. If it's a BA23 enclosure (we'll know when we see it), you'll need only two common MFM hard disk cables to get your hard disk going.

I've included a couple of photos. you can see that the standard chassis has been housed in another cab with room for drives. It also seems to have been bashed around a bit. However, it is still working. 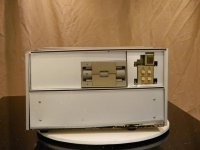 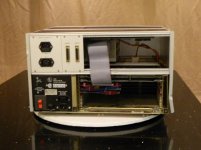 Well, that's not what I expected for an enclosure. Where does the 50 pin ribbon cable go to in the upper chassis? It would be good if it goes to a signal distribution board with sockets for the MFM hard disk cables.

Well, that's not what I expected for an enclosure. Where does the 50 pin ribbon cable go to in the upper chassis? It would be good if it goes to a signal distribution board with sockets for the MFM hard disk cables.

Hehehe, Me neither. I was given another empty chassis with this but the PSU in it is unknown and I'm sticking with this one for a while as I know it works and it makes sense to limit the unknowns. (Rumsfelds?)

Here's a photo taken looking up at the distribution board fixed under the top of the chassis. 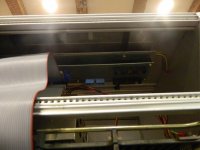 The pair of socket on the front/right are duplicated on the left but are hidden behind the ribbon cable.

I'm currently waiting on another 6-25 way serial cable to sort out the TU-58 emulation.

Can I use the printer port on the casis that is directly connected to the CPU board for the TU-58? If so, what is it likely to be called?


Thanks for all of the help and suggestions, it's appreciated.

That might be the standard BA23 distribution board mounted upside down.

I agree with Glen. This looks very promising! Start looking for an MFM hard disk....

I'm on the look out for a suitable MFM drive as suggested. That would really open the doors.

In the mean time I've sorted out a PC to use as a termainal and also a TU-58 drive. My PDP has 2 serial ports, one is labelled Console the other "printer". Is it possible to get the bootloader to think that my PC connected to the printer port is a TU-58? If so, when I ask it to boot, how do I specify the printer port?

Did you download the manual yet for the M7554?

The baud rate can also be set through whatever you have connected to the 34-pin connector J1. Any jumpers or switches on the external connector panel should just be wired in parallel with the buad rate jumpers on the M7554 board.

The M7554 manual lists DD0 or DD1 as available boot choices for TU58 devices. I have never tried booting from a TU58 device myself on my M7554 CPU. I assume it should just work if you have the device connected to SLU 1 and the baud rate configured the same between the CPU and the device.

Hi All;
ACollins22, ""Is it possible to get the bootloader to think that my PC connected to the printer port is a TU-58? If so, when I ask it to boot, how do I specify the printer port?""
As Long as two thing are set up for what You need..
First, Check that Your PC Printer Port ISN'T a Parallel Port.. And

Second that IF it is Indeed a Serial Port the make Sure that the appropriate Signal lines are there.. RX, TX and Ground..
Most, but not all Pc's have a DB-25 along with one or two Db-9 connectors..

THE DB-25 most of the Time is Parallel Port and You Do Not want to use it..

I have seen Some Old PC's that Enable You to set it up for either Parallel or Serial port, but that IS RARE !!!
The DB-9 are the Serial Port(s)..

If Your PC Does have Only One Serial port and One Parallel Port, then You have a possibility of a couple of choices..
If the PS has USB then You could get a USB to Serial Converter and Use that at for Your PDP Console Port instead of the One Serial port that you have and use the one serial port for the TU58 Emulator..
The other possibility is to get a Parallel port to Serial Port Converter and again use that for the PDP Console port..
But I would Not recommend using either one of these options for the TU58 port from what I have been told by the Experts..
THANK YOU Marty
Last edited: Feb 21, 2014
A

Thanks to gslick, Crawford, Lou - N2MIY and Marty I have now successfully booted my PDP-11/53 from a PC running Don's tu58em into XXDP

For those that follow and are as new to PDPs as me, this is what I did.

I used Win Xp on my rather old laptop and used Hyperterm on COM1 (19200) to act as my terminal to the PDP.
I started a command prompt on Xp and then started tu58em with the options -p5 -s 9600 -r 11xxdp.dsk. This starts tu58em talking on COM5 at 9600 baud with the disk image mounted as read only.

I had COM1 connected to the console port and COM5 to the printer port.

I started the PDP, watched it go thorough its self test and the numbers 1 to 9 and when it started rattling the RX50 I pressed ctrl-C to break the boot. It asked for a command and I used...

Code:
and watched as it started up.

One point I didn't pick up on until I saw it was that it has both DD0 and DD1 are on the same port. I thought they would be on two serial lines (SLU) and they are not

Now I've booted up the PDP I'll sit down with the manuals and boot myself.


Thanks again folks. Much appreciated.

Nice work. It's always a good idea to make notes as you go along. I don't tinker with my systems often enough to remember all of the details so I write down hints to remind myself where I downloaded manuals and binaries, and magic commands and configuration details necessary to make things work.

You probably want to start by running the 11/53 diagnostic OKDDD0.
Then run the Q-Bus memory test VMSAC0.

Good on ya mate!

I would send you one of my spare MFM disks but shipping would be fairly dear, and they may not survive international shipping.

Congratulations Andy! You have made very quick progress!

The machine probably seems slow now, but that is because of the slow serial connection to the TU58. When you have an MFM disk, it will be much faster. Even then, the M7555 and MFM disk will still be slower than what your 11/53 can support. Maximum speed would come from a SCSI adapter (which you don't have yet) and a scsi disk. But, take one step at a time and find that MFM hard disk. There should be plenty on your side of the pond, you just have to put the word out that you are looking for one.