In the recent years there was lot of acitivity on the Apollo guidance computer (AGC), but
also in Europe there where (widely unknown) developments regarding rocket guidance: In 1967 a
general purpose computer (no core rope memory, "only" 8k of core store) designed for the Europa
space launcher entered service: The Elliott 920M (as the AGC) used surface mounted integrated
circuits and implemented the 18 bit architecture known in the UK as the Elliott 900 architecture
which was invented in the early 1960ties.

This 920M computer had several launches from Woomera and Kourou sites in its original
role, but later was used in various other airborne and ground based applications as well,
where it served well into the 2010s (more than 43 years!!). See my YouTube video on the 920M:

I also have got a web page on the various members of the Elliott 900 computers I am
taking care of and on the 920M and I have three different ones up and running:

"Relatives" of the 920M used differnet word widths (like 12 bits or 13 bits) and where
used in many applications (ship's compasses, Boeing 747 auto throttle, control of
traffic lights or industrial machinery) and I know of the autopilot computer of the
Tornado military fighter aircraft which is still in service in Germany, around 60 (!)
years after the architecture was created.

Best wishes and happy vintage computing to all of you,

For those interested in following the activities on the 920M computers and Elliott 900 series in general, you may
check the journal "Resurrection" which is the quarterly publication of the Computer Conservation Society (CCS) in
Great Britain: Latest issue.
Each issue contains a report on the current status of the various 900 machines all over the world. Currently Terry
Froggatt and Andrew Herb are in the process of restoring two more of the 920M computers to working condition.
Last edited: Jun 21, 2021

Excellent work. I cannot even guess the number of hours it took to restore the 920M and its associated support equipment to the level you have achieved. I am somewhat familiar the the Deutsch military connectors and just the task of creating a mating connector must have taken a lot of time. Keep up the good work.
-dave_m
B

Thanks for the compliments - yes, lot of time went into that and the milling was quite funny because it
was the first time for my friend using his machine in that way (we drilled the thin holes with length more
than 10 times diameter under water). But well worth the efforts having such a unique box up and running!
;-)

Currently working on restoring more of my inertial navigation systems from Ferranti. Also gathering
all information possible as long as some of the expert old hands are still around:

Some more pictures for those who do not want or can not view the video:

(1) The two machines right the original 920M with 8k of core memory, on the left hand side
a late 1980s re-make of the same architecture (identical in speed and command set as well
as IO connections) but using 29XX LSI chips and expandable internally to 32k of battery
buffered CMOS memory, the 920ME: 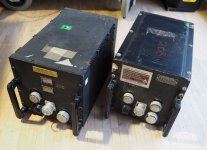 (2) Can you spot the 920M computer in the avionics bay of a SEPECAT Jaguar? All the boxes you see there
are making up the NAVWASS navigation and waepon aiming system - the inertial platform (i.e. the sensor
pack with gyroscopes and accelerometers) is on the top: 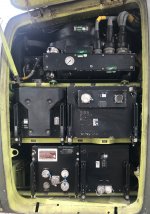 (Strange how technology evolved and and what advanced navigation systems we are carrying in our
pockets nowadays!)

(3) Interfacing the unit is not an easy job (of course one could plug individual pins with cables into the
holes, but that makes switching between machines rather cumbersome) as the plugs are un-obtainable,
but using a milling machine the pins can be glued to custom inserts to implement some plug-like connection: 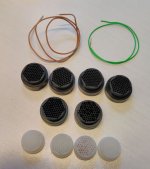 For example the first wires populated for the paper tape reader interface: 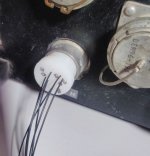 (4) Initially there where lot of failures esp. in the core related modules. One type contains caps which all develop
a short over time; they can be circumvented - but there also have been shorts in chips or not working
gates - here the view on a line driver module with the aluminium shield milled off and the Araldite potting
polished to have a good view inside: 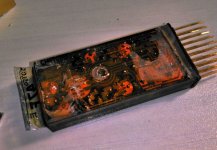 The components are mounted in a 3D way between mylar sheets to have best packing density. Inside are
not only discrete components but also SMD chips in DTL logic similar to those used other space rated
electronics. Components are not soldered, but everything is either welded or wire wrapped. Same is true
for the modules from the logic sections: 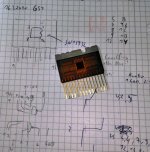 (5) Fault finding worked in measuring and understanding (esp. in case of the core section) but also a
crappy thermal imager (64 pixels with overlay of VIS image) served well, esp. in hunting shorted
modules: 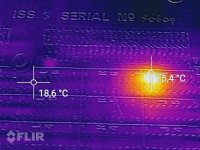 (6) Restoring the machine and building an Arduino based interface for loading software via the
paper tape reader/punch interface and for communicating by implementing the Elliott TTY via
USB where concurrent processes - sometimes the setup looked weired: 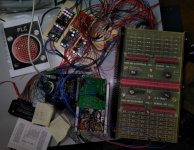 ...to-left the bunch of DC-DC converter can be seen creating the various voltages required by the
old lady. The Arduino setup found a home in an old homing-panel from the mighty Nimrod aircraft.
Although that was not really related to the 920M, it offered the digital dials and displays for selecting
the simulated paper tapes which is quite nice (middle, grey box): 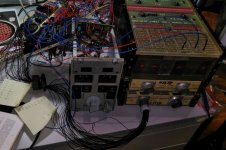 (7) Meanwhile the setup works nicely and is clean and tidy with the panel/interface controlling
both variants (M and ME) without big efforts: 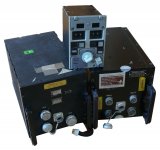