So I spent the past 8 or so hours figuring out how to get a 4865 drive working with my XT. It turned out to be pretty easy once you know how, so I figured I'd write a little guide, may save someone else a lot of trouble.

The first thing to figure out was how to power the thing. It doesn't have its own power supply but it has a weird 4-pole connector. I have nothing to plug it in to though but it was pretty clear that that's where the power was supposed to come from. So I took the whole thing apart and started measuring and found out which pins where 12V, 5V and ground. Next I searched my entire basement for something I could plug this connector into, but to no avail.
Opened up the large connector to see what things looked like in there, and it turned out the drive will take power from through the DB37 connector as well. One problem, my controller (the original XT one) doesn't give it any. I have a couple of spare controllers so I figure I could offer one up for experimenting. What I wanted to do is steal the +12V/+5V power from the ISA connector. So I soldered 2 wires and lo and behold, the controller still worked with the internal drive.
I had a lot of trouble getting the external drive to read/write anything though, it would light up shortly and then give me a read error. But the diagnostics disk recognized it as an external 3.5'' drive and could also format a floppy. Long story short, I had changed the switches on the mainboard to 3 floppydrives, which made the new drive C: and this conflicted a bit with my PATH settings
The finishing touch was some config.sys wizardry and now the drive is working and made file transfer between my main machine and the XT a whole lot easier. Plus the 4865 is just cool :mrgreen:

Anyway, that was the long version. Here's the short version. 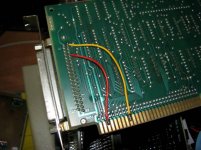 2) Leave the mainboard switches for number of floppydrives alone. You need to load driver.sys anyway to let DOS know it's a 720k and not a 360k drive and apparently it doesn't care about the switches. This saves you from having drive letters allocated to non-existing or unusable (720k that thinks its a 360k) drives.

3) Add driver.sys to your config.sys. My line looks like this with driver.sys copied to the root directory:
DEVICE=DRIVER.SYS /D:2 /F:2
That is drive 2 (first external), format 2 (720k).


That's all there is to it. Obviously I wouldn't be myself if I didn't have a question too.. I'm wondering if it's possible to have DOS use B: for the external drive instead of D? Without building adapter cables and what not, that is

You didn't say what version of DOS you're using. Under DOS 5.0 and earlier, you can use the command:

For DOS 6.0 and later, take at look at the SUBST command; not as neat as ASSIGN, but can be used for this purpose.
S

Edit: Out of curiosity, did the 4865 originally come with an external PSU or what is this 4-pin connector supposed to plug in to? I imagined it may have come with some kind of molex adapter or something? I only had the drive and nothing more. Can't find much on google about this thing other than that it was used to use 5140 floppys on PC/XT/ATs.

In case anyone needs it, here's the pins.

The 4865 was an odd bird, intended for the users of the 5140 convertible who wanted to shuttle media between their 5150/5160 (there was a different external drive for the 5170). Since the 5140 was such a poor seller, you don't see many of these around. To the best of my recollection, it could be powered from an external power pack or an ISA "bracket" card that included a molex header for power. Some third-party add-in cards (Sysgen Omnibridge, Micro Solutions Compaticard) had jumpers that could be enabled to power external drives also.

The scenario was repeated with the PS/2 models and the 4869 external 5.25" drive. This time, however, the power supply was incorporated into the drive box itself.
Q

Sweet, thanks for posting this!

I've got a floppy to usb emulator I'd like to eventually try in my xt box (one of these http://www.floppytousb.com/?gclid=CMy48L_koasCFRM6gwodYXRSnQ though there are several competitors.) Your post hopefully will speed my way when the time comes!


Out of curiosity, did you build the cable, is it a common cable with another name or use, or did you just happen to have one already? I've found a 37 pin on both ends, but not the "perfect" 37 d-sub to internal. (imagine that! )