Hi, I've been following and contributing to the below thread on here under "other", as the HP 1000 A900 is a mini computer I though I would move the discussion over to here.

I acquired an A900 a few months ago after working on the A400 and the 1000 L class many years ago. It was a bit of a learning curve for me and I'm enjoying the challenge. Apart from the original system I've since purchased a few more boards and sold a couple that I would never use. My A900 is still not running as I'm in need of a cable to connect the mux PCB to the breakout board or an async cable to connect my async card to a terminal so that I can get to VCP and then the next challenge with be installing RTE-A on either a HP-IB disk or on a PC with a HP-IB card and the disk emulation that is available.

Is there anyone out there in the UK or further afield with a working HP 1000? Be interesting to know other peoples thoughts.
P 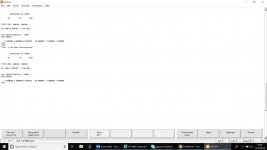 I have the mux cable and breakout board, I can now get a VCP prompt but my A900 shows as having 0MB memory. I had a spare memory controller an 3/4MB card, I get the same error with these installed. So either one of the other cards is faulty or both my memory cards and controllers are faulty. It also fails the memory test.

Well, finally some progress. Thanks to Roland from Switzerland who supplied me with a set of PCB's I now have a working HP1000 A900, oddly though after passing all my now spare cards through the working system I only found one 3/4 MB to be faulty (compatibility issue?). I now get to the VCP> prompt after each power on and it also displays the correct memory size and I/O board population. The extended (%M) test now completes without error also.
Next step is to get a PCI HP-IB card for a PC so that I can have a go at the HPDrive project.
You must log in or register to reply here.
Share:
Facebook Twitter Reddit Pinterest Tumblr WhatsApp Email Share Link
Top