I just finished fixing a dead 5152 dot matrix printer (it had a dead on-off rocker switch of all things).

In the process, I noticed something interesting.
The IBM 5152 was manufactured by Epson and is the equivalent of their MX-80.

Inside the printer, on the control board are sockets for three 2716/2332 ICs. 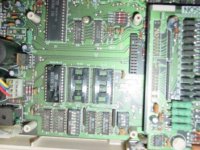 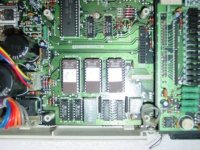 The Sam's Computerfacts for the 5152 shows only one IC.

Any idea why this 5152 would have three of them?

Check the dates on the other ICs.

I suspect that the 2232 is the newer design. Someone at Epson probably figured out how to cram the firmware into 4KB, instead of using 6KB worth of ROMs. Given that the 2232 is a mask-programmed ROM, as opposed to a UVEPROM (2716), it probably saved a fair amount of money on the BOM.

It's not uncommon for early versions of a product to have EPROMs and later ones to have mask ROMs. In quantity, the masked ROM is considerably cheaper--but the software has to be stable because the setup costs for ROMs make large quantities (10K parts or more) mandatory.
L

Yep, that must be it.
The serial numbers on the printers indicate the same thing.
The 5152 with the 3 ICs is real old (ie: low S/N) - it's even got an extra hole in the side near the paper roll knob, like the Epson MX-80 case has.
The later 5152s don't have that, so IBM must have had them make a few other changes along the way.

Epson must have had a ton of the control boards made because they all seem to have the same three sockets. They could have saved a little money there too, if the other two sockets were no longer needed.

Hate to bump an old thread, but the pictures are relevant.

I have been doing some research on the Epson MX-80 printers, and it seems the original default configuration did not include "graftrax". Graphtrax is apparently required for MX-80 printers to print graphics instead of just text.

MX-80 printers without graphtrax, would only have the single 2332 ROM. Epson and other vendors sold Graphtax as an upgrade kit consisting of three 2k byte (2716) eproms. Some OEMs included graphtrax as standard equipment, and it looks like Epson also shipped some configurations with graphtrax pre-installed. Probably later in its life this became standard. Still, from Epson this was originally an option.

It seems OEMs may have customized graphtax for their own printers. The above document mentions special TRS-80 characters.

I would have thought that IBM would have shipped all of its rebadged MX-80s with with Graftrax, but perhaps not? It looks like others such as the TI-99/4 impact printer came with that as standard because graphics capability is described in the TI printer manual. Or perhaps they did ship a single-rom version with the required IBM graphics functionality crammed in there?

Does anyone know if there are any specific external marking differences on MX-80s that shipped with graftrax? (Obviously there would not be for manually upgraded printers).

Anyway, it would be good to get the IBM 5152 roms dumped and archived, and perhaps put on Modem7's site.

IIRC, the IBM-branded printers have the entire upper ASCII character set in ROM, while the generic Epson printers do not.

So the whole reason I was researching this, I grabbed a nice generic Epson MX-80 off of eBeh to play with.

As I suspected, it did not come with the Graphtrax roms. Like the one above, it only came with a single 2332 ROM. When I tried to send it a graphical test page (using Windows 95), it only printed garbage text and spat out paper. Interestingly, the built-in self test included a set of generic block-graphic characters.

So I cut the J1 wire as described in the Radio Shack upgrade notes, and plopped in a set of ROMs salvaged from a TI-99/4 Impact printer (that had let out too much of that magic smoke) ages ago, and surprisingly it worked!

Well, now that it had the brains of a TI-99/4 Impact printer, it was interpreting the DIP switches much differently, and it is not at all similar to what is described in the guide above. Apparently this version of the Graftrax ROMs has settings for various international characters. Well, once I dug out my TI printer manual and set the dip switches as per its listed defaults, it behaved normally and I was able to print text and a graphics test page.

I'm having some problems trying to dump the 2332 ROM. Apparently it has a couple of pins that are different from a 2732. My programmer only sees half of the data.

Wow, I forgot how hot those print heads could get! Now I seem to recall that may have been what did in the old TI printer. I seem to recall dissecting the print head on that thing and the coil for pin 9 was melted (too much underlining!) and it must have shorted, eventually damaging the driver board.