markgm said:
I won't be uploading it to Thingiverse at this time (I have a side hobby business selling prints of the designs I create), but I am happy to provide the file to anyone who wants it for personal use.
Click to expand...

This is fantastic! I'm in the UK and wondering whether you'd still be willing to send the CAD file so I can print for my personal P70 which has two broken hinges? Thank you.

I need to find an extra spring as one was missing when I bought the P70.

Also, look at that, nearly a year since your post. What a coincidence!

How was the hinge you 3D printed been holding up?

hi i'm new to this ibm, it works fine, but you need to replace the hinges and floppy drive. I live in Spain and here it is impossible to get parts, I have manufactured the cable to adapt a gotek, but it does not work, it tries to read the track and then it stops. If someone has any experience to help me please, I will continue to share my progress. I apologize for the translation that I have done with google teanslator
H

Any chance you would be able to send me a copy of the files? I've recently picked up a P70 (of course with broken hinges) and would very much like to print new ones in CFRP. Thanks!

I don't think @markgm makes the P70 hinge files available publicly, however I have purchased replacement hinges from him and used them with success. Maybe some day we'll see an open source release of the files.

markgm said:
It printed well, though I made a few tweaks to it to eliminate the need for the majority of the part to have supports. I also tweaked it to make one of the two hinges a hair thicker since there is room for it. The original part has a few cutouts reduce weight and these aren't needed with a 3D printed part since it's possible to make the inside hollow. Not that weight is terribly important here; no one is carrying one of these around the airport! That said, the 3D printed part weighs less.

I won't be uploading it to Thingiverse at this time (I have a side hobby business selling prints of the designs I create), but I am happy to provide the file to anyone who wants it for personal use.
Click to expand...

I have two P70s both with a broken right hinge and I'd appreciate getting access to the files so I can print them on my own printer, if you're still doing that. Shipping to my location alone via eBay is 24$ so that's not a great option, but I value your effort in creating the models, so I'd be happy to pay for the STLs alone.

As for non-working floppy drives: In all P70s I recently got (I set out to buy one, and came home with three...) the drives were non-functional. The motor was spinning but it was audibly running too fast, and the computer would hang for a long time if a disk was inserted on boot. Slowing the motor down with a finger to get closer to the expected speed would result in some audible head seeks, but it was too unreliable to get any really good reads and the computer continued as if it didn't find a boot disk.
In all three drives, I found the same two capacitors that had leaked terribly, a 4.7uF and 10uF (IIRC) one. Replacing them (and ripping the solder pads off in one case due to the advanced state of corrosion) restored function on all three drives.
I've marked them in this picture (the only one I took), note that the 10uF one is already removed in it: 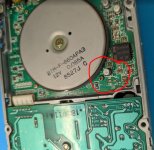 I hope that information might help someone in the future!

I've had the same issues with those drives, the leaking capacitors do a fair bit of damage. Replacing all of the caps brought the drive back to life for me as well. While you have the drive out you might as well replace all of the others, as they will inevitably leak!

Thanks to markgm generously sharing his designs, I was able to get my two P70s fixed.

I printed the hinges on my Prusa MK3S+ using Prusament PLA, and they seem very very sturdy. For those doing this at home: Infill doesn't matter, as the main stress as far as I can tell is at the top of the hinges, where the walls are so thin that they're solid either way. The model only required little supports. For reference, this is the face I lay the piece on (looking at the bottom side), and where I added supports (blue surfaces): 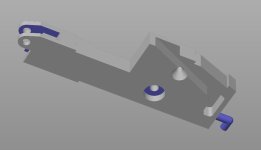 Getting the old hinges disassembled is a pain, as it requires removing the old metal nuts IBM used. I didn't have the tools to drill them out, but managed to eat enough of them away with a dremel cutting disc that they could be pulled out with some force. This was not a museum-quality restoration, as this was the first time that I ever used a dremel... but it worked!
For the center axle, I happened to have some leftover IKEA screws lying around that had a good diameter thread, just thick enough to eat into the plastic a bit, and nice, nearly flush heads. The heads didn't have any slits for a screwdriver, so I screwed them in with pliers (see the bite marks?).
The top nut I replaced with M3x16 screws and M3 washers. M3x10 would likely have worked too, and looked a bit neater, but longer than 16 would cause problems. 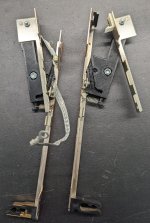 One of the machines also had the retaining latch of the right display hinge snap in half, so the screen would no longer stay closed. Luckily, that was a simple enough part that I could quickly throw together a replacement in TinkerCAD, which I've also shared on Printables. 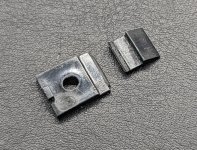 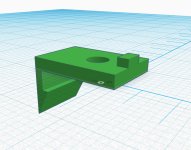 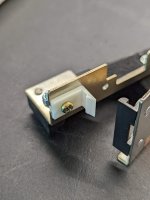 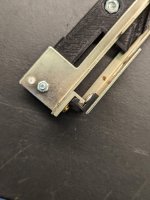 And with that, the screen is back to its full former glory! 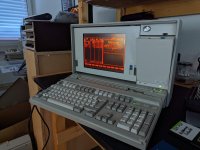 In one of the machines, the display doesn't actually stay fully extended, but slowly slides back to about 40% level. In that one, I only fixed the right hinge as the left one was still intact, and I managed to bend the right metal part a bit. It was the one I worked on first, I became more careful on the other ones.

Again: Thanks a lot for your help and for sharing the hinge files, markgm! I don't think I'd have had the nerves to start making my own models and taking a dremel to the machine if I hadn't had your work to start on. And it turned out to be a fun and rewarding journey!

For future reference, these are the links to the display latch thingy I made: TinkerCAD (raw model), Printables (for 3D printing yourself)