When working on an SLT/286, I found that an import CF adapter would prevent it from booting, to the point it wouldn't even start the memory test.

I took the adapter to the bench and started probing it and comparing against the IDE pinout. I found that pin 28, SPSYNC:CSEL was permanently connected to ground in the adapter. Since CSEL wasn't really a thing when this machine was made, I decided to disconnect it.
Removing pin 28 fixed the issue completely. The CF adapter now works perfectly, the machine boots, and all is good.

Below is the modified adapter: 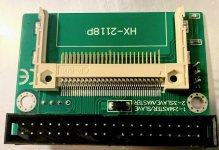