Does anyone know of a low level formatting program for the TRS80's Model 4/III? Trying to see if I can revive an external RS 15MB HDD
L

Frank,
What OS will be involved in the Format? I see these software items for LDOS?

It's completely dependent on the type of HD. There is no concept of low level formatting hard drives in the OS.
C

Hi Larry, It would be TRSDOS 6.2.1 model 4. Bruce, It is an MFM type drive. I guess worst case scenario I could pull the drive connect to a WD MFM HD controller
and using DOS's DEBUG command I could invoke the LL routine in WD ROM. G=c800:5. Have done that before. But many years ago!

A low level format from a PC’s controller wouldn’t help you much if you actually want to use it on a TRS-80, they will not be compatible. (Pretty sure the TRS-80 formats them with 256 byte sectors, among other problems.)

Here’s the manual for the 4/4P disk system. It mentions a “hardgen/bas” program on the OS support disk:

Ok thanks, Eudi I will check it out. I din;t think about the PC vs TRS80 formats like the idiot I am!
N

Chromedome45 said:
Does anyone know of a low level formatting program for the TRS80's Model 4/III? Trying to see if I can revive an external RS 15MB HDD
Click to expand...

Maybe this may help

Will give it a shot. Found out my Model 4 was not talking to the Lo-Tech IDE nor the 15 MB Tandy drive. Opened the trs80 and and replaced U73 a 74LS245 that went bad and that fixed the problem. Now it talks to the Lo Tech IDE. Now to test on the 15MB Tandy external. Will keep advised.

Great if you found bad chip in interface! I was never good at that.

Maybe I can help you shed some light on hard drive problem.

Not sure why you want to do a low level format but it is something that normally is factory only. If for some reason low level format has been damaged it is likely that damage is due to hardware failure since OS cannot read or write format areas. Back in day people would do a low level format and it gave them a warm fuzzy feeling of being a tech but it really didnt solve any problems.

Low level format is a function of your controller, not CPU. Your OS (if supported) simply asks you a million times if you are really really sure then passes this command to controller. CPU is hands off until operation is finished then can read if pass or fail. Many controllers or OS (TRSDOS is one) disables this in case you have a bad patch of code happen to enter driver with parameters to start format.

Driver doesnt format anything or change anything. It simply passes commands and data between drive & OS.

If you have a ST225 or ST506 etc it will format same on IBM as TRS-80. They did not sell drives with different low level formats for different VARs. Yes a few rare companies that would try to make some special settings in format so that if you didnt know their tricks then you had to buy replacements from them. All those companies except one (IBM but we can hope) are gone and should be gone. Markets dont like that approach. Drives have personality information burned in that tells controller how many heads etc. Controller can then format.

Your hard disk installation has 3 basic components. Host adapter, controller, drive/drive electronics. IDE drives are no different they just combined all this together. Your RS 15MB drive has a standard controller that RS had slightly modified. On of the modifications was having RS host adapter built on same board as controller. This was 2 of 3 steps making a IDE drive (again RS at head of pack).

Again to make you think if you dont know where to solder 3 wires or other tricks it wasnt going to work. They sold a lot of service that way but today almost nobody does these things. These 3 wires and active light on front were part of a plan. It made it impossible for many people to plug something else in and it also gave us a nice light on front. Be warned that light serves more than once purpose and will not work without it (make sure bulb is good). I wonder how many $ RS actually took in replacing a burned out bulb (hard down system). Some changes were made later so they worked with our without bulb.

Back in day when we went to 512 sector this is because we added 8 data lines. Today 32b controllers write 1024 byte sectors and have 32 bit data lines. Increase of sector size was done by adding larger half or full words (upgradded from bytes). Yes someone will google and find drives with 512 byte sectors and 8 data lines but read careful and again most of this non standard stuff went away.

When they stopped making 256 byte sector drives there were companies that trashed large machines because they thought they could not get drives that worked. It was simply a matter of connecting data D9-D15 to ground and use drive way it was intended only at half its rated capacity. This can also be done with TRS-80 drives. Again, nothing special about IBM, TRS-80, Compaq etc they were all same with a few exceptions. Trick was all how cable was made to connect drive to an older controller.

If you want best hard disk drivers for TRSDOS use RSHARD5/6 by Misosys. This was written by the man, myth and legend, Roy Soltoff.

Anything he wrote or designed and has Misosys name on it you will be sure is best pick you can pick for your TRS-80. He designed TRSDOS as we know it today so of course he knows how to best write drivers for it.

If you need help with it PM me, it will handle any TRS-80 drives you can throw at it.

Last few years of Misosys Quarterly (available from Tim Mann website for download) covered hard drives in depth. Roy had made a 40MB replacement for TRS-80 so there were many issues talking about drives, drive controllers, TRS-80, TRSDOS and everything in between.

But low level format, I would be hesitate.
C

Thanks for the info. I believe my 15 MB HD is bad. Ran through the Hardgen/bas program and all was looking good. After it was complete I reset the Model 4 and I issued the DEVICE command and got a GAT error. I understanding of that error is similar to a FAT error on a PC. And it also said directory was full even though there were no files on it. So I am looking to get a tested Seagate ST-225 20MB hard drive and see if that will work. I hope it will. Or get a FreHD and be done with it.

Actually no, GAT error can be a good thing.

This tells me several things.

You install drivers or use this Tandy install program?

Then a sysgen? Followed by RESET?

Please let me know and I will help you out.

danielbooneamerica said:
Actually no, GAT error can be a good thing.

This tells me several things.

You install drivers or use this Tandy install program?

Then a sysgen? Followed by RESET?

Please let me know and I will help you out.
Click to expand...

I just read your post again, I don't think it's drive.
C

I used the TRSDOS 6.2 Hard drive setup program. Mainly Hardgen/bas. which does everything for you. But was thinking maybe I should try to do it manually. Which I am familiar with using.
That is how I set up the Lo-Tech-IDE. Which works fine BTW.

Chromedome45 said:
I used the TRSDOS 6.2 Hard drive setup program. Mainly Hardgen/bas. which does everything for you. But was thinking maybe I should try to do it manually. Which I am familiar with using.
That is how I set up the Lo-Tech-IDE. Which works fine BTW.
Click to expand...

If you understand manual install if might be of benefit to download rshard6. Roy wrote it to overcome RS supplied driver shortcomings.


GAT error don't only meant it didn't read sector but it also means it read but did not return a system sector error in A register.


This is often reading a directory sector where one done exist.

Again this has to do with RS way to handling media.


If you did a format and it created directory, it already did a write to GAT.

I don't think it's a failure of media that now it cannot read what it just wrote. When it did write a directory, your controller verified it readable.

Sorry blurry image I don't have the best eyesight. This picture is all the format / Verify errors. 2nd pic I tried to do an HD Check using the LSDOS hdcheck6 program and this is the result. So I think the media is bad. I tried the RS HD drivers and the LSDOS HD drivers both have the same result. Also tried on Model 4 and on 4p. 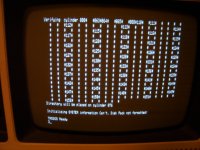 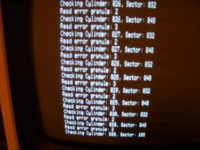 Only other questions I would have is those 3 wires soldered in correct place? If you think someone else already worked on this in past verify everything.

Also is active light 'on' front of drive? Should go off when accessed and 'on' when idle but ready.

Yes it very could well be media. Couple other things, if it is drive, most times it is electronics board mounted on drive and can be swapped.

Also there is a sensor near spindle that generates index pulse. More than once I have had these collect dust and this pulse becomes unreliable. Just make sure it dont have a dust ball jammed in there.
C

The green light is on when it is ready and flashes during disk access. Ok will check spindle. I also reseated all the connectors as well. I think the 3 wires are in the right area. Will check those when I check spindle. Went ahead and bought a Seagate st-225 20MB as a possible replacement.
N

danielbooneamerica said:
Only other questions I would have is those 3 wires soldered in correct place? If you think someone else already worked on this in past verify everything.
Click to expand...

If you look at the video I posted earlier, I show where the 3 wires are connected.
C

Yes I saw that. But that was the larger 8X300 board. I found where they go on the smaller board which I have the WD1000-TB1 and have connected the 3 wires already to it already.
And I did as he did and used a connector so I can seperate the circuit board from the wiring harness on the chassis. It wasn't to hard to locate the solder points.
N

Chromedome45 said:
Yes I saw that. But that was the larger 8X300 board. I found where they go on the smaller board which I have the WD1000-TB1 and have connected the 3 wires already to it already.
And I did as he did and used a connector so I can seperate the circuit board from the wiring harness on the chassis. It wasn't to hard to locate the solder points.
Click to expand...