I've bought an old Mark 8 computer. The man used the original Mark 8 boards but he built his own version.
He made all the boards pluggable. And he added some memory cards and designed a video card for it.
He did not use the LED display but used several 7 segment displays for the read-out. He also made a programming remote.

I think he did a really nice job back in those days.

I haven't tested it because I want to readout the EPROM first. There is only one EPROM
but if this one is distroyed the complete machine will be useless I think.
So I really hope the EPROM still has his program intact. It's a C8702A version :huh: 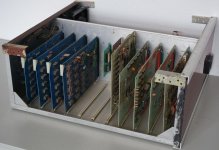 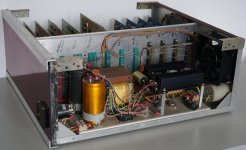 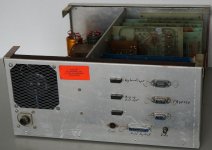 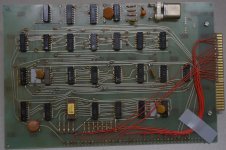 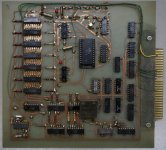 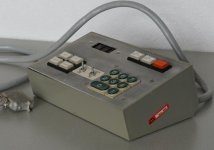 Does anyone have a datasheet of a C8702A EPROM?
I have no idea how to read this thing. Is it electrically the
same as an 1702A?

Thanks in advance for your info!

Hello Roland,
yes it is equal to the 1702A.
I have a reader/programmer for that EPROMs.
Here is a DIY programmer and here some other info.

Thanks for your information! I've got the PCB, CPU and instructions
for the Marting Eberhart programmer. According the website you mentioned,
the programmer from Martin should support the 8702. But Martin told me he doesn't know...

Martin asked me for a datasheet to check it. But I can't find it either.
It should be somewhere I hope...

I have powered up the Mark 8. First without cards, everytime added
one single card, checked for heat and measured the power voltages.
Everything was fine until the mainsfilter blew So I bypassed that one for now.

I have waited with the eprom. When the Eprom data is saved I will put that one in.

I assume the Mark 8 should work without the eprom, but it's not for sure.
I can examine memory and the address counts one up. But I can't write anything in memory. 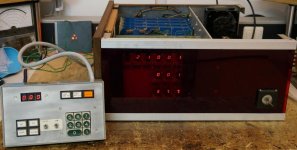 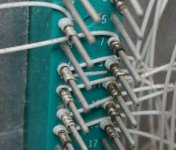 Roland Huisman said:
...I was wondering, how good is the quality of these wirewrap connections?
The silver turns black at many wires. Is it wise to solder all these joints?...
Click to expand...

Hello Roland,
WireWrap connection are generally long lasting.
The wire what is wrapped round the post is gas tight connected with the post.

Have you ever try to get solder float on older (black) silver coated wire and the posts? No chance!
Silver coated wire, which has a massive oxide coating tends to break easily.
When this already happend with your backplane wraps, i think the best is to rewire it again with wirewrap connections.

The machine has been stored for about 25 years in a horrible environment.
The topcover was completely rusted. The wooden panels inside were mildewed.
And note the huge amount of dirt between the cardholders... 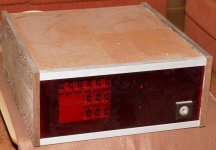 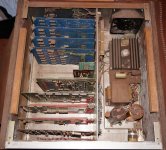 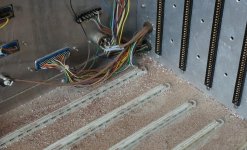 So I began to wonder how the quality might be from the wrapped joints on the connectors.
When I have placed the eprom back again I can tell more about it's function (I hope...)
And maybe there are some functions like deposit which would work. But I don't think
it has anything to do with the eprom.

I guess there is a tapeloader inside the eprom...

The remote was defective. There were only three zeros in the display.
I could not put a value into the display. In the meanwhile I've got a lot
of the original documentation of this machine. Including the Radio electronics from '74.

I began to draw the schematics from the remote. While I was half way I found
an NE555 which was used as a clock generator. But no clock signal. After replacing
the NE555 I had a clock again. But the panel did still not work.

Eventually I ran into a circuit around a 7474 which seems to be broken.
After replacing this 7474 the remote came back to live :D:D:D

So now I can read and write into each memory location. Still a lot to figure out. 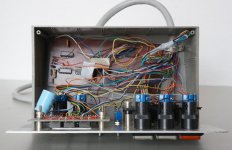 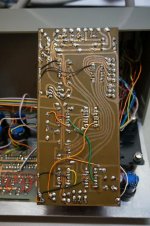 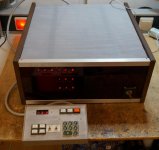 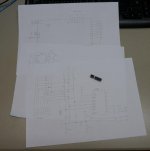 Further, the machine is quite well documented by the brothers Henk and Jaap Berkhoudt
who both made this machine in their youth...

Very cool. Welcome to the wonderful world of managing H&L registers by hand...

You should be able to use most of Mike Willegal's Scelbi software with minor modification. http://www.willegal.net/scelbi/apps8008.html

Thanks for the link! I have to figure some stuff out. The machine has 14K of memory.
So that should give some possibilities

The constructor of the computer really enjoyed the
pictures of the machine working again for so far.

He told me they ran moon lander on the machine once.
There is a complete book of scalbi basic with the machine.
There are some notes in it because of different I/O addresses.

Most SCELBI software that I have seen doesn't include I/O drivers. For example the Galaxy program is listed as 4K, but doesn't include any I/O software at all. I had to work pretty hard on tweaking it in order to make it fit in 4K with the added and necessary I/O drivers. A lot of the early/mid 70's home computer gear left a whole a lot to the user to figure out. This is very different than what we are used to with todays canned solutions for everything.

When I have time I will try to sort things out. There are many documents
that came with the machine. Probably a nice winter project.

An other thing is that my scanner is not supported under windows 8.1... That's also for
the winter. Maybe I will buy a new and faster one... Than I can scan the documents.

Can anyone tell me where I can find little test programs to test a Mark 8?
I've wiped the dust off of my Mark8. The last time I had the machine ready
to select a memory address and put data into that address. 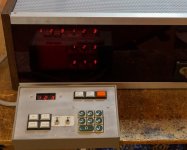 So now it is time to do a little more testing... I found many big programs
and futuristic stuff. But I would like to have a list of basic test programs.

Did you ever manage to dump the EPROM in the end?

I have been interested in the 8008 for a while. Too much of a faff to make a real one (although people keep tempting me) so I constructed a JavaScript emulator capable of looking like a Scelbi, Mark-8 or MIL MOD-8.

I note that you have a few interesting additions to your machine (LED 7-segment displays for instance). Are these described anywhere or were they 'homebrew' by the original constructor do you know?

I have just bought myself a little ESP8266 to run the i8008 emulator as a little project whilst in lock-down (although I am working from home and have less free time now than I did before lock-down!).

I would be interested in writing a few simple test programs for you if you can pass me details of your I/O capability on the machine.

I would also be interested in converting the HexPawn program from the games manual to run on your machine if you would be interested...

By the looks of the back panel there is/was a serial port at one time of day. Just thinking of how to get the user to interact with the machine...

Any means of saving to tape once you have loaded something by hand?

A bit of a distraction me thinks...

The EPROM is a project which I have to start over... It is too long ago
I had some contact with Martin Eberhart about reading the chip.
He told me that he has seen some chip failures where the internal
voltage reference is drifting away from 0. (The chip has no GND pin)
So I have to play with the eprom with different voltages. We will see.

But I think it has a bootstrap for the cassette reader. So if the chip is really broken
then it is probably not rocket science to use/edit an existing loader... (I hope)

There is a lot of documentation with this machine. I have to make that digital.
I now have an A3 scanner, so that should be a bit easier to do now.
But I'm pretty sure that I don't have all the documentation... There is a lot which I
have to draw back from the circuit boards...

The machine has also a board with a MCM6571 character generator.
So it has its own display card as well! There is a composite output on it.
I wonder what kind of OS they ran on it. Especially because
this machine has quite a lot of RAM. (14KB)

There is also a 12 pin keyboard connector on it. But I didn't get the
keyboard unfortunately. So any suggestions on that one would be nice!

But I'm sure that they used standard circuits from magazines etc.

The 7 segment LED displays were done in a very simple way.
Just use a BCD to 7 segment on de LED outputs and you are done

The man told me that he and his brother build two Mark 8 machines.
But they got really annoyed by the LEDs and switches.
That is why they made the programming interface.
The programming device is done by a shift register. I have drawn
the schematic from the PCB because there was an error on it.
This is also something I have to make a copy from...

I have to say, that interface works really great!

But if you could help me with a few test programs to check memory etc,
then that would be great. I don't have any experience with 8008 code.
I will check what I have for documentation. I hope this will help to find
the background on the cassette, monitor, keyboard and memory expansion.

Glad to help out Roland - it will be an interesting diversion to do something different...

Thanks for the website pointer to the excellent photographs. I will try and decipher the Dutch with my knowledge of German. It looks fairly straight forwards... If I get stuck, my son is learning Dutch whilst he is in lockdown!

As follow up to earlier questions, the 4702A and 8702A were the MCS-4 and MCS-8 equivalent numbers for the 1702A. Electrically they are identical.

Martin Eberhard's ME 1702A programmer is excellent and works very nicely.

Another alternative which is sleek (but much tougher to construct) is Matthew Millman's 1702A Arduino Shield. Construction is not for the faint-of-heart but it's amazing to have a 1702A programmer that is not much larger than an Altoid tin! http://tech.mattmillman.com/projects/a-compact-programmer-for-1702a-eproms/

Roland Huisman said:
Can anyone tell me where I can find little test programs to test a Mark 8?
I've wiped the dust off of my Mark8. The last time I had the machine ready
to select a memory address and put data into that address.

So now it is time to do a little more testing... I found many big programs
and futuristic stuff. But I would like to have a list of basic test programs.

I'd say, that is the nicest functioning front panel for an 8008 I've ever seen, although the MIKE series 8008's from Martin Research (see Byte magazine #1, first ad page) come close. BTW I worked in the 80's for the successor to Martin Research, Qwint Systems, run by the Martin Research founders.
S

gekaufman said:
Another alternative which is sleek (but much tougher to construct) is Matthew Millman's 1702A Arduino Shield. Construction is not for the faint-of-heart but it's amazing to have a 1702A programmer that is not much larger than an Altoid tin! http://tech.mattmillman.com/projects/a-compact-programmer-for-1702a-eproms/

That 1702A programmer is a freaking work of art; I'd daresay that is the finest 1702A programmer ever made or ever will be made. And I was so proud of my 2704/2708 PIC-based programmer that also used (off the shelf) step-ups from a USB power supply...
You must log in or register to reply here.
Share:
Facebook Twitter Reddit Pinterest Tumblr WhatsApp Email Share Link
Top