For a while now I've been working on a replacement for the Expansion Interface, which I hope will be of value since the originals are harder to obtain than the keyboard units. The PCB design, for all intents and purposes, is done. I've put a PDF of the layout here (the file is too large to upload to the forum) so you can see what I'm talking about:

The PCB is roughly 7" wide and 6.5" deep including the edge connectors.

I know I've mentioned this on the forum previously, but here's what it implements:


The vast majority of the stuff it implements has been finished for several years now; it was only a couple months ago that I decided exactly how I wanted the SD floppies to work, and wrote the software to do so.

Anyway, before I spend the money on fabricating PCBs and obtaining components, I need to decide what to do regarding an enclosure for this device. All along I've been assuming I'd figure something out, but I never really did.

I guess I was assuming that 3D printing would somehow save the day, but I think requirement #1 above means that would be impractical due to the large size required.

There's no conceivable way this thing will fit within an available standard project box due to the locations of the mounting holes and the many connectors/cables. Sure, I could make the PCB a lot bigger to fit some standard enclosure by moving the mounting holes, but the cost of the larger PCBs would likely become enormous. It's already pretty big as it is.

I've heard about solvent welding construction and T-bolt construction, but I'm an absolute novice at enclosure-building and those seem beyond my capabilities. And another thing: I'm not saying I'll be the one designing, building and selling enclosures. I'd be very happy if someone else wanted to do that, thank you.

The only idea I've come up with that seems practical and somewhat affordable isn't really an enclosure per se. A large (about 8x16" like a real EI) slab of 1/4" thick Lexan polycarbonate with leg hardware holding it up to support the monitor. Possibly a second, thinner sheet of lexan below to which the PCB would be mounted. This would at least allow for easy egress of the various cables attached to the MIRE. However, this has its drawbacks:


I've been asking a few knowledgeable people for ideas and opinions, but nothing so far has jumped out as the ideal solution. So I'm bringing the question here to the Forum. If you've got some ideas or feedback, we can discuss it here or we can do so by email. Let's keep it to the enclosure discussion, please; if you have questions or concerns about the design choices I've made let's use a separate thread or email.

There's still some work left to do, for example I need to install a bootloader in the PIC processor (used for the SD floppies) so you can update it from the TRS-80 without using a programmer device. I also need to expand the SD floppy app for full-screen operation. Neither of these will hold up the build like the enclosure question.

ps. I haven't yet sent out a call for Beta testers for the MIRE, but if you're interested drop me a line and we can start discussing it. I'd like to keep it to maybe 3 testers maximum. In exchange for your help you'll have the option to buy your MIRE at a deep discount, although I have no idea what the retail price will be yet.

For sure, it's got to be pretty sturdy to take the weight of the Video Display, and maybe a Voice Synth too. Anything off the shelf would probably have to be metal because project cases are not engineered to support that kind of weight typically.

Is asking to make it a drop-in replacement for a real EI too much? This way the user gets all the modern bells and whistles and reliability with the original look. There have been EIs on ebay recently that went cheap because they were not in the best shape or not working. And I'm sure there are a lot of EIs out there with bad internals. I have a few myself. You could offer a bounty for the EI cases maybe.

Another thought. As I think it was you that mentioned this in a recent Trash Talk show...wood provides a very nice 1970s hacker look.
D

I can see your quandary;

Vacuum forming may not be able to use material thick enough to support the weight of a monitor.

Injection molding is probably as expensive (if not more) than 3D printing.

Having a metal case may bring up problems with UL and CSA standards because of the electrical conductivity.

Wood enclosures would, probably, cost a lot in milling costs even if you used the cheapest wood you could find.

I'd be hard pressed to decide as well.
J

The CRT is heavy enough, but a Voice Synth too? It can't be done!

The premise of the whole MIRE project is that EI's are not readily available--well, not in good condition anyway--so putting MIRE into an real EI case doesn't seem realistic. We've seen the evil damage often done to those.

I really, really don't want to build the Lexan stack, but might have no choice.

Joe, this is an interesting project and if not cost prohibitive I think many would be interested in. I have an Exp. Interface board without a case and have thought about what would work and look decent for an enclosure. The cheapest I could think of would be bent sheet metal similar to the LNW case (photos). The main problem with your PCB is that there are output/inputs on all sides. If you could rework to all on one side or use "finger" connectors and ribbon cable to route all to one side your enclosure design would be greatly simplified. There are sheet metal services online or if you have hand skills you might be able to bend the metal using a hand sheet metal brake (about $40). Look at the LNW design, it is simple and looks good. 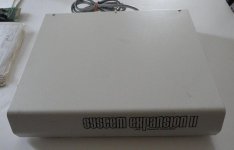 Thanks for the ideas. Unfortunately it's not very practical to put all the connectors on one side; to do so the PCB would have to grow much larger and more expensive, and it's already pretty big and expensive.

(I don't see in your photos where the ribbon cable from the keyboard unit attaches... presumably it must be near the front--underneath, maybe?)

However you can see in the PDF that most of my connectors already have box headers as alternatives, for attaching ribbon cable that could lead to a panel-mounted connector. This would be primarily useful for the printer port and RS-232, although doing cut-outs in the metal case for the D-SUB connectors doesn't seem straightforward. And this still doesn't solve the overall problem, because there are several other connectors that somehow need to fit. And I'd really like the SD card to pop out the front of the case, since that would become the primary means of transferring files to and from a PC.

Anyway, I'm still trying to figure out what to do and the sheet metal approach is something I hadn't considered. Will give it some more thought.
T

Ok here's the best, most elegant and practical solution. It's not the cheapest but it will be the most sensible one.

Looking at my photo if you make a PCB the size of 1/2 the EI PCB with the ports and Power button, as well as mounting holes (marked in red) you end up with a 160mm x 195mm PCB which mounts inside the EI case using the same three original screws, and the 4 connectors are still in the original place.

The main benefits of this:

1. Those with a dead EI PCB can install this in its place, they only lose the 3 cassette ports, and the RS232 connector is relocated elsewhere.

2. At 165 x 195mm its small enough to fit in any plastic or metal enclosure out there at a reasonable cost.

In this picture the ruler shows the size of the replacement PCB, as you can see the 4 important ports all come out the original places on the EI: 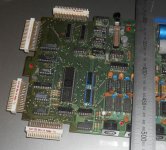 On the other hand, we still have people in my position where they have either a working EI boards with no case or a badly damaged case.

A full size case, for full sized boards would still hold the mini board if you were to use headers and cables to the case perimeter

Just a thought that may cover all contingencies....
T

For those with a good working EI PCB and a busted case, the following solution works very well and has the strength to hold the monitor on top with ease:

Something like this could be adapted to fit a MIRE and a FreHD in the one enclosure etc.

Well, there it is... practically the same thing I was talking about with the lexan sheets. I'm not sure it appears as unacceptable as I was thinking.

Joe Zwerko said:
Well, there it is... practically the same thing I was talking about with the lexan sheets. I'm not sure it appears as unacceptable as I was thinking.

its actually pretty slick looking. I like the way it shows off the internals.
J

Well I guess while I'm double- and triple-checking the PCB design, I'll start looking for parts; I've found the requisite lexan, but I'd like some better-looking hardware... who uses square nuts anymore?

A few judiciously-placed screwheads might solve the CRT sliding problem.

Let me repeat: I have no interest in building and shipping these things! At best I'll be selling the PCB with plans and sources for the case materials.

Bevel-head screws for the top, screw-on feet (or rubber bumpers) for the bottom, aluminum (or brass or stainless etc) tubing (to cover the threads) for the center (which would also eliminate most of the nuts).

Threaded hex or round tubing would also eliminate the really long screws. I see where you're going Mike, and thanks. This is a ways outside my wheelhouse, but it could lead to a really good solution. Need 90-degree drill bits and countersinks for lexan, all new to me.

Any better ideas for how to prevent the CRT from sliding off the top, other than needlessly-placed screwheads or posts? Actually short posts don't sound so bad, looking at the bottom of my barely-functional CRT...

1/8" stick-on rubber feet for the bottom of the monitor would work, but where's it going to go, sitting on a flat, level surface?

It's going to go on the floor. OK, so I'm clumsy, I knock things off of other things a lot. It's a particular skill I have. The original EI had some notches that fit some... protruberances on the CRT bottom. No flat level spaces for sticky feet, but good spots for some short (maybe 1/8") posts.

The top of the EI does have about a 5 degree pitch to properly angle the display that you also have to consider.
J

Where's Stella when we need her, Harcourt Fenton Mudd?

Yeah, more problems beyond my ken.

I'm thinking a flat platform and a short but great book propping up the front of the monitor, maybe one of Ray Bradbury's... The Halloween Tree, Farewell Summer, The Martian Chronicles, will do respectably.