Here's what I've done with a 9595-0LG and some parts! It's been a work in progress, and for all intents and purposes, still is.

Somehow, I turned into a hardware nut and wanted to see how much I could realistically get into this beast. In addition to the stock floppy drive, I added an additional 2.88MB floppy, a 1.2MB floppy, the 127MB Optical Disc and a CD-ROM. The latter two are SCSI devices, attached to a Spock controller with 2MB cache.

There is a three bay raid array in the lower portion of the DASD assembly connected to a Cheetah F/W Streaming RAID. It is populated with three IBM 4GB drives.

I wanted to put a tape device of some kind instead of the second 2.88MB floppy, but finding the appropriate bezel was becoming a futile search. I don't think I was supposed to add another removable media device, the CD-ROM bezel is hanging on for dear life and isn't really held in place by much more than the front frame.

I have modified a P90 complex to accommodate a 200mhz Intel Pentium. There is 256MB of ECC memory installed.

I've been using an IBM LCD as the display, it's connected to an XGA-2 adapter. I've got 64K of colors in Warp, 800x600 -- i'm pretty pleased, but there has to be some kind of boss video add on that must be floating around -- maybe an ATI Graphics Ultra Pro? I have parts to trade !! There's also installed an Artist WinSpirit, but it's not presently being used. I need to take it out, but i'm being lazy -- or maybe I haven't really finished with it yet, I'm not sure.

It has an Etherstreamer MC32 installed, but I haven't bothered to configure networking yet, as I intend on connecting it to a wireless bridge of sorts to get it on the WiFi.

I also have installed an Audiovation/A and a PCMCIA/A. The Audiovation/A I haven't got going yet, I need to find the OS/2 drivers. If anyone has a SB or compatible sound card for this that might want to trade for something else they've been in need of, again, I've got parts !! The PCMCIA/A is working fine under OS/2 and under DOS. I've got a Type III IBM 105MB PCMCIA disk presently installed.

The software is more than likely temporary, I'm not sure I'll keep the RAID configured as it is, but it's presently configured to dual boot MS-DOS 6.22 and OS/2 Warp 3 Connect, Blue Spine. There is an additional drive that I may attempt to put NT 4 on if I leave these drives alone.

Check out the pics, drop some comments, and if you need anything, let me know. 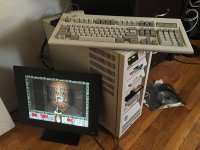 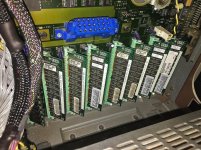 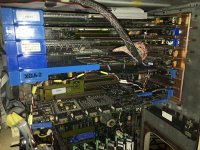 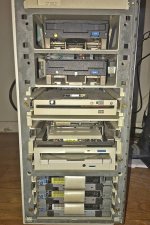 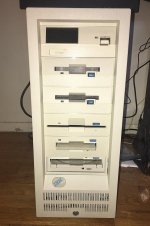 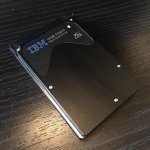 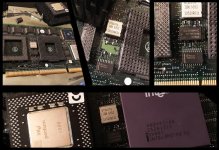 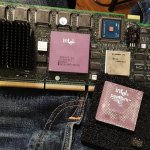 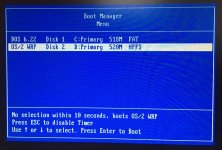 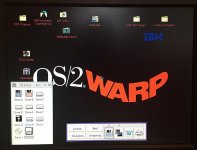 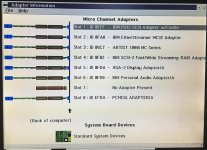 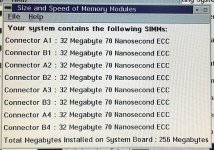 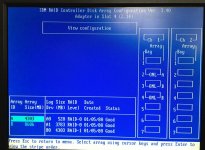 Very nice! Do you find you use the Magneto-Optical drive much? I still use the 2.3 GB version for backing up really important stuff, most of my old 128 and 230 MB cartridges get used with vintage computers nowadays. You can still find USB and FireWire external MO drives on eBay, though they are a bit pricey.

glitch said:
Very nice! Do you find you use the Magneto-Optical drive much? I still use the 2.3 GB version for backing up really important stuff, most of my old 128 and 230 MB cartridges get used with vintage computers nowadays. You can still find USB and FireWire external MO drives on eBay, though they are a bit pricey.
Click to expand...

I bought a piece of equipment that uses them, and wanted some spare disks.. ouch!
S


Excellent work on this project. I still think you should go to a period appropriate CRT monitor! But the LCD makes more sense space wise....


Excellent work on this project. I still think you should go to a period appropriate CRT monitor! But the LCD makes more sense space wise....
Click to expand...

In addition to the present list of desired adapters, i'm pretty sure i've got a 9521 with my name on it... space... space is the only thing preventing that from happening... lol

regarding the optical drive, i don't use it more than say the 5.25".. its the only device i have with that type of media, so it's not terribly useful. once i've gotten all the os configs worked out, i suppose they could be useful to image a system...

any thoughts on how i can enable more than 64MB in DOS? oh, and how about this, memory managers like emm386 and QEMM causing the ibm raid adapter bios to have a fit and halt the system?

it's all very dramatic. lol

I've been using an IBM LCD as the display, it's connected to an XGA-2 adapter. I've got 64K of colors in Warp, 800x600 -- i'm pretty pleased, but there has to be some kind of boss video add on that must be floating around -- maybe an ATI Graphics Ultra Pro? I have parts to trade !!
Click to expand...

Pretty much all of the video cards for MCA machines are nothing to phone home about. Even the ATI stuff is mediocre.

Except for one card...or...cards. The IrisVision

I have one. I know of two other people that have one but that's it. There used to be a guy who would sell you boardsets for $120 or so back in 2009 or something but I'm sure by now he's long since sold out. I don't think they work on the P90 anyways. It's a really weird board and really not all that impressive performance wise unless you like hot rodding. A type 3' 256k of L2 with an interposer and 5x86 on top looks a lot more impressive IMHO.
So how much did you spend in just MCA cards and ram? $200? $300? Some of those cards are not particularly common.
Last edited: Jun 5, 2016
M

How did you locate the ADF files for some of those cards? I used to work at a shop that had over 5,000 employee's so we had a lot of PS2 equipment and never saw one that stuffed!
L

how did i miss this thread? anyway, what are the part numbers for the 32mb simms? I have 8's in my 9595, and its "enough", but 256mb > 64mb and I shouldn't need to explain myself here. Also the raid card is neat, but the corvette card is so much quicker. I paired mine with a bog-standard 4.8gb scsi drive out of some server. Getting a scsi drive that will saturate 20MB/s is pretty easy.

I did see once on ebay a video card that had a boring cirrus logic chipset. a 5436 or something close. Havent been able to find one since. I'm mainly curious to see a standard vga chip compared to the ibm solution. For me and dos games, comparability > speed and I would think a CL chipset video card would be a no-brainer.

The majority of the boards installed, I had them new-in-box, complete with docs and software.

I have more available, let me know if there's anything you see inside it that you've been looking for. I don't have any Audiovation/A's left, but I have the Artist card and Etherstreamer 32MC NIB, i have Spock, XGA-2 (and XGA), Corvette, Passplay, Cheetah, SVGA and PCMCIA/A as pulls. (I have other cards as well, but there are so many to list... lol)

If there is anything you need, feel free to reach out.