Went to an electronics/Ham swap meet this weekend. The pickings were pretty slim there so far as vintage computers go but I did nab a few somethings, I guess:

While wandering about I saw three disembodied keyboards lying on the asphalt. I was discussing their provenance with a buddy when I was asked by the seller if I would like to have them for free. (They were were getting ready to go and didn't feel like packing them up.) So, sure, why not, I'm now the proud owner of three old keyboards.

Two out of three of the keyboards formerly belonged to TRS-80 Model IVs. They're the earlier model IV keyboard with cursor keys arranged like a I/III rather than clustered, and one of them still had a bezel with a 64k button associated with it. (I'm not sure what I'm going to do with these. They seem to be in good shape, with all the keys present and decent spring action. Maybe someone would be interested in a trade?) The third keyboard appears to be from a terminal of some sort but that's about as far as I'd guess. 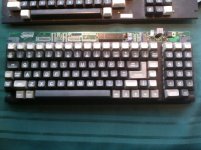 Ring any bells with anyone? It has an RJ-11 connector on the back, and the keyboard encoder looks like it's an Intel 8048 variant. I didn't find any obvious manufacturing logos or part numbers on it.

My first thought was Heath/Zenith, but turns out the layout is different: Looks like a Televideo keyboard to me; probably a TS-800/1600 series or one of the corresponding terminals. There were several variations, but all had the cursor keys down by the space bar. Someone was looking for a TS-803 keyboard last year, ISTR.
L

Chuck(G) said:
Looks like a Televideo keyboard to me; probably a TS-800/1600 series or one of the corresponding terminals. There were several variations, but all had the cursor keys down by the space bar.

Someone was looking for a TS-803 keyboard last year, ISTR.
Click to expand...

I'd say it's definitely a TeleVideo 950.
(I've also got a Stratus V101 which is a rebadged 950, but the keys are labelled differently). 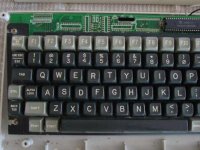 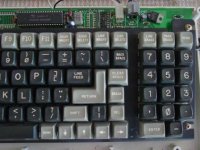 Soooo..... what do I win for the correct guess?

Lorne said:
Soooo..... what do I win for the correct guess?
Click to expand...

A gold star, definitely. TeleVideo 950 looks like a winner. The upper left keys match your description, and even the visible parts of the circuit board look like a dead-on match to the pictures you posted.

I'll be replying to your PM.

So, just FYI for anyone who spots this thread: the initially interested party decided the keyboard probably wasn't worth the cost of shipping given its unknown working status, which is a position I can certainly sympathize with. If anyone else (local to the Bay Area?) has a need for Televideo 950 keyboard parts I'll probably hold onto it for a while before cleaning house.
You must log in or register to reply here.
Share:
Facebook Twitter Reddit Pinterest Tumblr WhatsApp Email Share Link
Top