Found a Commodore 64 that looks like the breadbin and C64C combined on eBay: https://www.ebay.com/itm/132496648300 does anyone find the design odd? It looked like it was repaired by an Aussie or the case was purchased from Southern Australia. I'll put this here:

Thirty years ago, you could buy a "C" style case from a catalog, for use with the earlier style gubbins.

It was being sold for improved cooling. I'm surprised this isn't seen more often.

Having never bought one, I don't know if they were genuine Commodore parts with vents, or some aftermarket thing like this one.

This was an aftermarket case, to make your old 64 look like the new 64C when it came out:

I had one of those. It's a cool design but the case itself was pretty cheaply made. Not all that common these days but they did sell a number of them.
R

If I recall it had a hole for adding a reset switch and
for some reason the name lazer pops into my head
when I think about it..
R

There's also one labeled D-DOS as well (I believe for switching from the standard kernal to JiffyDOS. Interesting to see something like that. Got the system in one piece (big box, packing peanuts, 2 things of bubble wrap, and one big heaping hand of shrink wrap) on Saturday and put the system in my room to warm it up this morning before driving to work on account of the weather we're having today until Wednesday (my b-day).
G 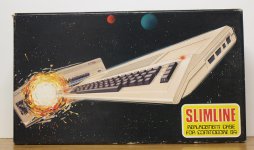 I have one of those cases around here somewhere, still new in the box.
U

Unknown_K said:
I wish they made the C64 in the color scheme of the C16.
Click to expand...

You would need new keycaps as well.
B

I had one of these computers several years ago. But, because it wasn’t “THE” Commodore I was looking for. I was and still want only those early computers I had direct experience with. So I did some looking and finally found a VCF member. I basically gsve it away by selling it on Ebay. In the end, I was given a pickup load of vintage computers, parts, and components. Athe time, my lifelong best friend Ed Hall, and I went through everything to find at least 7 commodore systems, among other systems. Needless to say, Ed and I were like in the toy department at Sears.

Now though, we’sold almost all of the Commodore computers, leaving the rest to Ed, or Ebay. I made a deal with an IBM 5161 Expansion Unit. Any way we made a deal where he would ship me one of his Commodore Monitor if I would troubleshoot his IBM 5161 components, the extender, and reciever cards as well as the cable that connects everything together. So basically I’m getting thr monitor for free. Hell, I had to open my PC and expansion unit anyway to remove the battery on my AST Plus.

When I go to work, it should take no more than 1 to 2 hours. Then I’ll pay to ship the IBM components back to the original member of VCF, and I’m done. So now I would like to complete just one working Commodore system that I will keep, and add it to my vintage computer collection. I just need to know what system peripherals I need to complete a decent setup I can use to show at Eugene Oregon library. Any advice?

The only thing you really need is a disk drive and maybe a pair of joysticks. I like to have a printer.
J

KC9UDX said:
The only thing you really need is a disk drive and maybe a pair of joysticks. I like to have a printer.
Click to expand...