I have recently obtained an Intel iPCB-76 PC-Bubble card. From the documents I have received with the card it appears to be the same as an iPCB-75 but with a BIOS extension for it to act as a fixed disk.

After double checking the settings specified in the manual and the errata pages that came with it, I set all of the jumpers to the suggested settings for a system with no Winchester disk and 1 card. I installed it, and it wasn't recognized. I double checked the jumpers and made 2 corrections and then it was recognized. I was able to run fdisk on it, and format it. When I tried to run select on it, it copies the disk's files to a point then gives me a drive not ready on write error. When I run sys on it sometimes it reports that the size is too small, but usually it gives a drive not ready on write error. This error happens on format c: /s and when trying to copy certain programs (seems to happen when I tried to copy basica to the drive. I haven't tried much else yet).

After choosing the fail option on the above commands it appears that the files that did copy copied just fine (and I have verified that the format and files copied stay after being powered off). I am able to run command.com just fine from the drive. The problem I have found is that when the system tries to boot from it, it enters a boot loop. Could the IRQ, address, and/or port settings cause this bootloop and write errors? I am using PC-DOS 3.30. The errata page mentions that it is compatible with DOS 2.0-3.1 PC, PC/XT, and PC/AT. It also mentions a DOS patch for PC/AT systems with a date of 1984. I followed the checks the document listed and my system appears to not need this patch. Could DOS 3.30 be too new?

The system it is installed in is an IBM PC/XT with MDA, what I believe to be a joystick card, and an FDD controller.

Also if anybody has any info on this card I would appreciate it. The documents mention a program called 4-SITE and the DOS patch. I am especially interested in these.

That card is only 500KB (4Mbit). Running it as a partitiioned hard disk (using FDISK) would seem to be a waste of valuable space. I wonder if you have a geometry issue.

Old Computers said:
When I run sys on it sometimes it reports that the size is too small,
Click to expand...

Is that the following known issue ?

No room for system on destination drive

Modem7, That might be the issue. I ran the sys command before copying over command.com. I did also try format c: /S but that gave the not ready error.

ChuckG, My goal for the card is to get that machine to boot without a floppy (I have no HDD in that system). When I ran FDISK on it I just followed the prompts. When I format the drive it indicates that there are heads 0-3, and 15 cylinders. Is there a particular geometry that is better than what it is currently using, and if so how do I specify that.

Thank you all for the help.

The photos I'm seeing of the card show a 5.25" floppy disk. Might it be possible that you need an Intel specific formatter?
O

From what I have gathered from the documents I have, a specific formatter is not necessary. That software is called 4-SITE, and it is a tool to directly access the registers and issue commands to the bubble memory controller. In fact the errata page included with the drive mentions that the 4-SITE software was not available at the time the board was distributed, but it would be in the future.

The errata page says to follow instructions in the user's guide for installing and setting up the board with fdisk and format. Unfortunately I don't have the user's guide, but only the reference guide, and it doesn't mention usage with DOS.

Just out of curiosity I thought I would try to see if an earlier version of DOS would work with the card. I found a DOS 3.10 disk in my collection, and when I ran FDISK and format C: /S with it, it worked just fine. It is just really odd to me that 3.30 would not work. Do any of you have an idea?
Last edited: Jul 11, 2015

I'd take a stab at it with the Norton Utilities disk editor. Even unformatted/unpartitioned, it should show you the Absolute Sector contents as presented by the BIOS. That would help rule out any hardware problems, and could shed light on what FDISK is actually doing. You could also use that to zero out the partition table on the first sector and start fresh.
O

I will give that a try. Which version of Norton Utilities should I look for?
P

Old Computers said:
I will give that a try. Which version of Norton Utilities should I look for?
Click to expand...

On a floppy only 8088 machine I'd probably use Norton Utilities Advanced 4.5 (They compress well with PKLITE to be very space efficient), although any later DOS versions should work fine if you can fit the parts you want on your disks.
G

Old Computers said:
I have recently obtained an Intel iPCB-76 PC-Bubble card. From the documents I have received with the card it appears to be the same as an iPCB-75 but with a BIOS extension for it to act as a fixed disk.
Click to expand...

I can attest to their use in CNC systems (usually Bridgeport BOSS series mills) in the distant past. I don't know who owns Bridgeport now, but maybe some of the old dlrs might have some usage info on these...

What were you going to use this for? Or is it just a neat item to fill out the collection? Bubble mem was (and is) pretty cool technology, but at $1200+ for the capacity of a floppy disk, it never made it into the mainstream. I know FANUC and several other CNC/PLC makers used it in their controls, too. Might be woth checking out, for historical purposes.

This item is more or less an interesting item for my collection. My plan for using this board right now is in my PC/XT. It has no hard drive or controller in it so I thought it would be nice to run that system without needing to boot from a floppy disk.

I will try to get some pictures of the card tomorrow.

An update on the DOS install. Like I mentioned earlier PC-DOS 3.10 has worked just fine with that card. It formatted just fine and copied the files on the disk over as well. It has held its data just fine too. I still hope to try to take a look with the Norton Utilities with it just to see why DOS 3.30 doesn't like it.

It's worthwhile to mention that the bubble memories were also used in ruggedized military gear. I think a couple of models of Grid portables used them.
G

Chuck(G) said:
It's worthwhile to mention that the bubble memories were also used in ruggedized military gear. I think a couple of models of Grid portables used them.
Click to expand...

Yeah, I remember seeing one of these in a naval installation, that was a "Tempest" rated system...

Here is a picture of the board: 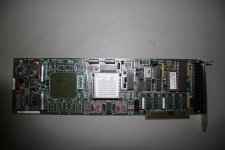 Thanks for all the information about bubble memory. It is quite fascinating.

And the card is still working. It has been about a week now and still doing just fine!
K

Have you contacted any of the web sites devoted to archiving bubble memory to combine your information with theirs? Seems to be a lot of lost documentation for the various bubble memory products.
O

I have not done so. Most of the sites that I have found were just brief histories, and didn't really go into detail. Any good sites that you know of?
K

One page heavy into examples of bubble memory is http://www.wylie.org.uk/technology/computer/bubblmem/bubblmem.htm

https://www.gsalmasi.com/almasiconsulting/bubbles/index.html is done by one of the inventors of the IBM implementation but light on how to use competing devices.

I think there was another site which covered usage of some of the floppy emulating bubble memory systems but I can't find a link to it.

Edit: http://www.decadecounter.com/vta/tubepage.php?item=30 has a bunch of PDF manuals. Probably would be great to add the missing manuals to that.
Last edited: Jul 26, 2015
O