PC vs. Mac vs. Linux 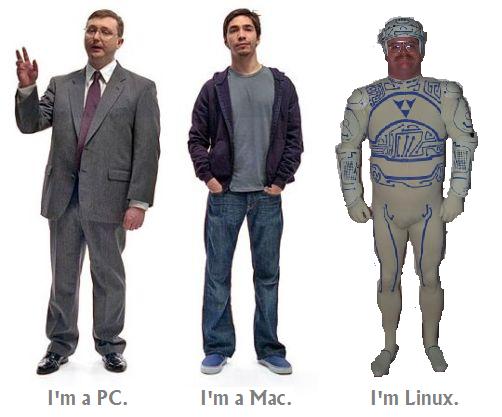 it's true though.
T

Location
At my computer

It is, I'm just shuddering to think of the kind of phlaming this thread could turn into. Maybe the mods ought to shut it down now and nip this in the bud. Don't want a flame war between linux/windows/mac fanboys.
L

personally, I have no preference between windoze, Mac OS or linux. I really prefer... *drumroll*

I've used all three, but Linux is by far the best, and the NT based windows is not as good as DOS-based, although I really prefer DR-dos. BUT, you forgot AmigaOS, BeOS,UNIX, QNX, BSD,OS/2, and a lot of others. And the reason I like linux is teh filesystem, terminal and applications and memory management.
B

..I'm just upset kuz I know that dude. lol. Well ok, I don't know him but I've seen him around once or twice in Austin. Guess that's a good tron suit or somethin. He was wearing some other costume at another event that I can't remember but he definitely digs his tron.
S

Kinda weird, comparing apples to oranges so to speak. PC and Mac are hardware platforms while Linux is an OS. No way to compare. In my opinion, since PC and Mac can run Linux, the Linux guy should be seen as a pet of the other 2, on all fours with a leash and collar!
M

i didn't mean it's true in a bad way or anything. linux is awesome.
L

strollin said:
In my opinion, since PC and Mac can run Linux, the Linux guy should be seen as a pet of the other 2, on all fours with a leash and collar!
Click to expand...

Hmm. Do you mean Tux?

Windows: Good for the average use, gaming
Mac OS: Good for palying some games, like Photoshop and multimedia production
Linux: Good for computer geeks, people who want to use something different, people who are tired of paying for computer applications, ECT.
D

linuxlove said:
personally, I have no preference between windoze, Mac OS or linux. I really prefer... *drumroll*

Lightweight, reliable, and you get to dirty up your hands with tech work. Also, It's free and doesn't beg you to upgrade. It has fairly good driver database, only real pain is that alot of stuff won't work with it, but on the upside all that stuff is usually supported on a user level. For instance, my phone didn't have any stuff to sync to Linux with (well, except as a mass storage device) but some poking around on the forums and now it syncs perfectly.

MacOS is pretty cool, too. Just WAAAY to expensive for what you get. Honestly, I think Apple has turned away from it's original values. Before, Apple computers were fairly cheap(like, the 80s). They weren't the cheapest, but hell they weren't 3-4 times the price of a PC with half the specs.

Traitors, use Amiga-DOS, or Dr-DOS, 80 bzillion times better, for a Disk Operating System variant, not really an OS at all

I gotta say that GEOS is one of my favorites (Commodore version, no less). Its got an interface similar to an early mac OS, but it seems more reminiscent of an early version of Windows to me. Still, a hearty OS- complete with Geopaint! I only wish I had two working 1541'sto use it to its full potential. Good times, eh?

Lightweight, reliable, and you get to dirty up your hands with tech work. Also, It's free and doesn't beg you to upgrade.

As much as I prefer Linux and loathe anything Micro$oft, I have to disagree on one point. Every day when I turn on my laptop running Ubuntu Linux, I am greeted with the [Update Manager] (which is actually trying to get my attention as I am typing this!) telling me that there are new updates that need to be downloaded. And when Ubuntu upgraded from 8.10 to 9.04, I made the mistake of letting the system do the upgrade. It took two weeks and a lot of twiddling to get my system back to running at the same speed it had been before the upgrade.

I've only been pushing Linux for about a year or so, so maybe I'm just not fully in tune with my inner OS
O

My better half runs Kubuntu and got suckered into the 9.04 "upgrade" too. That was a BIG mistake. First the network connection went south and the GUI manager was not accepting human interaction. Fortunately I can set that up by hand, but someone who is not comfortable on the command line would be in deep dooey. The next problem was that 9.04 does not recognize NTFS drives which puts one drive out of commission. OK, from my reading there is a fix for that. Again, some people would be SOL. Third there is no way to make any use whatsoever of the camera that used to connect with 8.04. Serious searching confirms that we will have to live with that. Since rebeltaz brought it up, I just had to get that off my chest.

That is why I hate Linux. I've been using it for years now and have come to accept some problems because it's free. I wouldn't tolerate ANY problems if I had paid for it. Apart from using DOS, I made the choice to not use proprietary systems when MS-Win-3.0 came out and that is why I don't use MAC either. Although I am a confirmed Linux user I am certainly no "fanboi". If Minix3 was a bit further ahead, perhaps I'd get more entheusiastic about that. Tanenbaum recently secured quite the grant so perhaps we'll see some more headway soon.
U

Which one I use depends on what software I want to use, they all have good and bad points. People get too hung up on the OS when the Apps are much more important in determining what you should use for an OS (and therefore computer).

As far as linux goes, it is getting just as bloated as windows and uses up tons of resources these days. Not sure you are better off running a new distro on old hardware like you used to be able to do.

For some reason I appreciate single tasking DOS more and more these days, same with Mac OS 7.1.

I run whatever works, including DOS. The problem with DOS is that its support for stuff like this is pretty poor.

I wonder why a 32-bit flat model MS-DOS wasn't ever deployed. No bloat, lots of memory. About the only thing close to it is 16-bit DOS with a DPMI server. Close, but like Win3.1, 16-bit DOS under the hood.
D

Location
You know, it just slipped my mind!

When I feel really frisky, I try OS/2. And if I've been banging around the bush, it's a minix!
B

I always found Tanenbaum's distaste towards linux. At least that's my interpretation of it, maybe I shouldn't say it as a fact. It just seems he was sort of snappy towards the product with a "pfft.. doesn't do anything minix couldn't do" view.

Though I did reference his books (given, I couldn't afford them new lol) so a back reference or two from half-price or used sellers at Amazon when toying around with our own x86 OS. I do appreciate his work and openness on techniques used and code shared.
O