I have a GridCase 1530, that was somewhat modified by some defense contractors in the 90s to fit into the space shuttle. I am having some trouble figuring out how to go about powering it on. 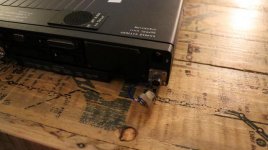 Here is a picture of the port used in place of the standard power supply.

What I know is that one of the pins is a ground pin.
One of the pins is switched against the power switch in the back of the laptop.
The remaining pin has resistance and is affected by the switch being switched to on on position.

The pin that is affected by the power switch is also cross-wired to one of the connectors in the rear power / battery bay ( it has continuity, and appears to have been purposefully wired that way )

I do not know whether or not the internal power supply has been modified, but the laptop itself appears to have been extensively modified internally. There is now an exposed CMOS battery, and the 'telephone' connectors have been replaced with high density connectors that are fed to what appears to be an entirely custom board ( the aesthetics do not match the rest of the device, and it appears to be more of a one off board than a fabbed one for that era ).

So, I am curious if you guys have any ideas on how to proceed in powering this guy on.
A

I also have a 1530. I'd love to see some good pictures of the modifications inside. I had to do the Dallas clock chip external battery fix to get mine working. The folks over at the yahoo grid group were helpful: https://groups.yahoo.com/neo/groups/RuGRiD-Laptop/info.

If you've had it open, why not just trace how the custom power port is hooked up?
K

if its connected to the battery it most likely is for charging it in case of power failure, the grid power adapter is 16v 4amp, some pics of the inside would great, i would not put a power supply that goes in the battery slot until you confirm the third line but 16v on the plug should be fine, does the internal power supply board look original?

Also, if it helps any, here are some photos of a stock 1530 power port. All of the power lines should run to the DC-DC converter board (highlighted with the red box around it). Good luck! 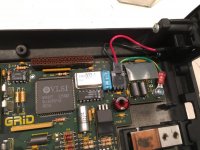 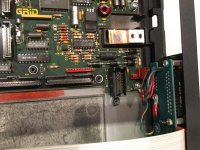 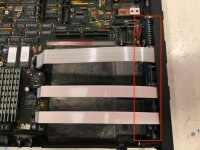