My roommates Packard Smell 486SX25 cache free wonder with the near defective oak VGA onboard was good for about 7FPS in doom and was basically unplayable above a postage stamp.

When I had hundreds of systems pass through my fingers every year most all 486sx25 I encountered were the same Packard Bell unit with isa and mediocre VGA .

We had several local retailers who pushed them, I had never noted a local bus 486sx, nobody bought them when local bus was common.

The 386DX40s I did encounter were all built for an enthusiast with cache, svga, a decent hard disk and controller and usually more ram.

One of my friends fathers built a dx40, cache, 8mb ram, cd, sound card, svga local bus and a quantum fireball hd for about the same price as the Packard Bell 486sx-25 with the defective onboard VGA and a small glacially slow hard drive (monkey island would only run in EGA on that onboard vga d)

Considering what was on the market back in the day the dx40 was usually a much better deal than the gimped 486sx25s that hit the market with a good cpu but everything else being extremely outdated.
Most mothers had a PB 486SX25 in their home office but enthusiasts didn’t buy big box store sx25s as they weren’t a good configuration or value.

Some of these big box store 486sx25’s had 2mb and an 80mb hd out of the box despite still sporting a $2k price range.

Could people have bought a cheap 1991era 486sx and place it in a 1993 era vlb board? Sure but it didn’t happen much as you couldn’t buy one at the store configured that way when the sx25 was the mass market chip.

Even when VLB was relatively common the 486sx chips stayed as a base model with outdated sub components, it wasn’t until sx2 systems were common that you saw people actually buy multimedia sx systems, did multimedia 486sx25 systems exist? Sure just that nobody bought them, those wanting multimedia either built their own from the computer shopper or splurged for a better cpu since the money was nearly as ridiculous for a DX or even Dx2

The 486sx25 like the 386sx16 stayed marketed by the big box stores as a bottom of the line entry system even though the 486sx25 was a much stronger chip than a 386dx which usually sold with a respectable configuration as it was viewed as a real computer and sx chips as entry level toys to clear outdated sub components.
In fact my roommates pb486sx25 actually used the same components found in a year older 386sx and even 286 systems.

The few exceptions that didn’t skimp on parts like the Tandy sensation did not sell well
Last edited: Jul 4, 2022
W

As I recall, it ran Doom fine.

The quirkiest thing it had was a click on thumb ball, and I swear the machine would speed up when you moved it. I had distinct memory of seeing some kind of task bar going faster as I was spinning the ball.
R

As I recall, it ran Doom fine.

The quirkiest thing it had was a click on thumb ball, and I swear the machine would speed up when you moved it. I had distinct memory of seeing some kind of task bar going faster as I was spinning the ball.
Click to expand...

The laptop sx25 was one place where you potentially got a newer better set of components, my relatively early B&W Compaq 486sx25 laptop did not run doom “well” but I don’t remember benchmarking it either. The 120mb hard drive was very disappointing.

commodorejohn said:
I'd never heard about those! Very nifty.
Click to expand... 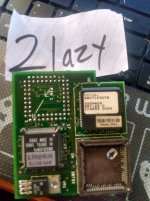 Kingston kept the 'GAM' identifier just like on the "SX Now!" when they rebranded this module - although it fits other 286 systems, it's made for the PS/2 Model 50 and 60. This is at a point where IBM was releasing the 486SLC2 CPUs for upgrades other than their systems (which was supposed to be the constraints of the 386SX codemask sharing to IBM from Intel). It may have been late enough that Intel didn't care as much.
D

The quirkiest thing it had was a click on thumb ball, and I swear the machine would speed up when you moved it.
Click to expand...