Recapped ZX Spectrum (Issue 3B) and now the Colors are wrong?

So I got a 48k Spectrum (Issue 3B) some years back and while for the most part, it works, it always had a lousy picture (noticeable vertical bars in the main field and diagonal wavy lines on the bottom). Basically, it needed a recap (also it was starting to randomly crash). So I recapped it. As near as I can tell, the system seems mostly good now. It boots more or less reliably (occasional glitch, but far less than before), no longer crashes, and the video artifacts from before the recap have more or less gone away. However, the colors are way off?

In testing the machine (I used the BASIC Border command), blue is black, green and cyan are indistinguishable from one and other (as are red and magenta), and yellow is light pink?

For info, I am in the United States, so this has been composite modded with a 100µf capacitor bypass to the RF, and I have been using both a Sharp Aquos LCD and a TCL 41in 4k LED TV as a monitor. Both TVs worked perfectly with the spectrum before the recap, as well as my PAL C64. Both have been tested with my PAL C64 since and give a perfect picture.

I've gone over this a dozen times. All caps appear to have the correct µf values (voltage ratings are rather high [some as high as 50v for what should be 10v], but I was told that shouldn't matter?) and are installed in the correct orientation (I don't think it would boot at all if they weren't). I used the kit from Console5 which is supposed to be correct for my revision.

Any ideas as to what I'm obviously missing?
J

Check all voltages, specially the LM1889, it needs 12V. Also try to adjust the color pots, maybe they're out of spec, check this: How to fix Issue 1/2 yellow or blue screen tint
C

Issue 3 Spectrums don't have the colour pots, but I suspect the LM1889 is the thing to check/swap.

And also make sure the transistors are ok. They can sometimes short between pins, especially TR4.
D

Checked the voltages to the LM1889, and the voltages seem good (11.95/11.96v). No shorts on TR4. I did replace C25 again, as it was suggested that an out-of-spec capacitor at that location could be a culprit. Also, I had a spare from the kit (included for other revisions of the board). There does seem to be a slight improvement in video quality over the previous capacitor, so maybe that was the fix? Unfortunately, I won't know for a while as the contacts on my keyboard membrane disintegrated. Unfortunately, it's a newer one with plastic insulation over the ribbons, so I can't just trim it. As such, I will need to get a replacement before I can test the colors again.

Oh dear. You mean the plastic strengthening part behind the ribbon contacts? You can remove that or trim it, the main thing is that the silver shiny parts contact the springy contacts in the sockets. They are a pain though as the splits are not always easy to find.
D

Sadly no. This is a replacement membrane that has been laminated up to the contacts, which seem to have been silkscreened in conductive paint. the paint of the contacts disintegrated off the plastic up to the laminate, and there's no way to remove the laminate either. So trimming isn't an option. I've ordered a new one, hopefully of different construction. It was difficult to see from the picture.

#DistantStar001 So what happened with your spectrum?
D

VERAULT said:
#DistantStar001 So what happened with your spectrum?
Click to expand...

Sorry! I totally forgot about this post. Long story short, it's still not working. In fact, it's kinda gone downhill since the last time I posted.

So far I've replaced every single IC except for the LM1889. I've also replaced TR1, TR2, TR4, and TR5 with no luck. All I get are the thick black and "white" bars with a black border. I did get a new membrane for the keyboard though.

All the voltages seem right, but it's not booting. As such, I've reluctantly set it aside for the moment in favor of taking what might seem to be a rather extreme approach to the repair...

I'm building an entirely new motherboard. I got the PCB off eBay and have managed to get all the passive components soldered to the board. I have also obtained a Z80A, switchable ROM, (Nebula) ULA, and the LM1889, but I haven't installed them yet as I'm still testing the voltages. My hope is that if I can get this board to work, I can use it to diagnose the issue with the original.

Honestly, the only reason I came back to this was that I was going to ask about the voltages on the new board. But since this is related... here's what I've got:

I've tried two different power supplies but haven't noticed any significant difference in voltage on the board. The first is an original European Sinclair supply that came with my Spectrum+ (yes I have a step-up transformer giving me 220v). It's rated at 9v, 1.4 amps, center negative.

The other is an American (110v) generic brick, rated at a similar 9v DC, 1 amp center negative.

Both supplies work on my Spectrum +, and the latter was what I was using on my original 3B before it went bad. Also, both bricks are unregulated and seem to be putting out about 12 to 12.5v (a bit high, but within expected ranges for these kinds of bricks).

Side question: Would either of these work for a +2? I have one coming in a few days.

Anyway, voltages are as follows:

So far I think the voltages look good, but I want to know if I should be concerned that the 5-volt lines (both positive and negative) are a little low since the board isn't populated yet (hence a minimum load)? I should also note that I was offered (and installed) a more robust version of the 7805 than was used in the original. So I don't know if that has something to do with the lower voltages I'm seeing?

Anyway, that's where things stand for now. I haven't given up, but I'm certainly taking a roundabout approach. 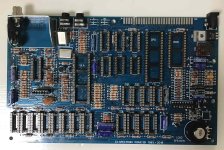 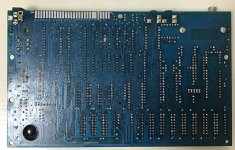 >>> So far I think the voltages look good.

Why ‘think’ when you can check the data sheets?

The 4116 DRAM data sheets state that the power supply rails have a 10% tolerance.

How are you measuring these voltages out of interest? If you are using a multimeter, this may not be telling you the truth. The DC voltage should be within the stated tolerance band, but the AC noise (as measured on an oscilloscope) should also indicate that the noise is not excessive either. High frequency ‘noise’ will cause a multimeter to ‘misread’.

The -5 V rail on Sinclair machines is notoriously troublesome, so should be investigated carefully.

This supply rail drives the DRAM, so could cause misreads/miswrites by the CPU or (if it fails) damage the DRAM.

daver2 said:
Why ‘think’ when you can check the data sheets?

The 4116 DRAM data sheets state that the power supply rails have a 10% tolerance.

I've been told that some of the documents that I've been working with have errors, so there has been some guesswork trying to reverse engineer the new board from the malfunctioning original. Still, from what I can tell, I seem to be on the right track. I just need to figure out what's pulling the -5v line low.

daver2 said:
How are you measuring these voltages out of interest? If you are using a multimeter, this may not be telling you the truth. The DC voltage should be within the stated tolerance band, but the AC noise (as measured on an oscilloscope) should also indicate that the noise is not excessive either. High frequency ‘noise’ will cause a multimeter to ‘misread’.
Click to expand...

I've been using an admittedly cheap multimeter. Sadly, both of my oscilloscopes are non-functional at the moment. And it seems that in order to fix a broken oscilloscope, you need a working oscilloscope.

daver2 said:
The -5 V rail on Sinclair machines is notoriously troublesome, so should be investigated carefully.

This supply rail drives the DRAM, so could cause misreads/miswrites by the CPU or (if it fails) damage the DRAM.
Click to expand...

Yeah... I learned that lesson the hard way.

New question: About the jumpers? I basically copied the jumper settings from my original board (which is fine for testing), but it occurs to me that before I start populating ICs, I should really understand how these settings work. Any info would be appreciated.
S

The attached panel from the Spectrum service manual may be of interest: It shows that the design spec of the -5V rail actually has quite a wide design tolerance, certainly wider than that suggested in the RAM datasheet.

The DC-DC Converter circuit seems to have evolved quite a bit through the various issues. There is a section in the service manual, link below, page 48, dedicated to the modification of the DC-DC Converter - this section is original Sinclair text but there is a red warning not to actually attempt the mods detailed in that section (...scratching my head). 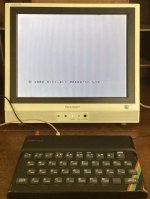 There still are a few issues. I tried loading a game from a .wav file, but it couldn't hear it. Not entirely unexpected, as all three of my 48k Spectrums need a volume boost to load programs. I'll have to dig out my cassette player. The computer did react to the input though, so at least I know the port works. Also, the video port is a bit loose on the bracket, so it's not well-grounded, causing the video to cut out if moved. But that can be fixed.