A picture of a friend's project from about 50 years ago. It was apparently surplus satellite telemetry recording equipment, I forget if the drives were 5 or 7 track, but they weren't 9. All analog gear and the tape transports would do a wide range of speeds. At the high end he found he could record grainy video and at the low end it would run a tape for many hours. In his application he ran a background music business where you could use a leased-line to connect to these long-playing tapes. Dialing a number into your leased line would activate a crossbar affair which would determine which channel of the tape you heard, so not really a computer but computer-adjacent. Interesting Minnesota Mining and Manufacturing was using "Mincom" as an abbreviated name at the time these were produced.
Sadly, this rack all went to scrap when he lost his place in about 2000. 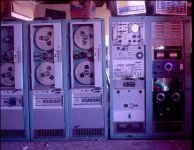 Is that a Veeder-Root tank monitor box I see? (That goes back to my late '90s job of writing 6809 code to talk to gas pumps.)

The larger drives are instrumentation drives--primarily used for analog data. The number of jumpers on the amplifier leads me to believe that they're 7 track. The manufacturer's name is to fuzzy to read (Minicord?) These were not designed for start-stop operation, but rather continuous recording. Very commonly, analog signals were recorded as FM. They really consumed tape--some models uses 19 inch reels--these look to be 15 inch.

Is that a Veeder-Root tank monitor box I see? (That goes back to my late '90s job of writing 6809 code to talk to gas pumps.)
Click to expand...

More than likely, he did programming for a local oil company.

It sounds like "Mincom" was a division within 3M, not an alternate name of the company. 3M Mincom seems to have been involved in some of the first digital-audio recordings.

Thanks for the closeup of the recorder badge! The history of Mincom is fascinating. It started as the electronics division of Bing Crosby (yes, him!) Enterprises. Bing wanted to record his radio and later, TV shows. In 1951, they demonstrated video recording. The cited article is full of references for the curious. The company had a tie-in to Ampex, which made a pile of cash selling equipment to the government. 3M acquired BCE in 1956 and renamed it to the Mincom division of 3M. Apparently, Bing did a lot more than croon, do "Road" pictures and play golf and drink orange juice.