I've got two Commodore PC-50 386 era machines here, neither run and it's very clear why. Around every SMD electrolytic nearby components/solder/traces have been attacked by corrosion. The caps are replaceable - but I was concerned about the damage, each one was like a little NiCD battery. All of the caps I tested after removal showed as open circuit on my ESR meter.

Have others seen this? I knew they leaked but I haven't seen corrosion because of it before.

It happens. Depending on the vintage of the caps, the electrolyte is more or less corrosive--and cap seals are more or less effective.

If you want to do the replacements and avoid this, you can use Aluminum Polymer Capacitors, but you may have a problem finding the correct physical size. A lot of modern motherboards have turned to this technology.

Commonplace on Macs from about 1989 through about 1993ish, also common among certain video game consoles, Sega Game Gear, Pioneer Laseractive, and probably many others. Those early SMD aluminum electrolytics are a plague, they always seem to always leak and weaken pads, making it easier to lift when replacing them and sometimes if left long they will eat traces and even the legs off ajacent chips.

I recapped a Mac LC III two weeks ago and lifted a few pads removing the old caps, one the whole trace was gone, I had to jump one cap lead over to a nearby chip where that trace orignally went to. I have such a hatred for these electrotytic caps that I will use tantalum caps most the time when I replace them. 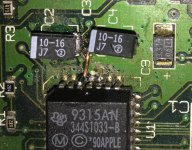