Background
I have a couple SSM VB1B video cards. I'll refer to them by their serial # The one I have working is 1133, the other I'll call SN BB because 'Bad Board' is etched with an electric pen on the foil near the SN which is blank. I'll start a separate thread with the BB sn most likely when I get back from VCF West. They were both kinda working.... I had trouble actually writing characters to them. The address selection didn't seem to be working. I took another shot at them in the last couple days and with the help of Martin's Amon I made much progress. Using the SEarch command of Amon I found the address of some strings displayed on the video monitor. I used that address with the ENter command and there we go I can write to the card. But the address I found was not how I had the switches set. Anyway I yanked out the DM8131 Comparator from BB placing it in 1133. Cool! It addresses correctly. The weirdness of BB memory addressing I'll cover later in another thread.


DM8131 Substitution?
Are there any substitute parts / part numbers for the DM8131? I ordered four of them from Ebay but I'm thinking/hoping I might have something suitable in stock...

Top line distortion
Notice on left card 1133 with the addressing working the top line is distorted looks a bit like vertical stability. The second image is the BB card notice how clean this 1st line looks. And a detail of the "Bad Board" etching SN.

Any suggestions for addressing the top line problem? 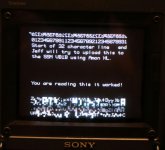 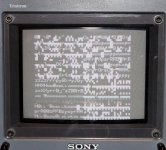 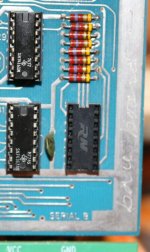 Amon HL loading
I experimented with writing some text and assembling in z80pack emulator then used Amon HL to upload the .HEX file. Maybe a buffer over run, or timing I don't know. But I had to end up breaking the text into two files with two ORGs and using HL twice. If I had just a single .HEX file for all the text it appeared to only read ~ half.

In another thread Need help getting SSM VB1B video board working But I don't see the .ASM linked. Is there somewhere I might download this file? Any other gems for the VB1B?

Conclusion
Well with all that I'm pretty pleased with how the VB1B sn 1131 is working. I'd like to clean up that first line and find some source code for a driver... It's been working consistently for hours and I've cycled the power several times.

Never mind this whiny reply. I found the Code tags with a nudge from Chuck (G) Code tags are on the advanced menu. FYI I cleaned up the first post in the thread with code tags which preserved the spacing in the DB lines.

Hey! Hey forum software what gives! in those two .PRN listings the lines looking like '' were actually ' ' when I uploaded them I guess the spaces got trimmed - just as I had the Post title capitalized. I feel folded, bent and spindled! ;-) 32 spaces. The card can do 32 or 64. I have them in 32 column mode so the 32 spaces gets us back to col 1 on a new line... OMG! my 32 spaces just got trimed in this reply! Let's try with a double quote " " Well that was ten spaces trimmed to one by the forum software.

The video monitor in the first message of this thread was a five inch monitor. Here is another image with a thirteen inch monitor and the VB1B switched to 64 col. mode. 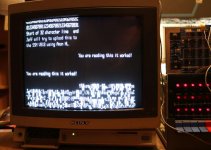 This thirteen inch monitor doesn't have any over/under scan adjustment. It shows the same tearing on line 1 as the five inch monitor shows and the VB1B looks over scanned trimming some of the characters.

Nice work! The VB1B is a nice little video board. IIRC I discovered with mine that poking bits into the memory with the IMSAI's front panel would lock out the video circuit -- you had to move out of the video RAM address range for anything to come up on the display.

Don't use the "quote" tags when you really mean to use the "code" tags. That will preserve formatting.
J

Chuck(G) said:
Don't use the "quote" tags when you really mean to use the "code" tags. That will preserve formatting.
Click to expand...

Implemented CODE tags in the original post restoring the spaces in the DB statements.

Last night while posting I looked all over for 'code' quoting. This morning I found it on the advanced menu, while HTML and PHP formatting are on the single line menu. If configurable perhaps move code quotes to the first line...
Last edited: Jul 29, 2018
J

glitch said:
Nice work! The VB1B is a nice little video board. IIRC I discovered with mine that poking bits into the memory with the IMSAI's front panel would lock out the video circuit -- you had to move out of the video RAM address range for anything to come up on the display.
Click to expand...

I remember you saying something about having to read memory for it to display but I didn't understand what you meant at the time. I guess it wasn't a problem with me this time around because I was using a ROM monitor, Amon, to manipulate the video ram address space and the monitor returned to it's own address space.
J


jhalbrecht said:
Background
I have a couple SSM VB1B video cards. I'll refer to them by their serial # The one I have working is 1133, the other I'll call SN BB because 'Bad Board' is etched with an electric pen on the foil near the SN which is blank. I'll start a separate thread with the BB sn most likely when I get back from VCF West.
Click to expand...

FWIW I started working on the other VB1B S/N; BB I couldn't read the schematic as the scan was so faded. I went on a hunt for a different copy. Seems all the various sites including mine and John's use the same (faded) copy.. But Score! I found another one at Bitsavers that is very clear and OCR'ed. I've got a copy here. I tried to attach it to this thread but it's apparently larger than the limit. Look here on BitSavers for this and other SSM manuals...pdf

Can you tag users in a vBulletin post? @monahan_z

This is a long shot, but I have recently built up a Solid State Music VB1 board using the schematic and parts list for the later versions of this board (ver. B) and discovered there are version differences and the board did not work.
There seems to have been small changes to the design in the later revisions. In particular, the IC's used are different for the version VB1 board I have (S/N VB1A 005).
I started trouble shooting by tracing the crystal timing circuit with a scope and where the crystal signal entered the IC's made no sense ( going to an output?). So after following the board traces and looking at the IC's that the designers used, I saw that by switching out some IC's (U31) the circuit made more sense and sort of worked. The timing is now double what it should be as noted in the theory section. So there must be other IC's that are different between the bersion A and the version B boards.
My question - does anybody have just a "parts list" for the SSM VB1 board...not for the VB1B or VB1C but the original VB1. I know this was sold for a while as there are ads in old issues of Byte magazine.
So if anybody has this info or knows of a website that does; it would be appreciated and save me from having to trace out the entire VB1 board. 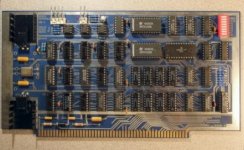 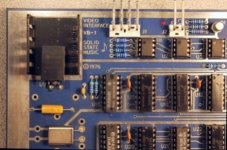 TinyURL Photo of Board: