After getting the TravelMate LT 286/12 and seeing how good of a laptop it was, I decided to get one of the newer ones that I have casually wanted for many years and see if it they are any good or not.


I knew the charger was weird and very hard to find, so the plan was to power it through the battery contacts. So when I received the laptop, I did just that and got it working! The screen was very dim at first, but it brightened up after a few seconds (those old backlight tubes take a bit to wake up after such a long sleep). It was all working except for the hard drive.


Upon opening the unit, I was happy to see not only the original 60MB Conner hard drive, but also a 2MB memory upgrade! That gives this unit 4MB total.


Here's an internal shot as well as some close-up pics of the hard drive removed: 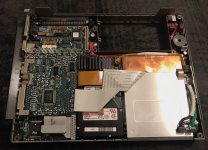 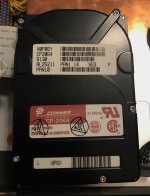 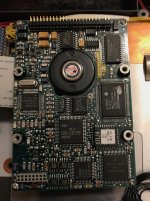 It's a Conner CP-2064, to be exact. I like these Conners because they are usually very reliable and easy to fix as long as the gasket hasn't turned to goo and gotten all over the platters, which this one hasn't, so I did the usual repair on the rubber bumper, reinstalled it and it booted to DOS 4.01! DOS 4.01 is indeed what this laptop ran originally, but that's most certainly not what I wanted to run on it, so I backed up the important stuff, formatted it and installed DOS 6.22. The drive is in perfect health with no bad sectors.


The floppy drive had the usual belt that has rotted, rendering the drive non-functional. I did replace the belt, but it still wont work reliably, I have only gotten it to read a disk a handful of times. I did see one SMD aluminum cap in the floppy drive, so maybe that bad and causing some issues.


Here is a pic of the laptop in its entirety, running Windows 3.0: 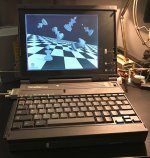 Pretty good looking laptop, I must say. I love the little brightness and contrast "wheels" and the switch for reversing the LCD is super cool.


Here is a shot of the ports on the side, as well as one of the unit closed: 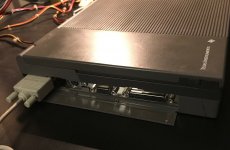 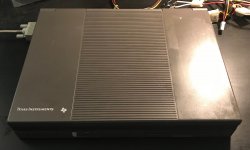 Here are CheckIt benchmarks of the CPU and hard drive: 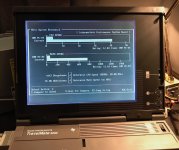 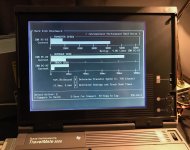 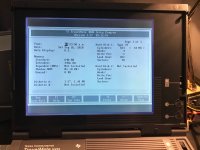 And here's what Wolfenstein 3-D looks like on it:mrgreen: 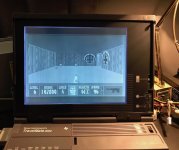 I actually really like playing it on these old grayscale laptops.

Another thing I observed on this unit is the hinge mount design; it's REALLY GOOD!


Here's a pic of the inside of the display housing so you can see: 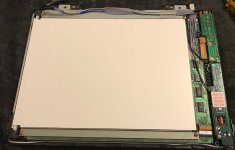 The housing is upside down here, so look to the top. Notice that big steel plate the hinges bolt against. This disperses the pressure from the hinges evenly, which makes for a solid hinge mechanism that wont fall apart. Very good design.


I'm really liking this laptop so far. I've still got some other stuff I want to do to it, so I'll be posting that here, but for now that's about all.

The next step for this laptop is to create a proper power supply for it, because using this ATX PSU is a pain.

I’m going to install a regular barrel power connector in the empty spot where the modem jack would be if there was a modem, and just run the two wires over to the battery contacts.

I have a 5V 4A power adapter on order, so hopefully that’ll be here soon.

And I’ve got an old, corroded main board from a Macintosh PowerBook that I’ll be harvesting the power connector from.

This will be an extremely easy thing to reverse when I finally find an original power supply.

Got the power supply mod all done. Works great. Now I’m changing some of the caps in the laptop as preventative maintenance. I don’t have them all on hand but I have most. I’ll order the rest eventually. Thankfully there isn’t too many electrolytic caps in these. Just a few in the power supply and only one on the motherboard. There’s a few on the LCD too, but pretty much all LCDs have a few anyway.

Okay, so here's what the power connector looks like: 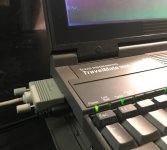 Pretty happy with it. The empty cutout for the modem was perfect, as I didn't have to modify the case in any way. And I was very easily able to run the two wires from the power connector right over to the solder pads for the battery contacts.


And here is the internal power supply board that is mostly recapped (the two marked out with a red "X" are the only ones I haven't changed yet):

I also changed out the one on the motherboard (didn't get a pic though).


Also, I have another one of these on the way for parts. The place I bought this one from has several and I went ahead and bought the one they had with a broken LCD (since it was cheaper than the rest). Some of the case parts on it look to be in better condition than my unit, so I'll probably combine the two to make one really nice unit. This will also give me a spare motherboard and stuff, which is always great to have.

I'm also hoping that since they appear to have all came from the same place, it will have the same 4MB RAM configuration, which will allow me to take the extra 2MB out, install it in mine and get it up to the full 6MB!


Oh, and I also replaced the one SMD cap in the floppy drive, which was leaking. It didn't help though, the drive still doesn't work right, unfortunately. Not sure what the issue is. Maybe the belt isn't quite the right size? Who knows. It'll also be helpful to have the other floppy drive from the parts unit so I can have a better change at figuring out the problem. If I can't get either one of them to work then it's probably an issue with the belt.
Last edited: Oct 2, 2020

The other TravelMate I got did indeed have another 2MB of RAM, so mine now has the full 6MB!

Here's a pic of the ram sockets all full: 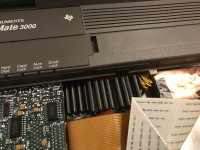 And I now have other spares like an extra 60MB Conner hard drive, motherboard, internal power supply, etc. The shell of the one with the broken screen turned out to not be so nice; it appears to have possibly been dropped and some point, which probably explains the busted LCD. Oh well, I did get the cover for the "keypad" connector on the right of the machine, which mine didn't have, so that's cool. It was worth it just for the RAM alone to me.

I should also mention that replacing the caps has fixed the issue where the speaker would have "static" sometimes when it was cold. Like a TV not tuned to a channel. I haven't heard the static since replacing the caps. I'm assuming it was caused by the one, big cap on the motherboard, since it was right next to the speaker connector. So I think it's safe to say the electrolytic caps in these definitely need replacing, which isn't shocking considering they are basically three-decades-old.

Hi. I recently purchased a TravelMate 4000 that came with two batterie, one which doesn’t work at all and the other will power the laptop for about 5 minutes. The laptop doesn’t work unless the battery is plugged in and it won’t power on at all without the battery. Is that right? I have a Toshiba laptop from the same year that will work without a battery. I had to ask this on your post because I currently don’t have enough post to send a DM. Sorry.

Retro_Nerd said:
Hi. I recently purchased a TravelMate 4000 that came with two batterie, one which doesn’t work at all and the other will power the laptop for about 5 minutes. The laptop doesn’t work unless the battery is plugged in and it won’t power on at all without the battery. Is that right? I have a Toshiba laptop from the same year that will work without a battery. I had to ask this on your post because I currently don’t have enough post to send a DM. Sorry.
Click to expand...

That’s really odd that it won’t work without a battery, that doesn’t seem right, but I’m not 100% sure because I have no experience with that model.

Actually, it was the power supply that was broken. It quit working, so I was able to buy another one on ebay, at a hefty price. The laptop powers right up. Thanks for replying.
S

I recently got two of these computers from an ebay listing but the batteries seem to have leaked all along the bottom and side of the computers and even a little inside leaving an orange tinge on some parts... do you know if its dangerous to continue to keep working with this computer because from what I've found its an old Nickel-Cadmium battery?

Superfly935 said:
I recently got two of these computers from an ebay listing but the batteries seem to have leaked all along the bottom and side of the computers and even a little inside leaving an orange tinge on some parts... do you know if its dangerous to continue to keep working with this computer because from what I've found its an old Nickel-Cadmium battery?
Click to expand...

Very nice! Do they work? These are really cool laptops.

Just clean it up best you can (with rubbing alcohol and white vinegar), wash your hands thoroughly afterwards and you’ll be fine. Not a big deal really.
S

Thanks! I'm not sure if they work because I don't have the charger, and I'm planning to make a just one working computer because the screen is cracked beyond repair on one of them. Theres probably a solution to that but I just want to get one working computer first. I'm going to try to power it through the contacts then make a more permanent solution like you did but I don't really understand what you actually did. I'll just clean them first then try to understand whats going on. Is basically what you did for the battery contact solution?
You must log in or register to reply here.
Share:
Facebook Twitter Reddit Pinterest Tumblr WhatsApp Email Share Link
Top