Well, this is just unfortunate

I was planning to do my great big grand reveal of a fashionably working AT&T 6300, all with it's original pristine MFM drive, the keyboard and the original installation of MS-DOS, but nooooooo, the CRT had to bust because of a shipping issue! Leaving the machine itself aside, I just had to find a working VGA card for the special doohickey it is with it's proprietary video board. And I made sure I did not fry anything by disabling both the onboard video jumper setting, and the W1 jumper that is present on the P8 video card.

So, to cut to the chase, nothing I try to shove in it works! I've tried the VGA Wonder XL card, I've tried the Speedstar 24X with the BIOS access jumper toggled as "8-bit", I even wasted green leaves on a Paradise VGA Plus 16 just to see if flipping all the switches down (which is recommended for getting these cards to work on an IBM XT) would make video show on the damn thing.

For every card I tried, it either locks up the machine on POST with nothing to show, or for the Speedstar, it just cheeses it by having the machine working but with no video to be shown at all. And I wonder...

...do these issues have any relations to how the mainboard simulates the 8088 BIU wrong? Something about wrong data being received and sent forcing the machine to lock up? All I can feel now is anger and rage building up from the machine at this point being nothing but a dud until I get the CRT fixed. Or can it just be simply a jumper issue with ROM not being mapped in the correct spot? I can post the mainboard jumpers if any of you would like to see...

By the way: the special CRT's also a color CRT, so I really have to be careful with these things!

The trick to getting a VGA card to work is to disable the onboard one--on mine, it was done by pulling a socketed PAL. Set the motherboard switches to "none" for display and use a decent 9-bit capable VGA card. I think I used a Tsenglabs 4000-based one.

Do you want to buy a whole new (non-working) 6300? I have the monitor (amber I think), keyboard and system itself and I think all it needs is a working PSU (or the one in there fixed).

No thanks on the CRT offers, all it just needs I think is a capacitor soldered on. When I turn on the CRT, it flashes green for a second, then the light turns off; The CRT then makes a whining noise. Jiggling the thing around, it looks like a small part has fallen off, not too big, maybe part of the flyback? If it's totally capable of reassembly, and the circuit boards haven't broke, I'll be fine.

Meanwhile, I'm still investigating why the Paradise VGA Plus 16 will just never work-- I've tried it in every different slot, but not WITHOUT the MFM card inserted; could it perhaps be mapping itself into a conflicting space with the MFM option ROM? I've also seen comments that the 14.318MHz oscillator circuit works differently on this machine, and therefore cards like early Sound Blasters would require some little hackarounds and wiremods, although that claim mainly comes from Lord_Nightmare himself. Going to reinstate the point that the "display" switch on the mainboard is set off, and the P8 video card is jumpered to be disabled. There's also a "scroll speed" jumper which some Olivetti manuals call it "nonstandard video card", oddly enough.
Last edited: Sep 15, 2017

Well, I'm all out of ideas for now while I prepare for opening the CRT, the Paradise VGA Plus 16 still shows nothing with the correct switches, nor a post screen when the WD1002 is removed. Onboard video is still disabled, of course. There's apparently POST debug output that is sent through the parallel port, but you have to get a LED reader to read the codes. Seems like it's just simple character output though, is there a program (any OS is fine) that lets you easily read these without such a board?

Victory at last... to be continued

Victory at last... to be continued 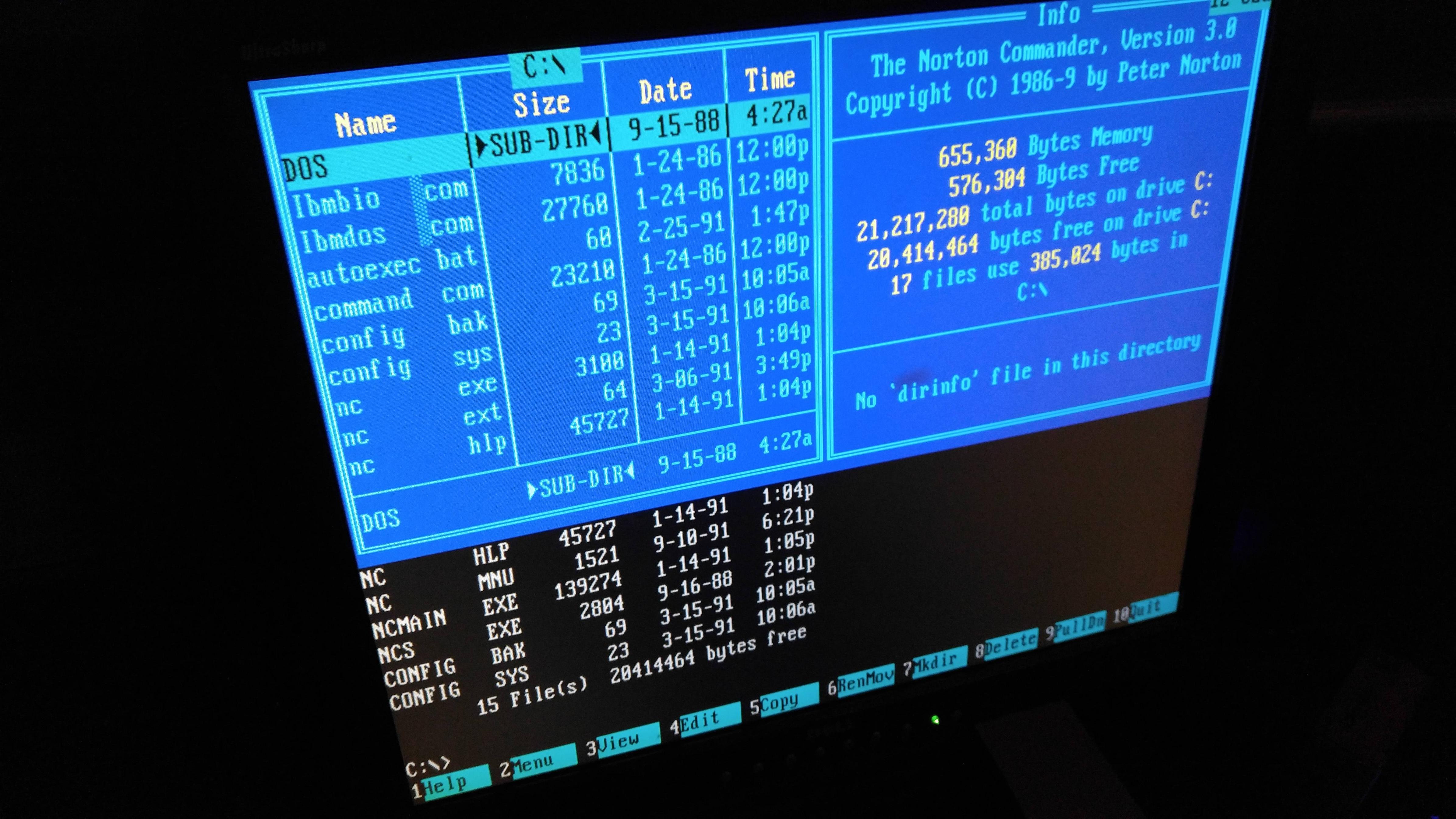 Unfortunately, the drive is either dirty, actually 1.2M, or the disk drive jumpers are set wrong. DOS refuses to read my 360K formatted disk, which is just a tiny MS-DOS 6.22 disk in it. The BIOS also marks drive A as "Not Ready" too. Anyone know how to maneuver the drive bays on this thing without breaking any vital parts?

Could also be a mistaken drive select jumper.
B

Kazblox said:
Anyone know how to maneuver the drive bays on this thing without breaking any vital parts?
Click to expand...

Look under the bottom drive from the front, there is a bendy piece of metal running from left to right. You need to put a screwdriver in there and push down on it, and the whole lot will slide forward. 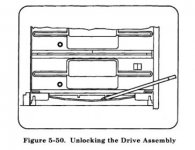 Thanks. As we are currently speaking, I'm installing my CT1350B into this machine right now. Looks to pass the power up test without a hitch.

So, bad drive it is! The drive that I got from eBay, the Shugart SA-455, works fine here! Looks like I'll have to do some good cleaning on the other drive to get it to work... But for now, the Shugart stays. Be on the look out as I post further updates in a newer thread, once I get the HDD plate and the case assembled back together in an orderly fashion.

Aaargh, the drive assembly won't lock in now! I correctly assembled the metal plate that goes along with that "bendy metal" or whatever bobba84 calls it. While it slides in, it still can be moved outwards without even trying. Anyone have a picture of what the assembly is supposed to look like locked in?
B

The trick is those shiny silver bits in the rails about half way back. If they are bent down it doesn't hold it in. You can see my (left) one is a bit bent. Check the part at the front you pushed down to release it isn't bent too far down either. 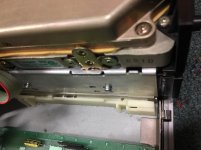 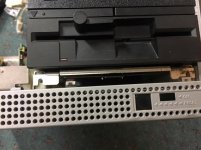 I see that the protruding silver in the middle of the rail plate is supposed to be behind the bendy metal.... However, the farthest I can get through it is when it stays on the top of the metal...

EDIT: I can also see that the silver bit in the middle of the left plastic rail is extremely bent down. Zoinks!
Last edited: Oct 13, 2017
B

From memory I think I had to push the bendy metal back down to get it to go further, and it took quite a hard press on the front of the drive to make it go all the way. But I don't want you to break it! So maybe take it back out remove the bottom plate form the drive, and try with that by itself... and see if you can see what's going on?

Kazblox said:
I see that the protruding silver in the middle of the rail plate is supposed to be behind the bendy metal.... However, the farthest I can get through it is when it stays on the top of the metal...

EDIT: I can also see that the silver bit in the middle of the left plastic rail is extremely bent down. Zoinks!
Click to expand...

Rather than guessing, have you downloaded the service manual and other documentation for the 6300? Some of these issues, like removing the floppy drive cage, are covered...

Happy to see you've got it working. Make sure to clip that battery off of the motherboard!

OK, cage issues solved. All I had to do was to apply..... firm pressure. The cage plate somehow didn't want to snap in when I was jamming it with hard force, or I was either lucky.


Trixter said:
Rather than guessing, have you downloaded the service manual and other documentation for the 6300? Some of these issues, like removing the floppy drive cage, are covered...

Happy to see you've got it working. Make sure to clip that battery off of the motherboard!
Click to expand...

I knew it from the Service Manual in the beginning, but forgot that specific part somehow before bobba84 posted the same excerpt from the book. And yes, I did remove the battery on first sight! It already corroded, but nothing looked damaged. Looking to solder a new rechargeable 3V holder onto the thing soon! Hard disk looks like it's having some serious trouble after doing a short power-on test, so I'm going to do some Spinrite on this thing...