Who knows this Model II interface board.

I have an unknown interface board in my Model II.
The print on the board is: 1981 progressive computer products HA-2a

Does anybody know what it is and have some documentation about it.
Any help would be very appreciated. 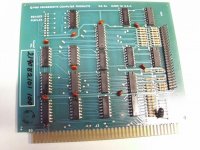 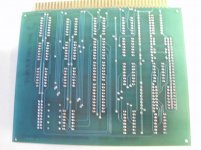 I've never seen that. It seems a somewhat odd shape for a model II board too... How does it lock into the frame, just the big anchor across the top?


Hans01 said:
I have an unknown interface board in my Model II.
The print on the board is: 1981 progressive computer products HA-2a

Does anybody know what it is and have some documentation about it.
Any help would be very appreciated.

Just noting the positions of the pullup/termination resistors relative to the 50-position header, this appears to be a SASI interface board.
1981 is too early for SCSI.
L

1981 is prior to the availability of the Bernoulli for the 16 as well. The Bernoulli interface was a modified DRAFT SCSI interface, definitely not SASI though. The 8.4MB 8 inch hard disk drives for the model II had a 'SASI-ish' interface completely different from the later 5.25 inch hard disks, but that board has a Z80CTC on it.

Your board resembles the documented Bernoulli interface board:

But it could be a simple parallel interface; the photos don't give much idea of what chips are used, to see what the card might do.

Just as a guess, the letters 'HA' could very well mean 'Host Adapter' with the '2' representing the Model II and the 'a' representing a revision. But googling for the logical strings only turns up this thread.
Last edited: Jan 9, 2015

It's clearly a SASI interface, which had been around since 1979. SA1000 controller document. Look at the bottom of the board; you can clearly see the 8 data lines at pins 2,4,6,8,10,12,14 and then, sneaking around the outside, the parity bit at pin 16, then a lot of nothing, then the usual status and handshaking bits at the high end of the connector.

I've got a similar early board from Ampex for the IBM PC. Just a bunch of SSI TTL, nothing more. I suspect that you might even be able to rig up a SASI interface using nothing more than a bidirectional PC printer port.

FWIW, this also fits in with the only other PCP card that I'm aware of--a floppy controller for the Model III.
H

Thank you all for the response, it is a pity that it is not a harddisk interface.

>> How does it lock into the frame
Just like the other boards, only a little shorter, it is floating in the card cage.

>> But it could be a simple parallel interface; the photos don't give much idea of what chips are used,
Most of the text on the chips is removed, it looks like TTL

Have you seen the unpopulated connector in the top left corner with the text: Remote Display
Could it be a scanner or printer interface ?

"Progressive Computer Products" and "Micro Mainframe" were aliases for the same company. They apparently always used the Micro name in ads, but printed only the Progressive name on their boards (just to be annoying, I guess). Fortunately, they ran at least one ad with a photo of a board, on which you can read the Progressive name. See the FDC-IIIc photo in the ad on page 379 of the November 1982 issue of 80 Microcomputing.
https://archive.org/stream/80-micro...2-11/80Microcomputing_1182#page/n378/mode/1up

By the way, that FDC-IIIc board is a Model III controller for both 5.25" and 8" floppy drives, which is exactly what you wanted in the other thread, and its use with LDOS is documented in the July 1983 LDOS Quarterly. http://tim-mann.org/trs80/doc/ldosq2-3.txt

Hans, it is a hard disk interface, roughly speaking. You simply need to find a hard disk with a SASI-interface controller. I assume that you don't have the software for it, so it's not terribly useful as-is.

I think the "remote display" is probably little more than a group of LEDs that indicate the operation of the interface. The IC next to the pads should be some sort of open-collector (e.g. 7438 ) device. I can't make out any of the IC part numbers on the photo.

Chuck(G) said:
I can't make out any of the IC part numbers on the photo.
Click to expand...

I don't think there are any part numbers. Even the IC id codes are all labelled "1". Looks like an attempt at obfuscation by the component manufacturer.
L

Part number obfuscation is an old trick; HP in particular is real fond of doing this with their test equipment's IC's.

Anyway, looking at archive.org's copy of the January 1982 80Micro, page 337, very little is mentioned about details, but two sentences do get my attention:

When a new drive becomes available, you need only to purchase that drive and controller to upgrade your system. The software and Host Adapter works with the new drive package, thus allowing minimum upgrade cost.
Click to expand...

A SASI HA plus something like a Xebec 104526 would allow use of ST506 drives with this HA, if you had the driver. Won't work with a FreHD or LoTech IDE, though.

On the other hand, there are some of the controllers, such as the OMTI 7000 and 3000 series, as well as the WD1002-SHD should work a treat with their ST506 interface on this board. There's probably a corresponding Xebec controller as well; I haven't checked.