Today, I encountered my second 430nx based board, and it had the exact same issue as the 1st board I had tried to get going about two years ago.

Basically, it seems when the Dallas RTC's die on these boards, replacement does not work.

The first board was a Packard Bell LPX board, after replacing the dead Dallas chip with a Glitch 12887, It would refuse to actually save bios information, and on each reboot, the data on the chip would become corrupted (odd dates and times showing in BIOS, settings changing automatically, etc). Trying a brand new NOS 12887 had the same issue. Replacing the original dead chip would stop these errors from occurring, but obviously no data was saved. I attempted to battery mod that chip but had a slip of the hand with my dremel, broke it beyond repair, and that board became a paperweight.

Yesterday, I finally got a CPU that would work in my NOS Micronics M51PI mainboard, also using the 430NX. Upon first powerup, it complained of a dead battery. It's socketed, so I threw a Glitch 12887 in there, and it exhibited the exact same symptoms as the 1st board. Identical failure. Replacing its original dallas, gives the same "fix" to the data, but no ability to save through power cycle. I am planning on trying to battery mod the original Dallas, and be a bit more careful on this go around.

Doing some reading, I found several threads of people with 430nx boards having the same problem after their Dallas dies. I found a few references to certain boards requiring the Dallas to be pre-formatted in some way, but no details in what that entails, or how to perform this procedure (if it's even possible for a home user)

So, I'm wondering if anyone else has had this issue with the 430nx boards, and does anyone have any details on how to preformat these new RTCs to make them play nice with this chipset. Is there a reader I can plug the Dallas into to dump the data in the flash, and then upload that to the Glitch?

Thanks in advance!
T

I have a system with a 430nx-based mainboard as well. It had, of course, the same issue. I simply put the jumper for CMOS reset in place and left it like that. Works fine for me. It always starts with the BIOS' default settings and does not complain. Clock is not affected for whatever reason (though it freezes when you power-off the system). As long as there are no settings you need to change from the default ones, that's what I would recommend.
Z

If anyone happens to have a 430NX based board that still has a functioning OG Dallas, if you could pull that and read it on a TL866II, that would be GREAT lol.

One of the reasons that I prefer a rework on the Dallas RTC modules rather than a replacement. Reworks aren't very difficult.
T

Chuck(G) said:
One of the reasons that I prefer a rework on the Dallas RTC modules rather than a replacement. Reworks aren't very difficult.
Click to expand...

That would not help in this case, as the problem occurs once the battery is flat. What you do after that (replace or rework) has no influence on the outcome.

That makes no sense at all. Obviously, when new, the board worked from nothing.
Never had a 430NX board--HX and TX, yes with no problems.

Thinking about it a bit, I wonder if there's something that was set in the original RTC memory that the BIOS is picky about. If anyone has a working NX board, it might be useful to get a dump of the registers and memory of the chip.
Last edited: Oct 14, 2021
T

As he already said:

I found several threads of people with 430nx boards having the same problem after their Dallas dies. I found a few references to certain boards requiring the Dallas to be pre-formatted in some way,
Click to expand...

NX was strange. It has some other issues, especially with the reference BIOS from Intel (e.g. it won't let you enter the BIOS with wrong date/time - you need to boot into DOS first and set them to something valid).
Z

I'm still looking for anyone who might have a 430nx with an intact RTC battery :D
I

I recently picked up a Dell Dimension XPS P90, made in 1994, which uses an Intel Premiere/PCI II motherboard (1.00.xx.AX1J). This is an Intel reference board that was also used by Gateway, among others (with ID 1.00.xx.AX1), for early Socket 5 systems on the NX chipset. It's actually a nice motherboard, very well done. Except for this issue with swapping out the Dallas RTC, and the fact that the factory RTC is soldered! You can in fact make the new Dallas chip work with the NX boards.

I had major issues with a new Dallas 12887a, manufactured in 2022. Garbled text in the BIOS, couldn't see the HDD, etc. The problem isn't a pre-load of the RTC module memory at the factory beyond BIOS routines (this would be logistically a mess). Rather, the problem is the OG Intel BIOS for this platform dating back to 1992 - specifically with a timestamp of 11/11/1992, version string 1.00.13.AX1J. Yep, Dell was using the original Intel Pentium/PCI BIOS on a system made near the end of 1994! This BIOS doesn't even implement plug and play correctly. There is a much newer version of the BIOS for these Intel reference boards dated 09/08/1995, version string 1.00.16.AX1J. It has an image title of "Apache Release 16.0". Dell states that this BIOS correctly enables plug and play, and changes the PCI base IRQ to 11.

Flashing the system to the newest available BIOS fixed the issues with accepting the new Dallas RTC. The system correctly realized the contents of non-volatile RAM was invalid, and reset it. On the old BIOS, it would not do this even with the reset jumper set. I am able to set all settings, and they are retained. There is no garbled text in the BIOS anymore.

If you are using an 12887a, you must fold over the extra new pin, which if connected will be setting your chip to an eternal reset state

Get manual, bios and more for the Premiere/PCI II BABY-AT (Plato)!
www.ultimateretro.net

It is said that the Premiere/PCI II is very similar to the earlier Intel "Batman" board, which is also a trouble board with the NX chipset.

tl;dr the old original BIOS for the NX platform has some bugs, and flashing to the most current will fix this issue. The newer RTC modules have more memory and it is throwing the buggy old BIOS for a loop

Hope this helps!
I

Well, if only it were so easy! Well, it is, but with a catch. Turns out that the Dell S45 BIOS has it's own issues. I just could not get the system to boot off of any IDE disk consistently with it. So I downgraded back to the original OEM BIOS and guess what? The new Dallas chip is fine! S45 must have added some routines in there to program the new Dallas chip correctly that was missing in earlier BIOS versions. If you have any PnP cards with config memory you should pull them out when bouncing between these BIOS versions. What ends up happening is when the system PCI base IRQ changes to 11, it shifts everything around. Then you get conflicts going back, which have to be cleared manually. The Dell XPS P75 with the Intel 430NX chipset is now happily running Win95.

Was thinking about this in back of my head, didn't these motherboards use a tag ram chip? Could it be possible the style of chip used is stored in cmos memory and that's why once the battery goes flat, the system is dead as a brick? Maybe its looking for the reference version of tag ram, like used on legit Intel boards?

I know some vendors cheaped out the tag ram in FX series and even HX / TX boards ( only allowing 64mb cachable memory), wouldn't surprise me if they did with NX as well. Without a proper tag ram chip, the system would never post. Could be red herring, but worth investigation in my opinion.
G

twolazy said:
Was thinking about this in back of my head, didn't these motherboards use a tag ram chip? Could it be possible the style of chip used is stored in cmos memory and that's why once the battery goes flat, the system is dead as a brick? Maybe its looking for the reference version of tag ram, like used on legit Intel boards?

I know some vendors cheaped out the tag ram in FX series and even HX / TX boards ( only allowing 64mb cachable memory), wouldn't surprise me if they did with NX as well. Without a proper tag ram chip, the system would never post. Could be red herring, but worth investigation in my opinion.
Click to expand...

TAG SRAM is used to cache memory addresses in system memory for faster CPU lookups in main memory. It has nothing to do with the BIOS.

Yes but try to get the system to boot with no tag ram. I know some earlier pentium boards will in fact, not boot, without it.

Here are some of the most common faulty RAM symptoms that you might come across.
Now hear me out, if the tag ram is misconfigured or faulty, it will cause the cache to not work. On some boards, a bad tag ram chip or improperly setup tag ram could cause ram issues if the board is not setup to fall back to not loading the cache. Look at #3. Has anyone tried removing it and seeing if the board would boot or at least throw a beep code? I have a dell 486 (micronics board) that refused to even boot till I pulled the cache, then the tag ram. Then she fired right up. Just an idea...

Also do any of you own a PCI or PCI & ISA system analyzer? Love to know if it shows any life whatsoever on one. If you don't and plan to buy one, be careful with the combo isa ones. Alot of them the ISA side is broken and can cause the board to short out. I made that mistake with a el cheapo ebay one, first one I bought, and learned the hard way the ISA edge is too small by a pin and was shorting out a board I was working on. 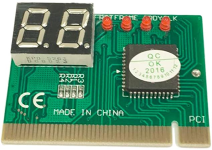 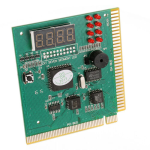