I didn't recognise the drives - I've always seen Tandon drives in the 5150s.

There's a pair of these things in this 5150, and by the looks of the screws and everyting else, they've been in there from day one.
Has anyone seen these before?
Does anone know who made these drives? (I can't find anything other than IBM's sticker on them). 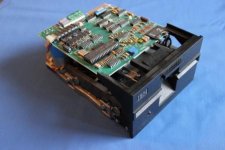 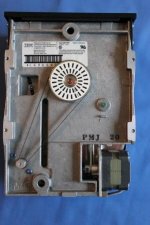 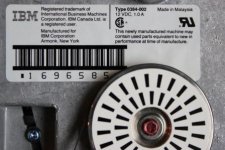 I thought IBM subbed everything out when they made the PC, so that's the bit that gets me - the sticker says "Manufactured for IBM" while the Tandons had their own stickers on them.
It wouldn't surprise me though - there's a lot more beef in this drive, than the Tandon TM100's (like twice the beef).
It seems much beter made - more moving parts mind you, but mostly for clamping the disk down where it's supposed to be, instead of just relying on a spindle hub.

I took it apart for cleaning, and this is the only other sticker I see on it, other than the IBM sticker on the bottom.
Does anyone recognise DMC or that DMC logo? 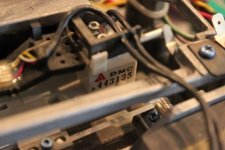 Given the country of origin and the time, I'd say the OEM was Alps. They had a huge floppy drive manufacturing operation in Malaysia in the 80s.

Just a guess, mind you.
L

Chuck(G) said:
Given the country of origin and the time, I'd say the OEM was Alps. They had a huge floppy drive manufacturing operation in Malaysia in the 80s.

That would be another one of your good guesses, Chuck.

Just for fun, I checked with Mark Farris on whether or not it was an Alps, and he said:

"I do believe you are correct. This is the standard IBM 360K Full height drive that was manufactured by Alps."

Luckily they check out fine for alignment, read/write tests, etc because I can't find anything online about them.
Too bad too, as they look like a very well made drive (ie: a whole lot better than the Tandon TM100's).
B