Eudimorphodon said:
Ultimately I think Commodore kind of missed the mark in terms of what "computer" evolved to mean among the public at large, but as an embodiment of what people might have dreamed of in the mid-1960's as the sort of "personal computer" they might actually be able to afford by 1980 the PET feels absolutely spot-on. It's very retro-futuristic.
Click to expand...

One other vintage computer (but it is a Terminal) that has that retro-futuristic look is the Lear Siegler ADM-3. It is a shame that it was not a fully fledged computer because that also had that "look" which is kind of iconic and almost timeless, like the PET. Somehow, these things still manage to look amazing more than 40 years later, despite the changes in industrial design and fashions. Off the top of my head, there are a couple of other things that spring to mind, like the Concorde, which looks like a futuristic interstellar space ship, or say, the E-type Jaguar, which if released today, as a new product that nobody had seen before, would still be a smash hit.

The other day I was watching the vintage movie "The Swarm" it has Michael Caine in it, Richard Chamberlain & other famous actors, 1978. I am sure I saw somebody typing Data into a blue colored ADM-3 or very similar terminal, in the military bunker. Actually looking at the images, it may have been the ADM-2.

PS: I don't think the the PET had been invented when 2001 Space Odyssey came out in the late '60's, but something like its design would have looked good in the film. We have to settle for the H(I)A(B)L(M)-9000 from IBM, but not really, but its fun to suggest it. It makes me wonder why Commodore used "2001" perhaps after the film, to make the computer sound futuristic.
Last edited: Feb 15, 2022

The chicklet PET was the first ever computer I encountered.

Still remember the classroom at school it that in and being shown how the program worked. First time I was introduced to the concept of 'strings'

Hooked from that moment.

Hugo Holden said:
I don't think the the PET had been invented when 2001 Space Odyssey came out in the late '60's
Click to expand...

Certainly, it was almost a decade too late, but it's aesthetic (and almost certainly the "2001" name) were pretty clearly inspired by that school of modernist design. Also wouldn't surprise me if whoever designed the "calculator" PET had encountered one of Friden's early CRT electronic calculators earlier in their career.

(It's pretty funny to compare the inside of a PET to the guts of a Friden EC-130, actually; they're physically about the same size but a PET is practically empty while the calculator is utterly packed. Less than 15 years separate them but the PET could be from another galaxy.)
H

Eudimorphodon said:
Certainly, it was almost a decade too late, but it's aesthetic (and almost certainly the "2001" name) were pretty clearly inspired by that school of modernist design. Also wouldn't surprise me if whoever designed the "calculator" PET had encountered one of Friden's early CRT electronic calculators earlier in their career.

(It's pretty funny to compare the inside of a PET to the guts of a Friden EC-130, actually; they're physically about the same size but a PET is practically empty while the calculator is utterly packed. Less than 15 years separate them but the PET could be from another galaxy.)
Click to expand...

What is a "calculator" PET, is this an actual machine ?

I saw there was a calculator program for the pet (presumably on a tape originally)..have you ever tried one ?

Hugo Holden said:
What is a "calculator" PET, is this an actual machine ?
Click to expand...

The original "Calculator Keyboard", aka "Chicklet" PET, IE, this one: 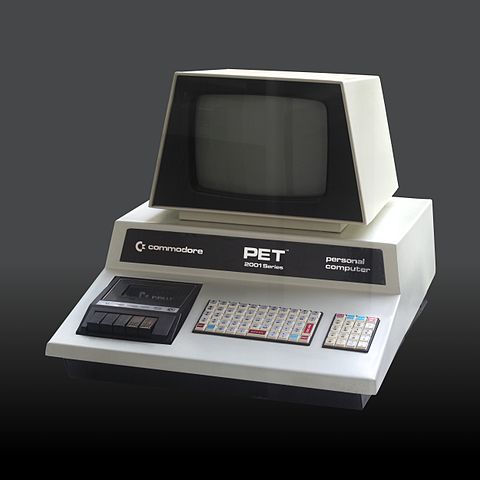 I got the new main power supply filter capacitor and fitted it to the PET. It looks the part in there. See Photos, it is a very nice new replacement capacitor.

Also, as I mentioned, in my PET VDU it has the early pcb and the MW24-302GH, green CRT. But the LOPT it has only generates about 30 to 35V for the CRT's negative bias, but this CRT needs about 46V to cut off the beam, or at least get it to a very low brightness, when the cathode voltage is zero with text & graphics displayed. This higher value was also shown on a later Commodore schematic with this particular CRT. So on my VDU, with the brightness control at min brightness, it was still too bright and I could not turn it down to a suitable level I liked.

The turns per volt on a LOPT are in the region of one turn per volt, so all I did to remedy this problem was to add a 9 turn coil around the LOPT core and place that in series with the winding which feeds the diode for the negative supply. I don't like doing things like cutting pcb tracks etc, so I used a "trick" which is a reversible method of adding a component in series on a pcb. It works particularly well for parts with stiff pins, such as the ones on the LOPT and when the pin is moderately smaller than the pcb holes. The pad is de-soldered, and then thin Teflon insulation is slipped over the pin to make sure it cannot connect to the pad. And in this case the two wires from the 9T coil can be soldered to the pin & the pad. This way the modification is reversible if required without any harm. Though it did require a small 2.5mm dia hole in the pcb to allow the two Teflon covered wires to pass through beside the LOPT.

"Gutsy is as gutsy does! " Quote from Napoleon I think...
H

"Gutsy is as gutsy does! " Quote from Napoleon I think...
Click to expand...

That sounds very much like Forrest Gump, maybe he borrowed it from Napoleon; Stupid is as stupid does:

Stupid Is As Stupid Does

In the movie, Forrest Gump, the main character was asked several times if he was stupid. Forrest Gump replied "Stupid is as stupid does", meaning…

But from that movie, I certainly agree; "Life is like a box of chocolates, you never know what you are going to get"
G

I once owned three of the same model PET, along with at least two aftermarket (non-Commodore) compatible and fully functional disk drives. I was working at Flinders University at the time and the lot was being thrown out along with an assortment of other junk. I literally backed my station wagon up next to the skip and grabbed them off the trolley.

All three PETs were initially working, but all three failed after an hour or so of use. IIRC I got either a blank screen or a cursor unresponsive to any keyboard input. This was around about the year 1999 or 2000. I remember all three main boards had a severe case of copper delamination and blistering. I was still living at home back then and the PETs, along with a lot of other stuff, was seriously cluttering up by bedroom. I was eventually forced to rationalise and given their non-functional status, the PETs got drawn the short straw. These computers were worth less than zero back then. I mean, even technical people would scornfully ask what I was saving and playing around with "that junk" for. With not much hope of even giving them away I was left to break them down over a period of a several weeks, stuffing as much as would fit into the bin on pick-up day.
You must log in or register to reply here.
Share:
Facebook Twitter Reddit Pinterest Tumblr WhatsApp Email Share Link
Top