Did a few repairs on my newly-acquired Kaypro II today.

First repair was resoldering the connector on the power supply, as the joints were all cracked and broken on it, resulting in intermittent issues. 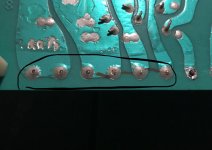 I had actually already sucked the solder off of a few when I took this picture, but I outlined the ones that were still untouched, which is what they all looked like. 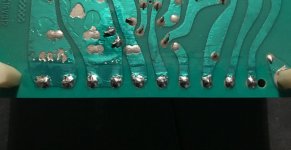 Much better! All intermittent problems have also vanished!

Second was the latch on the A: drive. These Tandon drives are kind of notorious for this problem, and this one was no exception. When I went to go take the disk out last night, it gave up on life. Thankfully I had a spare non-working drive that was similar, so I took the necessary parts from that, and was able to successfully repair the Kaypro's drive!

It's a bit tough to get the drives out of a Kaypro II, as there's not much clearance between the left side screws and the CRT. I ended up having to use vice grips to remove the screws on that side, since I didn't have a screwdriver that was short enough. That actually worked out surprisingly well, which is good, because I did NOT feel like removing the entire CRT.

Here's some shots of it all back together and working 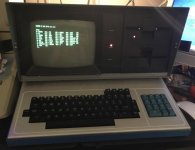 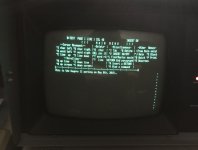 I sure do like this thing. I'm really digging CP/M also! The games made entirely out of ASCII characters are also super fun

This machine was definitely not made for games, which is one of the things I love about it. I like things that people got serious work done with in the past, and the Kaypro is exactly that. In other words, this machine was no "toy" when it was new.

Heh. You had exactly the same experience I did when I bought a Kaypro II.

It's the part of the latch that holds the pin that cracks and breaks. I have two drives like that. On the other hand, there are people who have drawn up 3D models of this part and there is a discussion about it here, if you are interested:

Kaypro looks good. Particularly the keyboard - the pin stripes round the bottom are often worn through long usage. Well done on the repair!
L

There are a couple of things you will need do to prevent the other Floppy Hinge part from breaking. Pick up a length
of 3/32 Brass Rod and 1/8" brass Rod. Cut those to make full length parts for the door hinge. Remove the two short
white Nylon pins, and replace those with the 3/32" Brass Rod. The 1/8" brass is used in the larger holes to make a
Door Hinge that will last for years. (Here is my Latch Part I put on Thingiverse.)

If the Floppy's need lubricant on the Head Guide Rods, use Dri-Slide, a Motorcycle Cable Lubricant, that does not
attract dirt and makes the heads glide for years. It only takes a couple of drops, so a can will be a lifetime supply.

Thanks for replying everyone!

KC9UDX, so your Kaypro had these exact problems? Interesting indeed! Guess these are fairly common problems for these machines.


JonB, the 3D printed parts are very interesting! Definitely good to know those exist. And yes, the keyboard is in very nice shape, and I also got lucky since this one uses more standard mechanical switches instead of the Keytronic ones which use foam pads that rot.


Idkraemer, some very good info there! I’ve thought about a GOTEK, but I sure do like real floppies. Still considering it though.

Yes, I had exactly the same problems.

I had the same problem on two kaypro 4/84's. Someone coating the power supply pins in solder making the connection to tight and when the connector was pushed on it caused breaks in the solder like yours. Easy fix, and I sucked off all the extra solder. Wonder why its so common on the kaypros.

VERAULT said:
I had the same problem on two kaypro 4/84's. Someone coating the power supply pins in solder making the connection to tight and when the connector was pushed on it caused breaks in the solder like yours. Easy fix, and I sucked off all the extra solder. Wonder why its so common on the kaypros.
Click to expand...

Not really sure about that. May have something to do with the fact that it’s a single-sided board, so there’s not as much support (solder) as there would be on a double-sided board.

Well, if you saw my other thread, you’ll know that my B: drive was missing the felt pressure pad! I believe I have fixed the problem though. I’ve got a new piece of felt glued in there, and so far, so good.

By the way, here's what I'm using to write disks for the Kaypro: 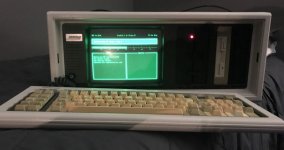 My trusty Compaq Portable. I download the files on a modern computer, put them on a 720KB disk, put that in the Compaq, write the files to a Kaypro formatted 5.25" floppy and put that into the Kaypro 720KB goes a long way with Kaypro files.

One of the things that worried me in the past about buying a Kaypro was how to get software for it. I sure felt dumb when I looked it up and realized how easy it really was!

Tandon drives...hate the damn things. They're pretty much the only drives I ever seem to have irreconcilable issues with.

MrArgent said:
Tandon drives...hate the damn things. They're pretty much the only drives I ever seem to have irreconcilable issues with.
Click to expand...

Hah. Interestingly, I’ve got two IBM 5150s that have Tandon drives, and I’ve never had a single issue with them.

I was pretty determined to fix these, because they look really good in the Kaypro.

Yeah, they're integral to the looks of a lot of machines unfortunately. My only working one is a TM-100-1, which my 5150 and XT share as needed. (They've sort of fallen to the wayside in light of this being an ongoing issue and my Apple II getting most of my attention for the time being.) Got a pile of five parts drives I'm hoping to get looked at sometime in the near future...

Some of the very last 5150s made use a Magnetic Peripherals drive that looks identical from the front, and I think they are more reliable. That’s what my 1986 IBM 5150 has in it, and it also has the same 130W PSU that the XT uses.
L

all chips are socket'd so can replace them easy.. 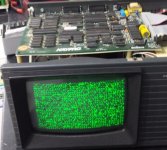 My first guess would be that the ROM is bad, so nothing clears the "random power-on garbage" from the video RAM. Or else something is preventing the CPU from running the code in ROM.
L

it seems that it was one of the 6164 rams.. as it now boots to a good screen but i think the FDD drive is playing up so need to take out and clean as it says , cant find any system files on a system boot disk, and the hdd does not boot.. it maybe blank and then all this happened to the last person who had it and they gave up...

I'd say the first thing - get the board out and press on every chip in every socket on each side alternatively so that you hear a satisfying squeak. That should restore all connections.

In general this rubbish means that you CPU is not starting at all, the first thing to check (if reseating chips would not help) would be main clock on cpu. I've got rubbish like yours on my clock modded KII in case when CPU was not getting any clock.

all chips are socket'd so can replace them easy..

Awesome you fixed it! I’d love to have a Kaypro 10 someday.
L