I assume I need only the actual key (it's early, not totally sure). Can anyone provide a replacement? 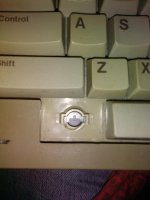 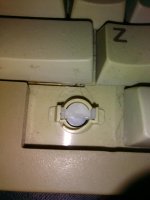 Ok shined a light on it, clearly the plunger is missing a piece, duh, so I guess I'd need that too.

I tried, sort of, to pop a different key off, didn't happen, and I'm askeered I'll break another one. Need a puller. It should just pop off, no?

good luck, i gave up after months of no replies and bit the bullet and bought one.
R

Before you put a new key on there you need to take all the other keys off and clean that nasty board! Yuck.

Plastic gets brittle. When I had a 520ST, I pulled all of the keys off to install "booster springs". Now, of course, the plastic has deteriorated and could well break.

Yeah, you can easily 3d print a new plunger but I don't see anyone that has already created that model for the ST, so you'd pretty much have to remove one and model a new one. The problem of course is the key, which isn't really a good 3d printable part (you could but it would look super ghetto). Like Verault, in every case where I've been missing a key, i eventually broke down and bought a new key. For broken plungers, i've 3d printed new plungers (originally for my Apple iie) but even those were eventually replaced with original plungers because I didn't like the feel of the 3d printed version (I don't have the best 3d printer). But generally, plungers are the perfect use for a 3d printer and the route we'll all have to take when parts run out.

That's the Alternate key, and it looks like this eBay listing has one available:

That listing appears to be just for the key cap, but you can buy the plunger separately:

Yeah, you can, but he also said in his post that he wasn't going to pay $10 for an individual key cap, so I'm assuming it's that auction he was referring to. That said, there aren't really any other options.

I might have one. I have a keyboard thats damaged at the other end, but being in the UK postage is likely to be several $....
.
6