Could somebody help me with identification of Osborne 1 unit ?
Nothing interesting on technical label behind.

All other Osborne 1 computers on ebay has different keyboard cables - mostly spiral.
Mine has flat tape but this looks like original design. No hole in the keyboard to hide spiral cable like in other machines, 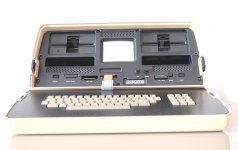 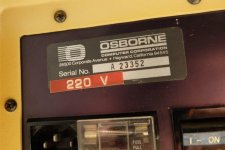 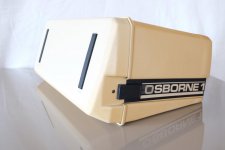 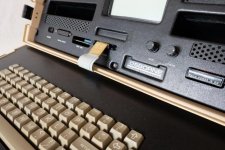 OCC went through a couple of versions of the case tooling for the O1. The first (prototype) version was all right angles, flat, featureless: 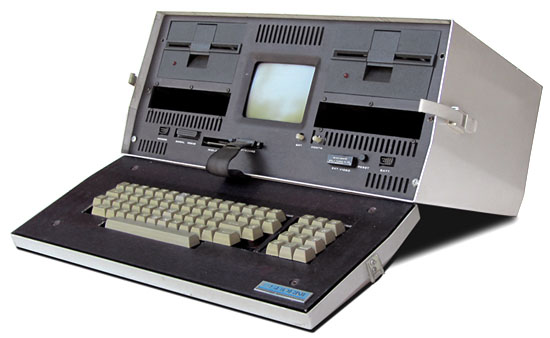 "Prototype" is a loose term. The first time I saw an O1, it was just a bunch of components spread out on a tabletop at Sorcim in Santa Clara. I wasn't impressed with the tiny screen, but Richard Frank assured me that it was usable. This was before the product announcement.

Then there was the "middle" version, like yours, still pretty flat, but with rounded corners.

And then there was the "Star Wars" version--with lots of molded features and a keyboard well as well as a coiled keyboard cord, rather than a flat ribbon cable:

Like Chuck said, yours is the first production model. Usually called the tan case for obvious reasons. It was an extruded case and designed to be as light as possible. However, the lightness also wasn't very rugged so they redesigned the case to the blue and gray model.

Tan case is sometimes referred to as the O1 and the blue/gray case as the O1A.

Very minor differences between the 2 electronically. Shafts on the contrast and brightness were a bit different between the 2.

Interesting thing about the tan case keyboard. There was so much room under the actual keyboard mechanism many people put hinges on the keyboard and used the space underneath for more storage! A few minutes with a drill, 4-6 pop rivets and your were good to go!
You must log in or register to reply here.
Share:
Facebook Twitter Reddit Pinterest Tumblr WhatsApp Email Share Link
Top