There are various YT videos already of Altair playing Daisy... But:

I was reading (online) through some old magazines from early 1970s, and it had a "write in" section from readers. I came across a write-in from a certain Kurt Inman. The write-in (from Kurt) mentioned how he was 11 years old and had written a variety of programs and was about to put together an Altair. Cute story, hoped Kurt went on to do great things...

After some more browsing, I found an article about a year later from someone with this same name (Kurt Inman) of a simple program for an Altair. I can't say for sure if it's the same person, but I'd like to imagine this now 12-year old had submitted a full article to a magazine.

Since I've never actually used an Altair before, I figured this would be a good excuse to try it out. I've written plenty of "guess my number" games in BASIC, but never in raw machine code.

Is there an Altair simulator that will emulate playing audio on a radio? 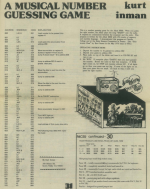 
Here is the code transcribed from the article, if anyone else wants to give it a go. And attached is a BIN file that the simulator above seems to support loading.

Cheers Kurt, wherever you are :D

The author is still active. Had worked for Borland so stayed fairly close to the childhood home.

I don't believe any emulator can produce the correct EM interference to be heard on a radio. Fortunately, every few years, someone rediscovers the concept so new people can experience the joyful sounds of jamming the airwaves even if the hardware is different.

krebizfan said:
The author is still active. Had worked for Borland so stayed fairly close to the childhood home.

I don't believe any emulator can produce the correct EM interference to be heard on a radio. Fortunately, every few years, someone rediscovers the concept so new people can experience the joyful sounds of jamming the airwaves even if the hardware is different.
Click to expand...

The Altair Clone was confirmed to still be able to play music over an AM radio a number of years ago, so to a degree it still works. -
V

Yes, but couldn’t this be emulated in software? I.e. the hardware effect causing this could be detected and the emulator emits an audio output? Of course rf waves and interference get difficult to simulate, maybe it doesn’t have to be that super high fidelity of a model.

Anyhow I was wondering how Kurt’s submission sounded (sequence of notes) compared to the more contemporary examples.

Oh, geez, the very top of your post you mentioned you already knew this. Sorry.....

The fact that music is being created at all is a total hack. You would have to break down exactly how each audible tone is being generated in the complimenting circuits which is very, very ambitious to say the least.
K

In theory, an emulator could trap the pattern of instructions making sound and play a similar sound through the sound card. Does seem like a lot of work for something that would get little use. But for systems like the Altair or TI-59 with few programs that made intentional AM radio sound, it wouldn't be impossible. The TRS-80 games which had more general purpose routines broadcasting AM radio would be that much more difficult.

The modern systems I have produce so much EM over the AM band that I doubt any program could generate a distinct signal over the background noise. Weirdly, the amount of interference seems to increase when the monitor is turned off.

One of the first programs I wrote for my "naked" Altair was, curiously, a music program. I took the coward's way out and soldered a capacitor to the "INTE" LED and fed it into an audio amplifier. Toggle the line using one-byte EI and DI instructions. All hand-toggled via the front panel.
D

Chuck(G) said:
One of the first programs I wrote for my "naked" Altair was, curiously, a music program. I took the coward's way out and soldered a capacitor to the "INTE" LED and fed it into an audio amplifier. Toggle the line using one-byte EI and DI instructions. All hand-toggled via the front panel.
Click to expand...

This is the way Processor Technology implemented their “Music System” which can provide three part (voice) output. You can see it working starting at about 3:00 into this video:

I recall friends being tormented by my phone calls with "Listen to this!"
I'll add that most of my mainframe co-workers were not impressed with the Altair; some thought it was a toy computer.
A

It's been sitting on a shelf in my shop for over 30 years, collecting dust. I doubt it it still works.
V

If one had "access" to a mainframe - that's far better (with over 10 years of software development of assemblers, editors, compilers, and "adv"). But personal computing was a kind of "cutting the coord" to not need to remote into a mainframe, and you get 100% use of your processor (I've read sometimes that remote comm wasn't reliable -- you'd get inconsistent performance either from whatever else users were doing on that mainframe, or dropped connection from flakey protocols; the exact same thing happens today - with "everyone" working remotely, but everyone complains how slow and unreliable the connection is {perhaps due also to extra encryption layers} - and yet, it all pays the same! ).

Sure, 256-byte to 4K is pretty limited, sort of "embedded application" only territory. But once you get up to 16K or more, it's enough resources to integrate together storage IO, full screen interaction, and some useful application in your software. I think that's ultimately why BASIC ended up so popular - it was essentially the smallest/simplest "language" that could be implemented in a 2K-4K ROM -- and once BASIC had PEEK/POKE, it sort of became an assembler of sorts (I'm not sure which was the first BASIC to add PEEK/POKE -- it's not present on the IBM 5100 BASIC nor the Wang BASIC, and not sure if any of the mainframe versions had it).

I do recall overlays and chains, so you could run a larger program on a very limited system -- dynamically loading different parts of the application (like say loading in the spell check component, at the cost of unloading the interactive editing component). But I don't think anyone pulled that off using cassette tape storage -- I mean, not the audio-recorder style tape decks. Tape systems like on the IBM 5100 were more formally defined, so its software could find a "file" on the tape and chain that in (the system ROM managed FWD/RWD of the high speed tape, to find the file).


For sure, we needed those "big computers" to help prototype (e.g. via emulators) and build the small ones. And "dp" (data processing) was the main focus then, as if it was the only thing anyone would ever use a computer for. Micros have led us to quad-copter drones - flyable computers :D But geez, at the cost of a lot of software-licensing litigation.

I recall that my buddies at Sorcim used at least three platforms to build SuperCalc--a little VAX 11/730, a Compupro S100 85/88-equipped box and an IBM 5160. Youse use the tools what you got. I was offered the VAX after Sorcim sold out to CA, but by then it was a slow and expensive-to-run system in comparison with what was available in the personal computer world--so I declined.
In the early days of my Altair box, I used a Novation modem to download code that I'd written and compiled on a CDC CYBER 74. I even wrote an emulator on the CYBER to check out my code before downloading it.
You must log in or register to reply here.
Share:
Facebook Twitter Reddit Pinterest Tumblr WhatsApp Email Share Link
Top