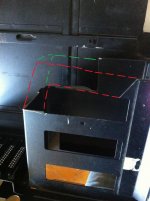 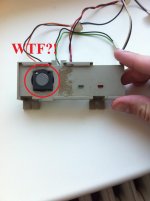 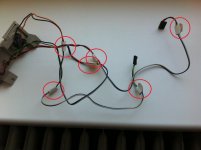 Lol, I made the exact same cuts in my 5170 case back in 1996 to fit a socket 7 motherboard. The drive cage interfered with the ram slots. In my defense, I was a broke kid and I got it for free...
S

Guessing it's a hand me down case that's been used for a few too many builds over the years.
Keylocks weren't terribly useful but a reset (or maybe turbo) button certainly would be
C

It only seems like butchery nowadays but back in the 90s these were not sought-after cases... quite the opposite!

Precisely. No one wanted them. They were totally worthless, unless you hacked them.

Guilty of using the Dremel on many old cases. As above, it was trash and you needed a case cos you were broke.
G

Just think though, without all that, your beautifully restored 51xx would be worthless today.

I plead guilty of cutting the bottom from the drive bezel on one of these so I could have space for 2 floppies and a tape drive. The cases weren't particularly valuable--and there were Taiwanese clones as well. I think a lot of people didn't like the idea of drive rails either.
J

I modified my NorthStar MDS Shugart floppy cover plate with two drilled holes to add (1) a toggle switch for write-protect mode and (2) to illuminate a big RED LED in a silverized LED holder, when in WRITE MODE. All the parts were from an extinct company called, "Radio Shack" .

I didn't want to mess with floppy protect tabs that sometimes fell off, so this rig allowed me to protect my floppies until I really wanted to write to the disk. Toggle UP and the RED LED lights to warn that WRITE MODE is available on the drive. When done, toggle DOWN and safe.
S

I especially like (not) using the electrical tape. I've seen several cases where use of this tape inside computer cases caused smoking (and almost a fire), either because the tape became loose, moved, or because wires got detached. The +5V / +12V power supply rails are usually powerful enough to make these thin wires go glowing red, melt/burn/evaporate insulation, etc. when these wires get shorted to the ground (case) or each other. If I need to connect two wires, I'd solder them together and use heat-shrink tubing to insulate the them.

If anyone remembers, this ol' guy sure got used to death, probably the only time a PC had been upgraded till it fell apart - I'm still planning to, at some point in my life, make reproductions of this case. I did every "sin" one could commit with power tools to it. I still miss it.

I've been looking to get my hands on another one (to keep stock) to move my 486 guts into for years, seems the well has dried up.
B

My pet hate is cable ties! The ziplock type. They pull so tight they ruin the cables, and you cause more damage getting them off.

I also am guilty of butchering a few old cases to make things fit (An Olivetti 286 I had got a 5.25 drive bay where there wasn't one)

Someone's using the wrong type of ties--the size must match the size of cable being tied. I like to use the small Panduit ties with the attached flags. This allows the insertion of the flag end into a convenient chassis hole. There's little problem getting them off a bundle--a small screwdriver will do it without damaging wires.

I've also used spiral-cut loom for cables when I want a lot of protection.

If you want a very neat look, there's always cable lacing using either waxed linen lacing twine or modern polyester stuff. It's still very much in use today and gives your wire bundles a very clean look. Tutorials abound on the web.
3

Haha I am also guilty of using sticky labels as insulation tape. In my defense I was around 13 years old at the time and like all teenagers I had very few dollars to my name. I do have to admit this actually lasted 20 years without shorting! Totally forgot I did it until I opened the PC up recently. 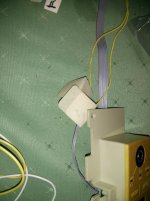 and yes I have since insulated it with heatshrink.
D

I think we've all done it in one way or another; I've done some serious ghetto stuff along the way... like instead of paying for ramsinks aftermarket for a Radeon 9500 pro, I made my own with a dremel, arctic silver epoxy and pre-1982 pennies.

Probably the worst thing I ever did was to a TRS-80 model III. Someone gave me some oddball two-thirds height 80 track DD drives, that were almost an exact fit in the model 3 case once I cut the part of the bezel between the two full-height drives out (where the logo/badge usually is), removed like a third of the copper framework internally and gave it four coats of black and two coats of lac. It looked good, but I still feel guilty about having done it on some level.

Next closest would probably have been some of the stuff I had done to my original coco back in the day, which had a slew of bat-handle toggle switches sticking out of it for things like inverse video, execution suspension, switching between RF and composite output, etc, etc... I had also made my own version of the multi-pack and cut the top off the case to have it just kind-of sitting there on top of it.

In a way though, I kind-of wish I had both rigs still instead of having pitched them in the early 90's just because they were unique examples of what we were really doing with the systems at the time.

I keep thinking on giving my current Coco 1 with it's cherry picked parts a similar treatment, then talk myself out of it. Maybe someday if I find one of the all-black plastic ones to sandblast and grain-finish as a starting point then I'll do it.
You must log in or register to reply here.
Share:
Facebook Twitter Reddit Pinterest Tumblr WhatsApp Email Share Link
Top