crock said:
The earliest badged 4032's had the dynamic board with no CRTC.
Click to expand...

I likewise have one of those machines badged 4032 but is technically just a PET 2001N (Dynamic RAM-no-CRTC) board with BASIC 4.0. All 12" machines (to my knowledge) used CRTCs but there were indeed 9" 4032s (and possibly 4016 and 4008s) and so far as I *know* no 9" machines shipped with the Universal board. There are however references to a special EDIT ROM to allow you to use a Universal board in a 9" chassis, presumably as a replacement service part.

(There's an official 4000-series PET service manual floating around that covers both 9" and 12" variants so they're definitely "canon".)

I remember (whatever that's worth) being able to buy a Universal board as a 4.0 upgrade for 2001/9" machines. Whether or not that's what C= actually sent out is another question.

My 2001N got an "upgrade" board, with a shiny sticker from C= announcing it as such, which is just a Dynamic board. I don't know the history of the machine to know who upgraded it or how.

My 2001-8, no N (IE, Chicklet), has a "REFURBISHED" sticker on the back and inside it had a Dynamic board instead of a static board with BASIC 2.0, one bank of 4108 DRAMs (I had no idea such an animal existed before seeing them in the flesh, I always assumed that 8k PETs, if they came with DRAM, used two banks of 4k chips) and a couple holes punched through the socket area of the other bank. (It's now a "2001-16" because the the 4108's were bad and I didn't even want to fathom trying to hunt down replacements.) I don't know if it was refurbished by Commodore or a reseller, but it's certainly evidence that parts for those things were mixed pretty freely.

I must be lucky, none of mine seem to have been upgraded, all they have as extras have been option ROMs. One out of this 2001 was just labelled 'Dad's' so I've no idea what's on it

Yet. Oh, my 8096 was worked on or sold by a well known (for Newcastle) shop called Currie&Maughan who used to be 10 mins walk from my Parents' house. PETs and BBCs galore in there. That one has the power leads soldered directly to the board and socketed ROMs. All I needed to do to it was replace the CPU.
W

Home from my break and as promised the 2nd thing I did was burn a business keyboard BASIC2 editor and.... 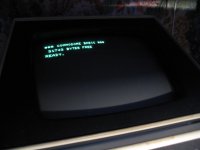 so excellent work on the ROM tip there! Later today I'll swap all the white sockets for turned pin ones, check for track issues under C7 and have a look at the lower RAM issue since it still needs to be masked by my ROM/RAM board. Upper RAM is fine. On the 4xxx/8xxx boards the upper and lower RAM can be 'swapped' by changing over one end of resistors R10 and R11 (swapping CAS0 and CAS1) so hopefully the same can apply to this board with (I think, going from memory) R41 and R42. I'll check the schematics.

But it isn't. It's very definitely wired directly to Vcc along with H1 pin 10 which should be 'pullup 2' (Vcc + R27) but isn't. I won't begin to admit understanding the function of H1 other than it's a dual flip-flop and it's directly responsible for RAS0, and at some point it was decided to decouple it from INIT and instead just wire it high.

How that affects my problem I don't know, but I just thought I'd put it out there.

I had a very strange problem with INIT being pulled down somewhere. Rather than remove every chip it was connected to, I put a jumper around the pullup resistor hoping the offending chip would release some smoke so I could find it.

It never did. That jumper is still in place.
W

Nothing out of the ordinary there. Happily last night I discovered my 3032 not only powers up but likes all 32K AND the keyboard works \o/

Just had a thought, a couple of my Edit ROMs have been in and out so many times they're getting loose enough for me to pull them out unaided, but then again in my 8032 they can work themselves loose too and that still works. Is there a technique or even a tool to re-spring the legs so they hold themselves in again?

I'm just trying to second guess what might be going on, tonight's testing will be the CS lines and IRQ after seeing another thread here about a dead 7425N.

The socket is responsible for retaining the chip. If you have original sockets, those were never very good to begin with.

Loose sockets are problematic and usually need to be replaced.
G

KC9UDX said:
The socket is responsible for retaining the chip. If you have original sockets, those were never very good to begin with.

Loose sockets are problematic and usually need to be replaced.
Click to expand...

The great problem replacing sockets is when we're talking about the PET 2001 with 6540/6550 ICs, they're out of standard (larger than common ones). I had to replace one: I cut in the middle a normal socket and later, when the two parts were soldered on the board, I glued them together again using some epoxy, two components glue, putting a little piece of paper avoiding to glue the pcb too. It worked.

However I solved a lot of issues on my PETs and CBMs (expecially 8032 ones) simply replacing the original sockets, even when they seemed to be ok. IMO ROM sockets are the worst.
I found that simply cleaning with a spray for contacts doesn't solve.

I've learnt a lesson: when I hit a CBM with some issue that I can't solve easily, first of all I replace all sockets with fresh ones. They're easy to remove: simply put a screwdriver below the plastic house an rise it. The plastic will pull out from the pins and you can remove the pins one at once. But beware not to cut traces!
W

These are all brand new turned pin sockets that I replaced the awful white ones with last week, I'll be annoyed if they loosen grip on a ROM chip after only half a dozen insertions!

I think you'll be annoyed, unfortunately!

Try another chip in one of the sockets and see how it feels.
G

I solved pins chip problems (i.e. when it's weak, or broken, etc.) simply soldering the whole chip onto a spare socket (usually an high precision, round pin one). This way the chip get new legs, LOL
W

I did put a couple of blobs of solder onto the loose chips in my 8032 but thought that was cheating.

PET2001 news: I though I'd nailed it last night whilst watching the ROM select chip (74125) and none of the outputs ended up on SELD or SELC according to the datasheet so I ordered a couple of new chips. THEN I realised the datasheet listed the 4 inputs as DCBA not ABCD so I went to bed in a huff.

However, 2 things are happening with the BASIC2 ROMs in alongside the VIA and 2x PIA. If I have C7 in (6520) IRQA and B go low immediately and stay low. I've tried 3 different 6520s that I know are good since they work in my 8032, or at least the keyboard works. Remove C7 and IRQ stays high. Processor chunters along nicely.

Has anyone got the Kernal disassembly for BASIC2 (*looks at dave_m*) that I could scan through and see what might stop it either raising IRQ or getting as far as $C000 before stopping dead.

Well batter my old boots, as they say. After much puzzlement watching the ROMCS lines with different ROMs in or out I remembered something I'd seen (I think) dave_m say that if IRQ was low then either bad ROM or RAM was stopping the processor service the IRQ so I plugged in my ROM/RAM board set to mask nothing but the lower 16K and lo and behold: 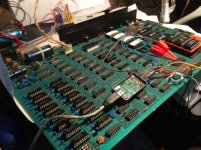 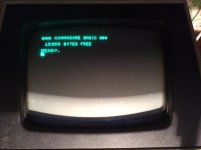 This means that even though my NOP testing showed that the buffers appeared to be working OK along with RAS0/CAS0/CAS1 and all the address lines on all 16 chips there's SOMETHING stopping the RAM working. I know the chips themselves are OK since they test fine in my ZX Spectrum RAM tester, and I've buzzed out all the lines for shorts etc. The multiplexers look OK too so where else should I be looking? I think I'll clean the keyboard up and see if the upper RAM *is* there but maybe a bit is stuck for some reason....

Witchy said:
Has anyone got the Kernal disassembly for BASIC2 (*looks at dave_m*) that I could scan through and see what might stop it either raising IRQ or getting as far as $C000 before stopping dead.
Click to expand...

W,
I don't have a BASIC 2 PET disassembly. I found a good memory map of both BASIC2 and BASIC4 that can get you started: http://www.commodore.ca/manuals/pdfs/commodore_basic_2_4_rom_subroutines.pdf

There are a lot of experienced Commodore computer people there. One of them may have a listing. Click on Options to join. You will have option of following messages on the website or getting a daily email.
-Dave

Witchy said:
so I plugged in my ROM/RAM board set to mask nothing but the lower 16K and lo and behold:
Click to expand...

Good work. You have isolated the problem area to RAM circuitry perhaps on the data bus or refresh logic.
W

Hm, I replied to this. Wonder what happened to it!

I said thanks for the pointers Dave, I'm at the point of replacing all logic relating to RAM since I can't see an obvious stuck line or missing connection/broken track. 4 of the 6 LS244 buffers must be OK otherwise other bits of the system wouldn't work - my ROM/RAM board is only diverting the lower 16K memory accesses. See also IRQ/RW etc. I piggybacked I10 and I11 with new chips today but no difference so I'll socket and swap them later. I also need to order some 74153s. Got some 7425s coming next week then that'll be everything on sheet 5 of the schematics swapped. I can put my logic analyser on my 3032 which has the same board but I'm not sure watching a working machine will help, just show extra activity.

Oh, tried registering with the cbm-hackers but their confirmation email system and support system is broken for new users, bah.