"Computer Systems" device. What is it?

I acquired this a few weeks back. It looked curiously like a computer but I don't think it is a computer but perhaps a peripheral tester or possibly a rack-mount front panel. Does anyone know what it might be? I have further pictures at http://vintagecomputer.ca/computer-systems-computer/

Unfortunately, "Computer Systems" is generic enough that my Google skills can't find anything. Any help is much appreciated. 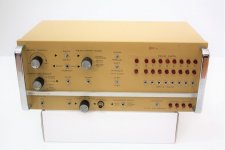 From some of the settings on there, I'd hazard a guess that it's some kind of memory-tester device.

6/8 bit data and nrzi/phase along with variable block size makes me think it is 1/2" tape related
but the wierd thing is I don't see any I/O out of the box at all.

If you set it to 'random' and open loop, I would think it would at least blink the lights.

I suspect that there might be an attachment through the large square hole in the back to the WW sockets, but that's just a guess.

The weird thing is that the "block length" is just a plain old analog pot. Not even marked with calibration.

The large square in the back is part of the puzzle. Here's a picture of the rear "port" with hex bolts which I thought was a little weird. It just goes to the back of the wirerap board but this is area is directly connected through the wire rap board to the ribbon cables that go to the main board. Sadly, the original owner has passed so his son had no idea what it was for but it was an item that was cherished and kept through all these years. 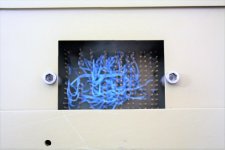 It is some type of test instrument. It looks to be for some type of communications test device. What type of components does it have inside. The date codes might be an indication of what.
Dwight

I would hazard a guess that it is, or at least incorporates, some kind of parallel-to-serial UART functionality, and if I absolutely had to lay a nickel on it I'd say it's some kind of test pattern generator/diagnostic tool for testing telecommunications equipment. It's really hard to say exactly what it does without laboriously trying to trace out that wire-wrap maze in there because all those ICs are really low integration DTL parts that each only supply a couple gates. Without a schematic there really isn't much to give it away.

(It's pretty easy to look up the motorola parts, there's the datasheet floating around that explains almost all of them in one document, but the U6A909759X is kind of a rare bird. Again, totally guessing, maybe using at least some of those as static or shift-register "memory". Maybe its job was to generate a binary pattern, clock it through whatever it was testing, and run compares on what it gets back?)
Last edited: Jun 2, 2019

I'm with Al on this one--the legends all point to some sort of 1/2" tape exerciser/test device. So not serial, but character-parallel with parity.

The NRZI/PHASE refer to the two common types of older tape recording NRZI (non-return to zero, invert on ones) for 200,556 and 800 cpi 7-track and 800 cpi 9-track. PHASE - phase encoding, usually used on 1600 bpi 9-track drives. The later technology, not covered by this device is GCR (group code recording), used at 6250 cpi.

Since it obviously connects before the tape formatter (i.e. direct to a "bare" drive), it's anyone's guess what make and model drives were intended--and how they connected to the WW pin area. You really need a manual for this thing.

NRZI and phase (Manchester) encoding are used for all sorts of applications, but the "Format" switch may well be a giveaway that it's intended for exercising tape drives. Ultimately it really is hard to guess without the manual. I'm particularly curious about the "Transfer Rate" knob that appears to have settings for internal, external, and single-step clocking. It's largely that which made me wonder if it might be for some kind of transmission line loopback testing.

Eudimorphodon said:
NRZI and phase (Manchester) encoding are used for all sorts of applications, but the "Format" switch may well be a giveaway that it's intended for exercising tape drives. Ultimately it really is hard to guess without the manual. I'm particularly curious about the "Transfer Rate" knob that appears to have settings for internal, external, and single-step clocking. It's largely that which made me wonder if it might be for some kind of transmission line loopback testing.
Click to expand...

So what do you make of the 6 bit and 8 bit settings? Looks like 7 track and 9 track to me. "Block" and "Continuous" would also fit tape drive applications.

But it could be transmission line, or telecomms too or some bit of kit that nobody's considered. We don't even know if the interface is serial or parallel. Maybe we could hook this thing up to the "Dumbkopf I"...
D

Tape makes more sense than disk.
It does have a coax input for an external signal so parallel is unlikely. Maybe something like T1. I don't know the modulation differences used.
Dwight

Re six bit verses eight, some of my theories were IAT2 vs. ASCII with parity or stop bits?
M

I'm going out on a limb and say it's a solid state 800BPI reel to reel tape emulator that would be used in place of an old fashioned 9 track reel to reel tape drive. We could probably get more information by taking a peak inside and getting an idea of the construction date from component date codes and seeing whether there is a processor and some kind of non-volatile memory.

I don't believe that it is communications/serial interface related. It just doesn't have that sort of feel - no DTE/DCE settings or anything like that.

mwillegal said:
We could probably get more information by taking a peak inside and getting an idea of the construction date from component date codes and seeing whether there is a processor and some kind of non-volatile memory.
Click to expand...

You can see more detailed pictures at http://vintagecomputer.ca/computer-systems-computer/ If you right click on any of the images, you can view the image by itself and see the full resolution images. The date codes are from 1971 or so.

I appreciate everyone's input. I was going to try to power it up but didn't get around to it. I will as soon as I can.

Note that the four ribbon cables going to the wirewrap board near the rear opening were not connects (they must have come loose during shipping) so I am being cautious as I am not sure what cable connects to what empty socket or what the exact orientation should be.

snuci said:
You can see more detailed pictures at http://vintagecomputer.ca/computer-systems-computer/ If you right click on any of the images, you can view the image by itself and see the full resolution images. The date codes are from 1971 or so.
Click to expand...

Per my earlier post, here's a datasheet that covers most of the "MC8xx" chips that are visible. It's all generic NAND, inverters, flip-flops, etc. Unless there are more chips hidden I don't think there's anything there that's a smoking gun as to what this thing does. (The flip-flops imply it might have some kind of "memory" for storing a sequence to be compared or clocked out or whatever, but it's at most the equivalent of a byte or two.) It's some kind of clocked state machine but definitely not a "computer" in any meaningful sense, I doubt it'll do a whole lot without being connected to something.

I'm fond of Chuck's idea that this is a solid-state implementation of the Dumbkopf I. It's used for field calibrating the magnetoreluctance of Interocitors; dragging a full Turboencabulator out to the customer site is often impractical.
D

I'd not been saying it was RS232. I still think it might be a serial signal tester. There were a number of early serial communication setups for computers of that time frame. I suspect there is a missing header that would go to the terminals on the back.
Dwight

It also could be a tester for a tape formatter. In the bygone days, you had tape drives, one or more formatters and controllers. Back in the day, a formatter was expensive to build, so one would typically be used for a number of drives.
You must log in or register to reply here.
Share:
Facebook Twitter Reddit Pinterest Tumblr WhatsApp Email Share Link
Top