About two years ago, I bought a 16KB-64KB 5150 and a 5161 from someone in Los Angeles (Ebay local pickup only) who was the original purchaser, and had bought them for their engineering business.
He even still had the original boxes, but his wife had been using them to store Christmas ornaments.
I missed him the previous year, but before this past Christmas I called and asked if I could replace those old boxes with some new boxes.

I finally got the boxes, and they came with a bunch of IBM PC marketing materials, and the original sales receipts.

I'm surprised that for the Expansion Unit, IBM just used a 5150 box and stuck a sticker on it. 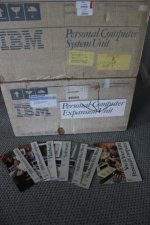 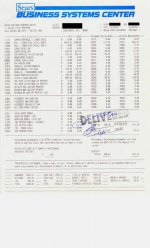 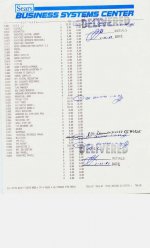 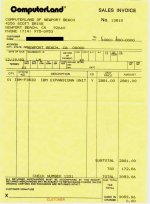 No surprise there. One of my best friends is a programmer and bought the original IBM PC in 1982 or thereabouts. About 10 years ago we were just talking when I asked him how much he had paid for it back then and he calmly replied... oh, about 5,000.00.
L

It's the crappy Tandon TM100-2 for $ 649.99 part that blows my mind.
Hell, I've got some slightly used ones that I'll let go for a third of that price with free shipping to boot, if anyone needs some.

Given the price of the 5161, you can understand the popularity of multifunction cards. One aspect that IBM took too long to figure out.
E

I have the original reciept for the IBM PC my dad and I purchased in September/October 1981 (delivered January 2, 1982)

We bought DOS 1.0 when we ordered the system and that sat around for a couple of months waiting for the machine. IIRC we also got the BASIC manual ahead of the system.

Heh. I bought mine at the Computerland in San Jose. Maybe I've still got the receipt--I'll check.

Whatever happened to Millard's daughter (can't remember her name, but do recall that she was part of the business--apparently, as was est)?
B

I found this thread to be extremely enlightening. And if you look at the pricing of these machines, you see exactly why so many people couldn't get into computing. The prices were just too high. It wasn't until 1995 that I was able to actually buy my first "real" computer. It was a Packard Bell LEgend running Windows 95 with a 75 Mhz processor and 4 Megs or RAM all on a 560 Meg hard drive. Even thin, I spent almost $1000.00 for it through Circuit City. My previous computer was also a Packard Bell, but that one was one I bought used for $100.00 with a 30 Meg hard drive, and 5 1/4" floppy running a 286 processor and monon graphics.

When I bought that Packard Bell, I though I really had something! 14.4K modem, 640X480 graphics with realistic color. I credit most of what I know about modern computers to that one machine. Since I had never had to play with manual interupts, or dip switches. And that also explains why I like many others have such a hard time getting around the first PCs.