Whats the purpose of this hole? 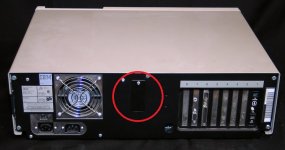 My XT has it. I thought it was an emergency exit!
R

Stone said:
My XT has it. I thought it was an emergency exit!
Click to expand...

Emergency exit screwed from outside? :D

romanon said:
Whats the purpose of this hole?
Click to expand...

I am pretty sure that the question has been asked on this forum before. One of the suggestions was that IBM may have been allowing for a possible future use where all slots are populated (i.e. no slot blanking panels), and a cable needs to be run from inside the case to outside the case.
R

modem7 said:
I am pretty sure that the question has been asked on this forum before. One of the suggestions was that IBM may have been allowing for a possible future use where all slots are populated (i.e. no slot blanking panels), and a cable needs to be run from inside the case to outside the case.
Click to expand...

So place here battery pack in XT-286 was great idea. At least some...

I suppose, that for same purpose is whole on IBM 5150

I always thought it was a blank to mount an extra serial or parallel port. Later tower designs included pre-cut blanks you could punch out for a db9 or db25 connector.
G

Also circuit 74LS158N was added to socket U84
It can be assumed, that IBM recycles their older motherboards to produce 256-640k boards, or it is clearly custom made?

I have also such a motherboard, mine sticker is actually writen by hand...

I figured this would be a good place to ask this...I have two questions.

1. What size are the case screws that hold the top and bottom cases together? My XT 286 didn't come with any and it's kinda hard to pick up as a result...

2. Is this a serial number sticker or is it just nothing? I was trying to find something aside from "copyright 1985" to tell me when my XT 286 was built and this sticker is the only thing I found.

I just found a lot of old computers and cards in the garage that are in great condition. Among this find is an IBM 5150. I plan to sell the things that I have. The question is where is the best place to do so? Should I use ebay or should I find buyers some other way. I also have some pretty old hard drives ( Seagate ST-151 among them ). Thanks in advance for the advice.

Here is probably the best place to sell your old computers. I'm interested in a 5150. Probably the best thing to do is make a post in the For-Sale-or-Trade section. Pictures would help a lot. 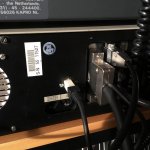 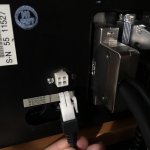 tgunner said:
I have a nice IBM Hardware Facts Pamphlet, so I scanned it in to the web. Here are the links:

This may be somewhat off-topic or at least meta, but this sticky thread, along with a bunch of other threads on vcf, contains a number of old Photobucket links. They're nearly non-functional now, and that's incredibly annoying, in that you can almost but not quite access those old images and read what it said in those old brochures.

That's because of shenanigans and shittiness from both Photobucket and the W3C and Mozilla/Firefox and other browser-makers.

Photobucket has pulled a bait and switch, which, however common on the web these days, is really deceptive and should properly be illegal on a federal or international level. Like Lord Vader in The Empire Strikes Back, they have retroactively altered the deal, and now you can't really access the images properly anymore, which makes even Photobucket's slogan of "host. store. share." outright trollish, because they've making the sharing of their images as hard as humanly possible.

When I visit any of the above links, the images are technically loaded, but they're not loaded or rendered as the direct links they pretend to be, but instead presented embedded in a html page (with ads unless I block them) at a reduced resolution.
Normally, I, the owner of this computer, and being in control of the browser on MY computer, normally I would just right-click on any image and view it alone and full-size, and zoom it to whatever is comfortable for my ageing eyes.

Ah, but not anymore:
You see, Mozilla/Firefox and the W3C have fallen prey to corporate entryism.

Mozilla/Firefox have increasingly and incrementally removed browser features that put the user in the driving seat, and added features that make it easy for remote corporations to fight users for control. (If this phrasing sounds familiar, that's because I've recently said similar things in another context here.
It used to be that you could view the source, and it would tell you exactly what's currently there on a source level. Not anymore. When you now click view source in Firefox, it re-fetches the source, i.e. it doesn't actually show you the source of exactly what you're NOW looking at, it just shows you whatever the remote corporation would deign to show you on the repeat attempt. And that might be different. In the same vein, older versions of Adblock Plus on older versions of Firefox used to show you a list of all the resources currently in play, but no longer.
And Firefox used to have a fairly straightforward cache, but a lot of the content and cookies have now increasingly been squirrelled away in databases that complicate access for mere mortals, and mere mortals often can't even get browser add-ons anymore that would put that power under their fingertips, because add-ons are now a walled garden, where curiously the really user-empowering stuff simply doesn't get "approved", and then they've rammed signing down everyone's throat too, so it's a real pain to even run "unapproved" code.
Plus, partial downloads now often get deleted instantly, as does everything Firefox still puts in /tmp, to make absolutely sure you the owner and user of the computer are no longer in the driving seat. (You often can't even retry downloads that fail for any reason.)

Meanwhile, the W3C has changed the standards, to make it easy for remote corporations to come up with ever-shape-shifting tags that try and defy classification and filtering by the user, but they've approved plenty of changes that give remote corporations a lot of control over what goes on even when the user doesn't want that. We used to call that sort of conduct spyware, adware, malware, or trojan-like behaviour, but now since it's a website and you're voluntarily visiting the website, apparently that's okay. Adware authors back in the day made the exact same excuse: They were justified in doing whatever, because you were using their program, after all.
​

Photobucket have fully exploited everything the browser-makers and the W3C have handed them, and they've now made it so that if I try to right-click and save those images, that only saves the HTML of the embed-page.
Oh, and "meta http-equiv='Cache-Control' content='no-cache, no-store, must-revalidate'? Why thank you, W3C and Mozilla! We wouldn't want the user to be able to decide or override anything that goes on on their own PC.
If I try to drag and drop the loaded image to a folder on my computer, Firefox reloads the image before copying it, (literally wasting user bandwidth just to make sure remote corporations are still in full control), and Photobucket then serves up a destructively watermarked mess on the second attempt, trollishly and ironically marked with the aforementioned slogan of "host. store. share." Yes, "share." As if.
The only ways to still view the image at full resolution seem to be:

tl;dr: Is there any interest here at vcf in removing and replacing all the photobucket links from these forums, at least where copies of those images even still exist?
(I'm thinking, if the links are fully dead then leave them for the record, but otherwise, perhaps substitute image sources that work, like this site's own?)
I suppose it might be quite the job to do so, and it would require hosting the images here at the forums, because even imgur is starting to pull a bait-and-switch where direct jpg links often redirect to ad-ridden pages that already break normal usability, and presumably that will only get worse.
I know this might be a pain in the neck to deal with, but perhaps it's a good idea to rescue those images before they're fully gone?
Shouldn't at least the image links in these sticky threads be replaced by ones that fully work?
What do people think?

PS: And btw., I don't suppose anyone knows an image host that isn't bait-and-switch and doesn't suck? I suppose that's not sustainable? Probably the bait and switch was part of the plan for all of the "free host" places all along? It makes a user feel like one of wild animals starring in Shawn Woods' Mousetrap Monday, where first he feeds them, and then he, ahem, features them.
R

Wow, that's really interesting, because I've never known what that hole was really for. Was it explicitly for precisely this, or was it a general hole for any and all cables that perhaps needed sneaking out of the case? Can you show us the other side of that? Like, what does the cable connect to on the inside?
R

itsvince725 said:
2. Is this a serial number sticker or is it just nothing? I was trying to find something aside from "copyright 1985" to tell me when my XT 286 was built and this sticker is the only thing I found.

I have a question on the U28 socket on the BIOS row. What goes there and if the socket is damaged will the board function properly? I acquired a 5150 chassis w/ motherboard and it was in poor shape (looked like it had been buried in dust and filth) and this socket was rather mangled. I have hopes of cleaning it up and getting the board back into action one day, but this damage was the first obvious issue aside from the dirt.

Everything I have seen indicates it remains empty, but I was looking for validation. The board is a 64-256k type. Too much grime on the board to read much else. Figured I'd ask before expending a lot of effort should repairs be beyond hope.
You must log in or register to reply here.
Share:
Facebook Twitter Reddit Pinterest Tumblr WhatsApp Email Share Link
Top