I have one BA08s coming with the PDP-8/L machine I have and I wanted to use my machine with a vectorscope of some sort so when I saw a KV8/L option on Ebay I jumped on it. The BA08 manual says that the KV8/L and VC8/L option is mutually exclusive. It lists the card position for the VC8/L but not the KV8/L. Where do the KV8/L cards go?
https://drive.google.com/file/d/1bPXPD2U14bLVh_qIJEK6TlAkxAsOv9xb/view?usp=drivesdk

I checked my printset and there are none of the boards in the KV8/L listed in the module-map of the back-plane. The back-plane has two free dual slots and one single slot between CD 20-22. But is there any wiring for KV8/L here? Any input appreciated!

I think Jack was researching this at one point.

This is just a teaser, but it also shows the AC transformer. I'll send better pix at the end of August when I'm back at the Computerarium. 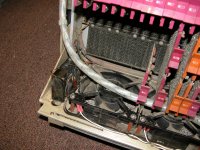 Just wonder if this is someone taking notes for the module placement in a BA08? Or something completely different. The BA08 manual linked above says that AB29-AB32 are M903 cables for the MC8-L option going to the CPU!

No it doesn’t make sense.


I can take photos but I guess that Jack will get to the boards first. Mine are 100 km away and I won’t get there until late august. The picture above shows all cards but the A712 voltage regulator module.

MattisLind said:
I did check the KV8/I manual earlier as well but it doesn’t mention in which location the boards go into a BA08.
Click to expand...

I'd have to open up my BA08 to be sure it is analagous, though I would expect it to be.

I'd expect similar substitutions in the BA08. The KV8/I does show the A712 regulator in H21 and the G778 cable in J21, which don't have an analog in the VC8/I. I'd have to study the prints to see how the interconnect goes between the other modules and the regulator and cable. And maybe open up the BA08 to see what they did there. The VC8/L I/O connector is at C36, for what that's worth. The rest of the VC8/L seems to be in CD27 through CD29.

There appears to be a missing section for the KV8/L at the bottom of page 4 of table 2 here:
http://dustyoldcomputers.com/pdp-co...ipherals/docs/DEC_BAO8_PeripheralExpander.pdf
Sadly, that document's module locator pages dont explicitly reference the KV8/L either.

I also seem to recall there are two versions of the BA08, so hopefully we are talking about the same one.

I can take photos but I guess that Jack will get to the boards first. Mine are 100 km away and I won’t get there until late august. The picture above shows all cards but the A712 voltage regulator module.
Click to expand...

Yeah, I meant of the sort on my website, from which I reverse engineer the board layouts. Straight on of he front and back is best for that.

Thanks Vince, this was the confirmation I needed. The sentence in the BA08 stating the VC8 and KV8 is mutually exclusive makes sense then since they most likely share the same positions. Unfortunately not very well described in the manual.

Now it makes sense for me to get on a hunt for a storage diaplay. A VT01 prererebly... (or Tek 611). So if someone has one to sell, please get in touch... Meantime I will look for decently priced storage scopes.

@Vince: If you have some time to look into your BA08 to figure out the cable and regulator module placement I would appreciate it a lot. Mine is still 100 km away.
W