This came up from Chuck Colby's estate sale and I grabbed it. Regrettably no keyboard, psu, or drive unit. But I remembered it from ChuckG mentioning it in our chat about the Mindset. It seems to be in a similar vein.. a weird, modular 186 based machine. Wondering if anyone knows more about it or what its designers were offering with it that was unique. Info on it is sparse. Probably will never get to power it up as the power brick is missing.

Yeah, I repurposed a 3000 series MAD box for an XT clone. You can actually fit a full-sized 286 motherboard in there, but it's very tight. Still have the thing. Very nice case--a Halted special back in the day.

So they did persist for a while it sounds like? I wonder, was their goal just to produce IBM compatibles or were they aiming at the high end like Mindset, etc? The use of the 186 seems odd. The screen resolution seems to be pretty high for the day.

I posted it on Facebook and Lee Felsenstein said this about it: "MAD computer! Designed by John Babel - Osborne bought rights to that design in order to jump-start our IBM compatible version.
The schematic was on two large sheets of opaque paper (I.e., not capable of blueprint copying which we used in those days) and had lines ending in diagonal arrows pointing toward the opposite corner - you had to search in the direction of the arrow until you found the destination.
I drew my own set of schematics using proper Mil-STD-15 symbology and techniques, checking with Babel until he agreed that everything was correct. Then he asked if MAD could use my schematics (yes).
So if you ever find the schematics I’d like to get a copy."

I think that MAD brought out a 386 system as their swan song. I'd have to check something like back issues of CW to verify that, however. Could be that it never got past product announcement.

Just a blip in the overall x86 PC business.

I'm curious - do 80186 based PCs tend to fail with compatibility because of the 186 itself? Or is it because they tend to use proprietary designs (ie. forgoing ISA slots, nonstandard hardware etc)? Is it possible to make a fully compatible MS DOS PC with a 186?

It depends on the implementation. Most 80186 designs use the internal peripherals (timer, DMA) which makes them incompatible at a hardware level. But it's possible to use external DMA and timer peripherals and get very close to a real 8086 PC, but then there's little cost savings over doing the design using an 80286. Later versions of the 80C186 featured more PC-compatible integrated peripherals and is widely licensed as an FPGA core.

There were a few 186 based clone motherboards out there in the late 80's that you could order from the back of Computer Shopper that were supposedly about as compatible as any other "Turbo XT" (which is to say, pretty good but not perfect), but I don't know if those were based on more-PC compatible variants of the CPU itself Chuck is referring to, or if they just disabled all the onboard peripherals and just semi-pointlessly used the '186 in a brain-damaged cut-down AT architecture.

(It's also possible they used a somewhat common technique utilized by oddball "semi-clones" that abused Non-Maskable Interrupts to trap attempts to access certain critical parts of the PC hardware and re-route/fix-up the request to use the hardware the machine actually has. Never actually seen one in the flesh so I can't say how compatible they really were.)

To reiterate, the CPU core isn't the problem, it's that the onboard peripherals that Intel added to make the chip a "bargain" don't follow the PC standard. They're technically better; if IBM had used the 8089 system controller Intel intended be used to make "real computers" out of the 8088/8086 instead of cobbling the architecture together out of parts intended to go with the 8080/8085 an 80186 would probably have been a no-brainer upgrade.

I want to say there was some method for multiplexing those two DMA channels mentioned in the 80186's long-form datasheet, but I can't say I did more than skim it a year or two ago.

Well, it's possible, but my 186 programming was long ago. I think there was a way that you could cascade a DMA channel with an external 8237, but I don't recall being able to multiplex them.

What folks are missing is that the 186 was originally intended for microcontroller applications; i.e. embedded systems. At the time of its release, Intel was still trying to get people interested in the 432 or the 286, both to be released Real Soon Now. Indeed, that's where you can find most 80186/88 chips today--embedded in a piece of equipment. In that role, it did a pretty good job.

So basically the synopsis is, a bunch of wanna-be IBM clone makers decided to one up the PC by using the 186, avoiding the cost of the 286 but not accounting for just how vast the PC software library was becoming and how much of it relied on DMA etc being external to the CPU?

You'd think after a couple companies tried it and failed others would figure out it didn't work so well..

It's pretty amazing how similar this MAD-1 is to the Mindset. Same CPU, same goofy modular system, even uses the same Shugart SA-455s. Only big difference is the Mindset's graphics -if I'm reading this Infoworld article correctly, it couldn't do graphics at all? The way they worded it is kind of confusing.. I'm not sure if they mean that it only has the same extended character graphics the PC did, or if it means for graphics you can only use whatever graphic symbols it has.

At the time (1982), nobody was certain that the overpriced 5150 was going to be a market success.

I was part of a project that created a 186-286 system driving traditional terminals back then. The 286 was viewed as an upgrade (to run Xenix), but you could boot (non-standard) MS-DOS on the 186 as an entry-level affair. Later, as you expanded, you got the 286 and added an extra memory card and off you went. The 186 did the I/O for the 286. I believe it preceded the 5170 by a couple of months. Similar idea of the TRS-80 model 16.

Remember that at the same time Bill Morrow was selling his Z80 systems. Since he was selling a complete system (CPU, terminal, printer and a pile of software), his was a very attractive package. At the time, graphics for business use wasn't a huge thing yet.
K

The MAD-1 is able to run Flight Simulator so it has to have some graphics. Might be one of those oddball graphics systems that supported CGA or MDA but had to be set in the correct mode for the monitor.
G

I recently picked this up. Is this a MAD1 keyboard? 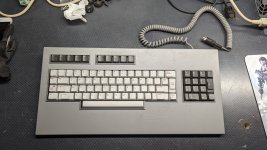 Welcome to the forum @Gumball3000 . Please introduce yourself in the appropriate topic.