Being new here I thought I would write up this week’s Vintage Computing Endeavours.

Last week I purchased a tired old 3032 and a 8050 dual disk drive over the internet and on Wednesday I completed a nice round trip the The Centre for Computing History in Cambridge UK to pick it up. My intension is to electronically refurbish the computer and add it to my small but growing collection of 1970's Computers. I had good memories of the iconic looking machine from my teens; I owned a PET 8032 you see when I was about 17, given to me from my brothers company - one of many they threw out at the time.
I must say I was very impressed with what the Centre for Computing History are doing up there in Cambridge, the place looks great and run by people with pure passion. If you have not already, go and take a 'peek' at their website: http://www.computinghistory.org.uk/

My New PET with its Seatbelt on: 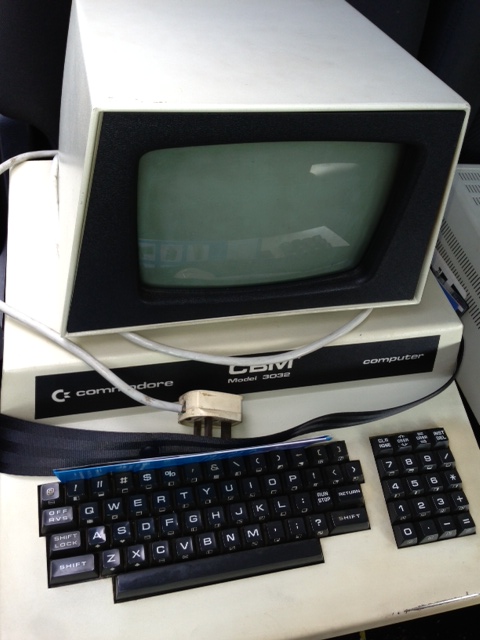 Thursday morning I set about fixing it, I have recently been quite ill, so rather than disappear into my workshop I was allowed to throw a towel over the dining table and fettle with the 70's technology in comfort. This unit was purchased with no display other than scan lines when the brightness was turned up. 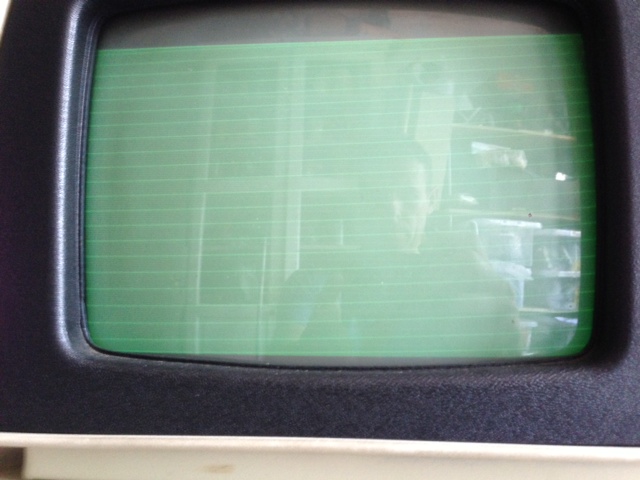 So first thing I decided to do was a voltage check, I picked the cathode side of each diode that sat across each regulator, with voltages correct and present I also checked for the same readings on the main memory chips, again all voltages were correct. One thing I remember with my 8032 was its start-up beep, so on not hearing this on my new PET I assumed the Logic board was not working, anyway while scratching my head I decided to turn down the brightness to rid the screen of the scan lines, as I pulled on the brightness control on the rear of the CRT, the screen flickered into life with a load of garbled characters! 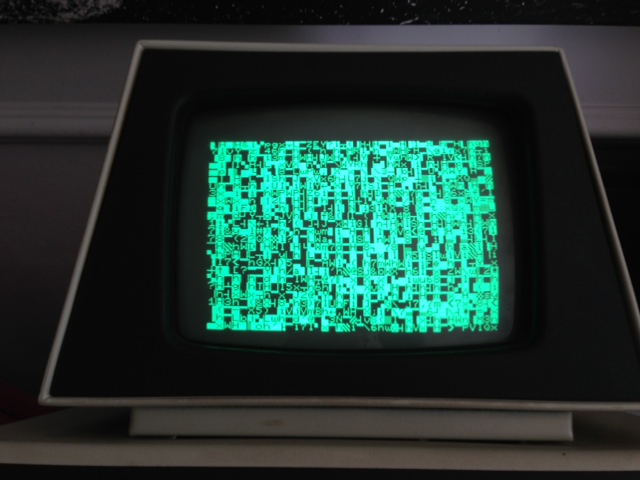 So the logic was working albeit with some sort of memory issue, my 'focus' turned to the CRT side of things, I stripped the circuit board out leaving the deflection wires connected and noticed a couple of out of shape capacitors. So my first job was to replace as many as I could with what I had in stock, I carry most values in 105 degree 50v, I manage to replace all but 2, a 10MFD 25V non polarised and a 3.3uF 200v Electrolytic; both of which I have since mail ordered. Most of the removed capacitors were reading quite high; for instance all of the 47uF were reading 64uF +- 2uF!
While I had the board out, I lifted the two heatsinked semiconductors up, cleaned the hardened compound off and put some new modern thermal grease under them. I then decided to reflow all solder joints and found the original problem: 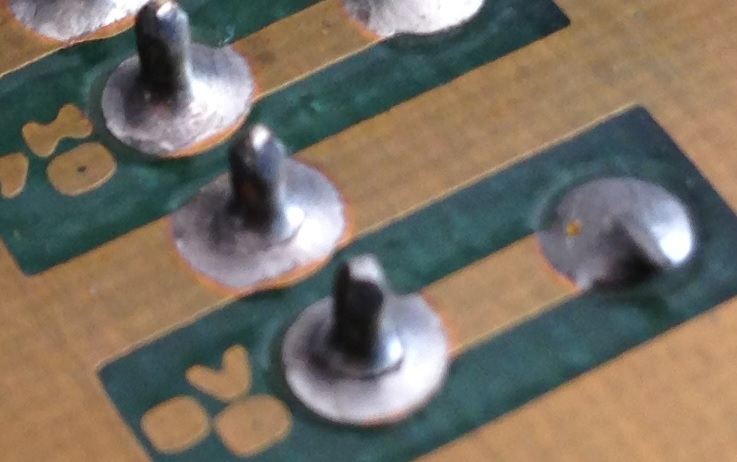 With all the joints now like new I cleaned the rest of the board, serviced both variable resistors with electronic contact cleaner and then placed some silicon grease around the HV cup and replaced the whole assembly. Once switched back on I was presented with a nice stable image that did not budge with any movement of the brightness pot.... result 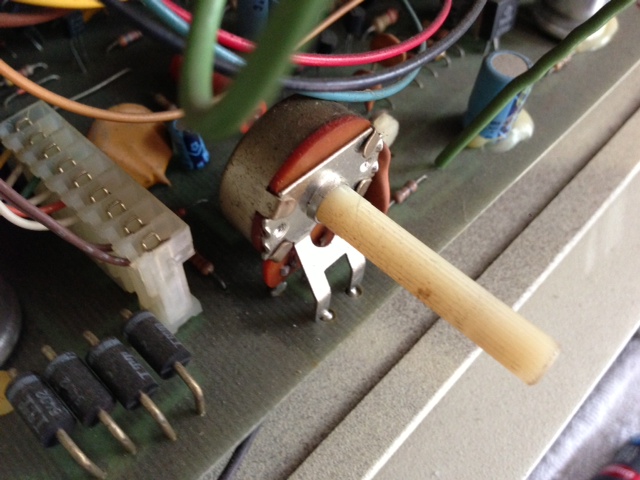 However I still had that garbled screen to contend with, I decided to give the Logic board a good clean, a soapy hot water brush off and a good hairdryering after ; much nicer to work on that way: 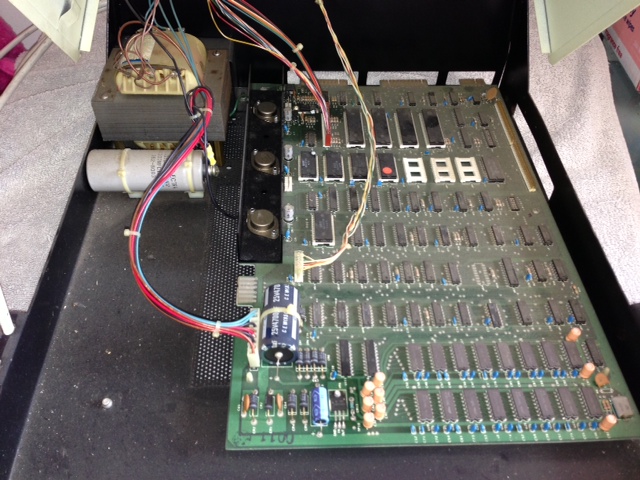 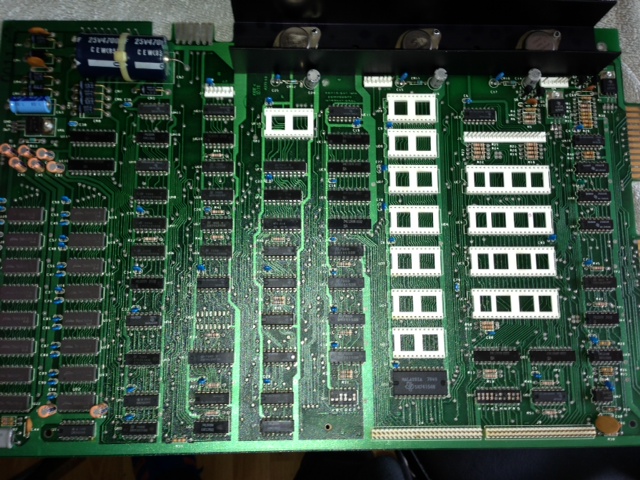 This made no difference to operation, so with some searching on this forum I found the pet tester image and blew that onto a TMS2532, installed and booted it told me what I needed to know, the CPU was running fine but ALL the memory was bad..... 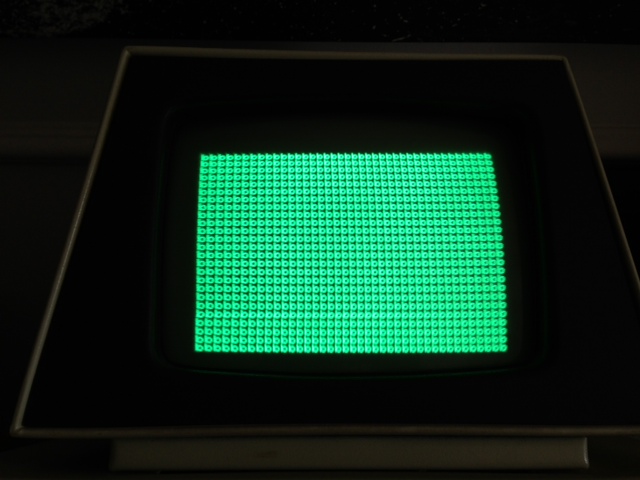 Now I am seasoned enough to realise that not all the memory would be shot and knew I was more probably looking at some sort of bus or addressing issue.
With that in mind I decided to refit the original Kernel ROM and remove the remaining socketed chips one by one, I was obviously having one of them lucky days, I removed the left hand PIA, and boom no more garbage, presented to me now was pure nostalgia…….. a BASIC prompt, however the feeling of the 'fix' was short lived as I had no cursor.

So Nearly, BASIC with no cursor: 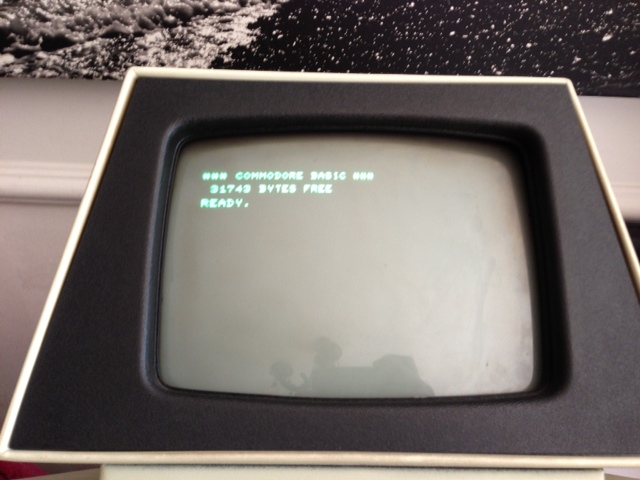 I went on to remove the second PIA and rebooted, wow, I now had a cursor, I found this very odd could 2 PIA's be faulty? I tried both of the 6820's in each socket and for sure they both had problems, one stopped the kernel from loading keeping the initialisation rubbish on the screen and one hung the BASIC cursor, no matter which socket they were in each presented the same error. I had a look through my chip boxes and found 2 6821 PIA's which are now at home in my repaired PET. (I am sure the 6821 is 100% backward compliant in place of the 6820) 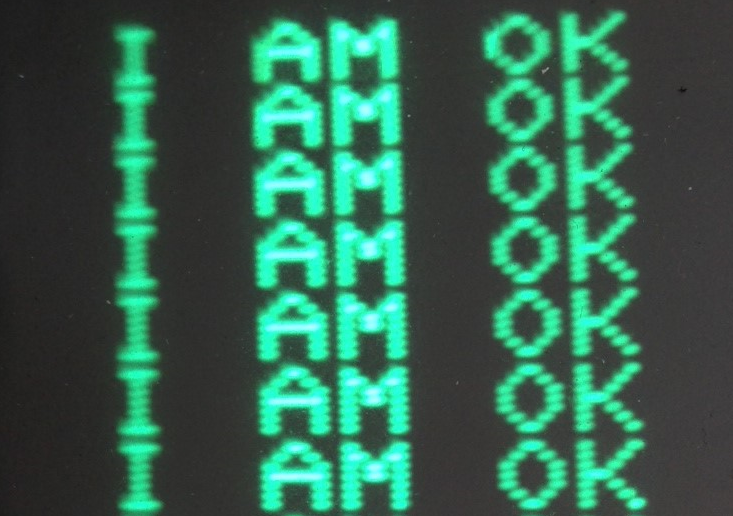 All in all I had a great day, as did my kids, by around 2pm I had my boys arguing over whose turn it was to ‘have a go’, and my eldest son spent 2 hours working with PRINT and INPUT commands which he had never used before.

Anyway I hope you like my story, my next steps are to replace the final 2 capacitors on the CRT board, replace all the capacitors on the logic board and find a cable so I can start to work on decommissioning dual floppy drive.

Note that the PIA UC7 is the source of the 60 Hz interrupt that starts the routine that blinks the cursor and scans the keyboard.
G

btw you wrote 8032 in the thread title, it took a little to me to understand how you could get a garbage screen with an 8032... I had to go back to the first picture to realize you were fixing a 3032. Great machine, I have one and, due to my lack of knowledge, I suffered a little (euphemistic) to fix it (and only with a lot of help by the gurus, here )
C

giobbi, yes your right doh! I keep typing 8032, I think its because I had one when I was younger (a lot younger) - I wonder how to change the thread title to 3032, does a moderator need to do this ?
W

Clint said:
I wonder how to change the thread title to 3032, does a moderator need to do this ?
Click to expand...

Nope. You should be able to edit the title by clicking the Edit button on your post, then clicking Go Advanced.
C

WMH said:
Nope. You should be able to edit the title by clicking the Edit button on your post, then clicking Go Advanced.
Click to expand...

EDIT: It looks like that only changed the title of your post and not the whole thread. Sorry about that... I guess you will need a mod to change a thread title. I'm just the Wiki moderator, so you'll need someone else to help you out. The other mods are listed on the front page under Site Leaders.
R

Great job on diagnosing and fixing the PET!

Well I received the 2 missing capacitors today and the non-polarised one just does not seem right. All the others I replaced with modern 105 degree 50v caps and they were all very similar sizes to the originals. However the 10MFD 25v NP Original is about 5 times the size of the new 10uF 63v NP one I have purchased.

In the picture Below I have ringed the 10MFD original in Red and the new one I have is about the same size as the one ringed in yellow.

Have I made a mistake identifying this component, just wanted to throw this out to you guys as a check on my sanity
C

Just realised I missed out the picture doh! 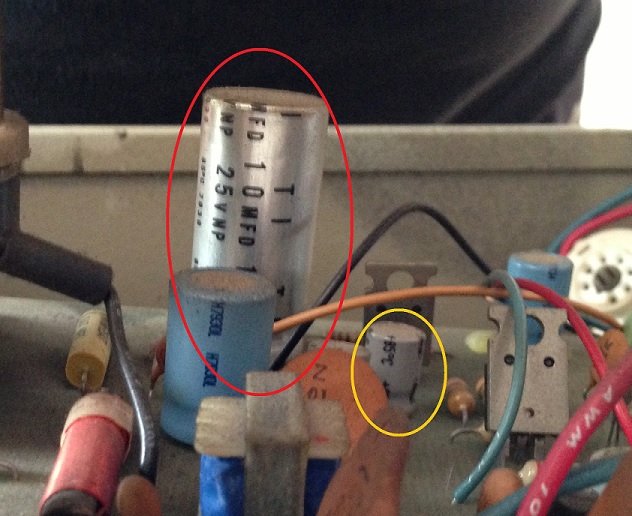 Anyone got any comments on the Capacitor issue ?
P

I would be a bit wary myself of using a smaller sized cap especially that much of a size difference. May need the larger size to dissipate the heat!

That does not strictly ring true, modern caps have lower ESR and therefore generate a lot less heat, the old cap was only rated to 85 degrees the new one 105 - I was more worried about the value being wrong.

I might just bite the bullet; I can replace it and use the IR Temp monitor to check it while in use.

Thing is modern electrolytic's are normally quite a bit smaller however in the PET's case they were not, however this NP Cap is significantly smaller, ringing my alarm bells
P

Clint looking on the web the general consensus seems to be it's ok as long as you have the right temp rating and voltage rating (same or higher that is).

Maybe it is me just being stuck in my ways, I always try to replace like for like with these old beasts.

It seems modern caps are made with different materials and so are much smaller and perform better.

A lower esr and so less heat it is then, oh and smaller size gives better airflow too it seems!

I've learned something, which can only be a good thing!
C

I have procured 2 more sick PETS in the last week and in preparations I decided to finish off the electronic servicing of this 3032, not much to report but I wanted test every electrolytic on the main board and replace any that were out of spec.

Firstly the big 13000uF cap near the transformer was spot on as was the 4700uF axial strapped to the board,however the 470uf 25v Axial had however gone high at 676uF so that got replaced, all 47uF electrolytic's byt he regulators had also gone very high to 78uF - 80uF so they all got replaced with 105º 50V items. All the 10uF were quite amazing and measured within 0.5%.

Now with all the capacitors to spec today I am going to check the ripple at the IC to make sure there are no nasties. That done I will leave alone, although the paintwork is worn off in places I am kind of not tempted 'yet' to repaint this rather than to leave it looking used like an old guitar.

Clint said:
Firstly the big 13000uF cap near the transformer was spot on as was the 4700uF axial strapped to the board,however the 470uf 25v Axial had however gone high at 676uF so that got replaced, all 47uF electrolytic's byt he regulators had also gone very high to 78uF - 80uF so they all got replaced with 105º 50V items. All the 10uF were quite amazing and measured within 0.5%.
Click to expand...

High isn't generally bad with capacitors, except when they are used in timing circuits etc. These ones look like they are smoothing the supply, so a little extra is a bonus. The tolerance of these things is something like -20%/+80%, so the 47uF's reading 80uF are just within tolerance. The designers should have factored in the possibility of high and low values when selecting the part to use, but when the choice is 22uF, 47uF or 100uF, it's always going to be approximate fit.

The new ones have higher temperature rating and lower esr and less likely to leak that the older ones anyway.

Just out of interest, did you measure the new ones?