I have just purchased (won) a Rainbow 100A in box with VR201 screen, keyboard, software and a printer. I have yet to collect the item. I have never used or seen one of these as I was still in junior school when this one was purchased I've attached some pictures. I'm interested in cleaning the deteriated "glue" from the screen. I'd be interested in what methods and chemicals have been used to clean this with success?
I have an RX50 in my PDP-11/53 so I'm aware of the reliability of this and will check the rainbow one over and use some old floppies first before inserting one of the Rainbow software floppies. 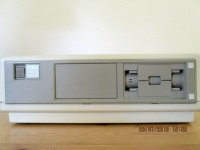 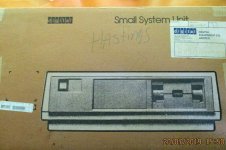 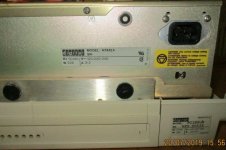 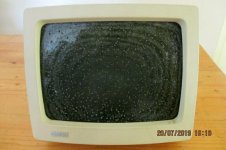 You may look after "CRT cataract". You will find videos and pictures.
I did this using some Nylon cord, sawing the glass from the tube.
Here is a picture of that procedure: http://www.retrobyte.de/images/img_3360-1000.jpg
This took about one hour. The Nylon did not scratch the glass.

Next time I will try this with a very stable and thin wire, maybe from a guitar or diamond litzwire for teathered flight.

You have to disassemble the CRT and pull the safety glass off, then remove the PVA layer and clean up the face of the tube. There are plenty of videos on the process, search for "CRT cataracts" or "CRT mold."

I have successfully used butylacetate to dissolbe PVA in my VR201. Used a ink cartridge syringe to inject butylacetate inbetween the CRT and the front screen. After a week the PVA was dissolved and front glass came off without any problem.

Butylacetate is smelling quite strongly but is not harmful. It is used in nail polish.

I prefer this method rather than using a heat gun on the CRT.
M

When we disassembled the VR14 on the PDP-12 the front glass was only attached over about 10% of the surface so we could easily remove it.
H

On a Rainbow 100, be sure to check the flex print cable from the power supply to the motherboard. If any of the parallel lines aren't conducting well, it can overload the others and cause the cable to melt.

Also, it's possible to write Rainbow floppy images on PC with a high density 5.25 drive. I did this back in the 90's for my Rainbow 100A I had back then, no problems with read/write errors.
Last edited: Aug 23, 2019
T

I was going to suggest a heat gun, but Mattis doesn't prefer it so maybe take his advice.

The stuff used in nail polish over here is called acetone. Maybe it's the same stuff he mentioned. Also keep in mind that ammonia is a far better penetrant then acetone, at least when it comes to removing tiny bits of grit from recessed areas and crevaces. But it takes time. Soak an item for 24 - 48 hours, if it can take it. Notice I said better penetrant, not solvent, as there can be subtle differences. For this application a good solvent is probably recommended. We have something called PB Blaster over here, and CRC penetrant. Used by mechanics to free very rusty, stuck bolts. I wouldn't say the stuff works miracles, so not sure how much better it is then wd-40, Liquid Wrench, etc. PB will melt Styrofoam. Not sure if it'll dissolve glue to any extent. But it may be sufficient to break the bonds.

I don't believe removing the CRT is necessary. Rather just the bezel would have to be detached.
Last edited: Aug 23, 2019

Acetone can probably also be used. It will also dissolve PVA. But it has a much lover boiling temperature. Around 50 degrees centigrade while butylacetate is around 120. This means aceton will evaporate more quickly.

My understanding is that aceton is used as nail polish remover. While the polish itself contain various ester as solvents.

MattisLind said:
Acetone can probably also be used. It will also dissolve PVA. But it has a much lover boiling temperature. Around 50 degrees centigrade while butylacetate is around 120. This means acetone will evaporate more quickly.
Click to expand...

It's also very toxic and should never be used in unventilated areas.
T

Well I try to avoid breathing anything given I feel it immediately in my lungs. I don't spray cleaners at all anymore, except for glass cleaner on the windshield. I wasn't aware of specific toxicity of acetone. Clearly it's a chemical agent. But so is paint thinner, benzene, gasoline and kerosene (omg what a headache they give me). Always have ample ventilation. Even that Mr. Clean garbage makes my lungs burn.
Last edited: Aug 23, 2019

The heat gun method is fairly safe as long as you don't go nuts with it. Heat it slowly and gently.
T

The thing is whatever solvents you use it isn't going to be much. Still you'd have to stick it somewhere, even outdoors in a bag. But depending on what it is sticking it in a bag may cause it to attack the plastic, so be leary of that. Maybe outdoors under a board, or inside a box with a bag around that, just not tied shut.
P

Brilliant, some great advice here. Thanks. I will be collecting the rainbow week after next. I'll update on my progress then.
T

Collected the Rainbow today during a business trip, it has several original 5 1/4 floppies and manuals. Haven't had time to go through the stuff. It'll all be in boot of my car until the weekend. Also included is a new Microline 82a with a box of faded paper, this has all been in storage from new since 1983. Not sure I'll have a use for that though. I'll list the software floppies hopefully at the weekend.
T

The disks, if proprietary, likely represent stuff that's readily available. But if not, first things first, make images with Imagedisk. Even if they were stored in favorable conditions, the data is still prone to deterioration. Some disks give up the ghost as they're displaying the contents of their directory. It's happened to me.

The format of the RX50 is far from a proprietary mystery, thankfully. http://home.iae.nl/users/pb0aia/vax/rx50.html
T

I was referring to the content, not the format. I should think, of all computers, most s/w is stored somewhere on the net.
P

I checked over the PSU and powered the Rainbow up with nothing connected to PSU, fan runs ok and voltages appear ok, reconnected internal cables and powered up, Rainbow goes through selftest but I see an error under the "cateract" something that ends with keyboard and the LED's on the back confirm this. If I press setup, I can just make out the setup screen under the cataract. If I hold down each key I get the continuous clicking I would expect. I do have one query. If I hold down enter on numeric pad I get continuous clicking but not If I hold down return on main keypad. I can't see the screen clearly to read the error so time to try and perorm a cataract operation.

I have disassembled the VR201 and there was a red sticky liquid around some parts of the case, I don't see any leaking caps, but when I wiped all the CRT clean it would appear that the red liquid may be from around the anode cap. Now time to try and remove the glass from the CRT, seems to be very well stuck down with what looks like a couple of mm of "glue" between the two.
T

I was able to successfully treat cataracts using the simple method of carefully and slowly removing the safety glass with a flex knife. The heat gun may help, but it isn't required. Out of curiosity, why did only some terminals and monitors use safety glass? Where do you even purchase safety glass these days?
You must log in or register to reply here.
Share:
Facebook Twitter Reddit Pinterest Tumblr WhatsApp Email Share Link
Top