I'm looking for a so-called "bus correction kit", an after-market hardware hack that fixes an incompatibility in the AT&T 6300 and Olivetti M24 that occurs when using EGA or VGA cards. This product was sold for $45 in the late eighties by W. Allen Associates in Cupertino, Ca. (Can't find any information about this company on the web, only some old references on Usenet.) It consists of a card and a separate disabler chip for the on-board video board.

If anybody here either has these items or can tell me where to procure them, I would be VERY grateful.

I think it is much easier to find an AT&T PC 6300 WGS (a 6300 with the endian-bug fixed). Without even trying very hard I found two in the last year, whereas I have NEVER found the hardware endian swap board.

So you have been looking for it, then?

Do you have any idea what became of the guy who used to make them? Bill Allen, and his company "W. Allen Associates" in Cupertino, Ca?

Probably long defunct. Who knows if he even lives in Cupertino anymore? If he still lives there today, he probably uses a Mac now. :mrgreen:

I know I could look for a 6300 WGS instead, but my particular itch is to get that one M24, the one I played and tinkered with when I was younger, to finally work with EGA games and support high resolution color graphics.

From what I have understood so far, the 6300/M24 could still take an EGA (compatible) card without the bus correction kit (as long as one manages to disable the indigenous graphics board), and most EGA applications and games would then still work, as long as they'd been programmed neatly. Some stubborn games would cause problems, though.

Any leads are welcome. And user AT&T6300 apparently has (or had) a 6300 model for sale, which contains the kit. As a matter of fact, I found out about the very existance of such a kit through his offering post.

Any leads are welcome.

digger said:
From what I have understood so far, the 6300/M24 could still take an EGA (compatible) card without the bus correction kit (as long as one manages to disable the indigenous graphics board), and most EGA applications and games would then still work, as long as they'd been programmed neatly. Some stubborn games would cause problems, though.
Click to expand...

From my experiences with a 6300 WGS this weekend (rescued from work!), this is correct. Half the vga programs (has the AT&T paradise VGA board installed which supports 400-line modes, and a fixed-frequency 480-line monitor) have a good palette, and the other half have screwy palettes and I have to run those in EGA mode.

Trixter, I hope you can help me with something else as well:

The good news: Dad and I found out that the video board in our M24 is a revision P8, which can be easily disabled through a jumper on the board (jumper W1, for those who wish to know).

The bad news: to my surprise and disappointment, the ROM BIOS revision on our M24 is 1.36, which I found odd, since we had the machine upgraded with a 3.5" 720KB floppy drive. I had assumed that upgrade would always require a ROM BIOS 1.43 upgrade. Apparently not. The 720KB 3.5" drive has always worked and continues to work fine, even with 1.36.

However, I'd still like to upgrade the ROM BIOS to 1.43. I will need someone in this forum to be so kind to dump the contents of *both* 64kilobit EPROMS that together make up ROM BIOS 1.43. Could you perhaps help me with this, Trixter? I'm going to open up a separate thread with this request, since this is separate from my search for the bus correction kit.

Okay, here are some photos of the bus correction device.

I've tinkered with the lighting a bit to improve the views. As you can see, this isn't a big deal--just a bipolar PROM and a cable that plugs into a bus converter IC socket. There are some other jumpered places on the bus converter board (see the white wires), but I don't know if they have anything to do with the little correction board.

Since I'm not using another display card, can anyone tell me what the IC on the bus converter board was replaced by the ribbon cable? I'll try to get some time and read the PROM out this weekend.
K

I design custom circuit boards. Cloning this would be a piece of cake, and you could get it fabricated for $20-30 at BatchPCB. Or I could put one in whenever I have some room on a full panel and send it to you for free.

The back side is easy. The front will need some more pictures or probing with a continuity tester.
O

Cool, I'll be following this topic closely, I've been looking for a bus corrector for my 6300 as well.

Since I'm not using another display card, can anyone tell me what the IC on the bus converter board was replaced by the ribbon cable?
Click to expand...

It's another bipolar PROM, an 82S123AN on mine. I dunno how to go about telling you the contents of it, though, because I haven't the slightest clue how to read one of those things...

I suspected as much. I'll buzz the PCB out and then read the PROM on this thing. I strongly suspect that a GAL will probably be better than another PROM in the adapter--it's getting harder to find blank PROMs and equipment to burn them is getting thin on the ground.

I have no idea what the jumper block does on this--perhaps un-does the mod? Well, we'll find out...

After we get a prototype, I'd like to borrow someone's original 82S123 so I can duplicate it.
K

You'd need a programmer of some sort. A simple microcontroller (like an Arduino) can do it. You could also rig something to read it through a parallel port.

My gut instinct they're just using the old PROM's socket as a convenient place to jumper across the board. The new PROM probably contains the exact same data.

If that's the case, you could actually do the same thing by carefully soldering a couple wires onto your motherboard.

keepiru said:
You'd need a programmer of some sort. A simple microcontroller (like an Arduino) can do it.
Click to expand...

Are there any plans for Arduino-based bipolar PROM programmers? I wasn't aware of any. OTOH, a few minutes with my PAL dumper will get the right result, with no programming at all--just a matter of moving some jumpers.
K

Chuck(G) said:
it's getting harder to find blank PROMs and equipment to burn them is getting thin on the ground.
Click to expand...

You can easily replace it with a modern EEPROM. Just find something that's level-compatible.

I have no idea what the jumper block does on this--perhaps un-does the mod? Well, we'll find out...
Click to expand...

It's switching A8 between VCC and GND. Basically it's swapping the PROM between two banks - probably one that's the original data, and the other one is something custom. My original thought about it being just a replacement is probably wrong in light of that jumper.

Are there any plans for Arduino-based bipolar PROM programmers?
Click to expand...

Probably. You'd just need a way to level-shift it up for HV programming, right? But I'm not aware of a specific project to do it.

I was just talking about dumping it. There have to be a dozen implementations of ROM dumpers out there.

keepiru said:
You can easily replace it with a modern EEPROM. Just find something that's level-compatible.
Click to expand...

My guess is that a lazy engineer simply used a bipolar PROM to implement some combinatorial logic. Back in 1983, when the M24 was designed, PALs were fairly new--and if you look at the old Olivetti schematics, you'll note that HALs are specified where they're used--meaning the factory mask-programmed parts were originally used. I was guilty of the same sin back then.

My guess is that a GAL will accomplish the same thing. Either a 16V8 or a 22V10 should be more than adequate.

Depending on your level of kludge-tolerance, programming bipolar PROMs can be anywhere from trivial to sublime. The big problem is that programming currents are very high , but basically, you select a cell and blast the outputs with +12v pulses, one by one. If you goof, you toss the part in the trash and start over. This can get to be pretty costly very quickly. GALs are nice because they're erasable and very fast and most modern programmers will deal with them.
K

I took a quick look... TTL parallel EEPROM isn't dead yet, but the speed grade kills it. It's a dying breed, I guess.

It'd be easy enough use a current EPROM, like http://www.atmel.com/dyn/resources/prod_documents/doc0014.pdf . $1 each at Mouser. But if you want to reverse engineer the thing and reimplement it in a GAL, be my guest.

I'm very kludge-tolerant, but I was just talking about dumping it, which an Arduino can do with ease.

keepiru said:
I took a quick look... TTL parallel EEPROM isn't dead yet, but the speed grade kills it. It's a dying breed, I guess.
Click to expand...

But that's not an EEPROM--it's an OTP PROM--you goof, it's compost.

No, I was originally searching for EEPROM... parallel, TTL-friendly EEPROM still exists (for now), it's just 45ns that's discontinued.

Which is why I suggested the EPROM. My other hobby wrecks $10-30 parts, so watching a half dozen $1 chips go up in smoke is nothing.

Still, the GAL hack is neat. I originally thought you were going to reverse-engineer the state table, but if those things have enough flexibility and flash that you can just copy the whole table in, heck, that's an easy way to get it done.

Attached is a dump of the PROM contents--note that half the PROM is given over to a copyright notice! I've never seen that on a small bipolar PROM--usually space is too dear.

Code:
Actually, I'm not surprised by the text at all. Note how A7 is hardwired to GND... Half that chip will never get used. I suspect they picked the chip the same way as the Atmel PROM I grabbed above: technology marched on, and bigger ROMs became cheap.

Looks like you're right about it being a logic hack. I can't see the exact logic at first glance, but there are clearly two related patterns there selected by the jumper. I suspect it all makes sense if you sort it to the right endianness. Good call.

Yeah, you're it for the GAL. I've never used one. I'm just a hack hobbyist.

I'll draw up a schematic tomorrow if I get a chance.

Looking at the schematic of the bus converter, it also appears that CE/ is always enabled. And there are only 7 unique bits in the output (2 bits match one another).

Try as I might, one of the output equations involves 9 terms and I can't simplify it. So it'll have to be either a GAL22V10 or we can go back to the bipolar EPROM. I've got a small pile of TPB18S22s (256x8 ) which ought to do the trick. The GALs seem to be a bit easier to get than the bipolar PROMs--but 5V logic seems to be dying a pretty rapid death in terms of new parts.
Last edited: Nov 11, 2011
K 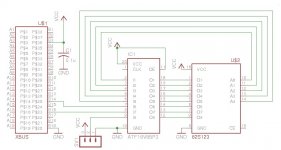 Unfortunately I didn't see your message that the 16V8 wouldn't cut it before I did this. Still, let me know if this looks right and it'll be a simple matter to swap in one of the other chips.