Better to just clean the board well. Solder doesn't stick to oxidized/corroded copper.

Plumber's flux is mostly ammonium chloride which, when heated tends to get everywhere you don't want it to be, leading to corrosion in unexpected places.

Stuff I have been using is acid free and hasn't corroded anything (yet !) but it does get everywhere
D

The most important thing is that it is non-conductive. Even slight conductivity can cause problems over years.
Dwight
V

Here is a homemade tool that I've used for removing through hole DIP parts up to 40 pins.

I've cut a piece of 3/4" copper pipe to the length of the part to be de-soldered. Then I cut the pipe lengthwise with hack saw. For wider parts I made a second cut removing a segment of copper, but depending on density of board, the pipe with a single cut probably can be just bent to create sufficient opening. Then I heat the pipe with butane torch and covered the edge with solder. Here is a picture of three different sizes. 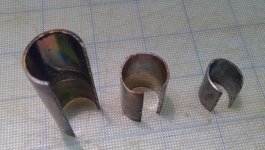 The tool works by fitting it tight over pins and heating the top with small butane torch. The heat is transferred to the pins melting solder around them. At that stage the part can be lifted with flat forceps, for longer part lift one side first, move the forceps deeper under the part and lift the whole. After lifting I quickly remove the pipe from the part. Here is a staged photo of two pipes fitted over the board - for illustration, not a real rework. 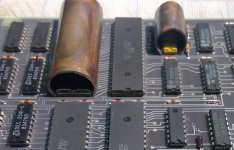 I used these on several occasions, not too often yet to develop a good skill, so I am still quite nervous during operation, but results were all good thus far. For example, I removed Z80 CPU and few other similar sized chips, and I later re-installed them on sockets into the same board, and it worked well. On couple of boards I removed a complete set of DRAM chips to find bad ones and returned good ones back into newly installed sockets. Never damaged a single trace yet.
Last edited: Jul 8, 2020
D

This is a great idea. Fantastic idea.
Dwight

There used to be U-channel shaped adapters for irons that did a similar thing.

How do you clear the holes in the PCB after the IC's been removed?

Chuck(G) said:
There used to be U-channel shaped adapters for irons that did a similar thing.

How do you clear the holes in the PCB after the IC's been removed?
Click to expand...

Once up on a time I used to use a Dremel with a very very fine bit. Not kosher for some, but worked fine for me in some instances. My Pace station was known wreak havoc on cheaper PCB's eyelets even while attempting to be very careful.
V

Chuck(G) said:
How do you clear the holes in the PCB after the IC's been removed?
Click to expand...

I just use a round wooden toothpick that I sharpen a bit with razor blade. With that I poke holes from component side melting solder with regular solder iron from opposite side (board mounted vertically). Then I cut off some of excessive solder on the opposite side with fine flat clippers. This make the site ready for replacement in a short time.

I usually put a socket with round gold-plated connectors instead of soldering replacement chip directly. Having sockets facilitates troubleshooting and later, when the board is working, it can be used for testing other questionable chips of the same kind.
C

The links are now dead but I found similar on eBay. Thank you for the suggestion; I have struggled with this issue.

Chuck(G) said:
You're probably in more danger of exposure if you burn pine in your fireplace.
Click to expand...

for what lead? i burn pine (and hard wood) in my wood stove.

PM 2.5 exposure along with creosotes. It took you over a year and a half to come up with that reply?

You get both of those with hardwood as well. You can burn pine, just make sure its bone dry.